MB: Tell me a little about this book. I’ve heard it’s a good read.

PS: Well yes, and you’ve proofed some of the pages so you have some firsthand knowledge, but I think "a good read" might be an understatement. For me, it was a great read! And that’s all down to Giovanni Battaglin. If he hadn’t been a pro cyclist he might easily have been a pro storyteller. He’s loquacious and entertaining, and his career was such a rollercoaster ride that the unvarnished content of the story itself would make a gripping tale. I tell you, this book’s a real page-turner. The things that happened to him, in races, in his team, his sponsors… for somebody with his palmares, who lives in the world’s most cycling-mad country, for somebody with his status to have had such a turbulent career makes you realize what a big role luck and circumstance can play in pro cycling. And he’s very candid about what happened, like explaining his fear of water, or people he didn’t like, his doping scandal: He didn’t hold back. And then there’s his accounts of big race days. His ability to relive key moments in his career, to bring you inside his head for these events, is quite special. In some cases a good ghost writer might coax out memories and work with the protagonist to add color to the story. In Giovanni’s case you’re almost trying to turn it down a notch, but yes, I had no idea at the outset that translating this book would be such a rich and rewarding experience. Projects like this are the best thing about the career path that I chose.

MB: How did the project come to you?

PS: I’d given some casual help to Giovanni’s son, Alex who is the managing director of the company, to translate a some promotional materials, notably a brochure on gravel bikes, then early last year Alex called and asked if I could help with this book. It was a wonderful opportunity to delve deep into the career of a great pro cyclist that I knew little about, so in the knowledge it could potentially be a lot of work on top of my already busy schedule, I accepted without hesitation.

PS: Yes, it was far more work than either I or Alex had imagined. Looking back, I think probably it was selfish of me to accept the job. My friend Suzan Bianchi in Toronto would have been far better for it. She has several years’ experience as a cycling journalist, she has close family links in Italy and of course she speaks fluent Italian. I have a few words of Italian, but don’t actually speak the language.

MB: You don’t speak Italian? So how did you approach the project?

PS: I’ve had good success with Google Translate in the past, working on smaller projects so I  hoped I’d be able to get by with that and some phone calls to clarify a few details.

MB: But it didn’t work out that way?

PS: Well given a few years and taking an Italian language course I think I could have done it like that, but realistically we quickly knew we’d have to look at an alternative approach. The other problem was with my writing.

MB: Huh, they didn’t like your writing? What was the problem with it?

PS: They were good with my writing in principle, but the way it was coming out didn’t sound right to them. I started off translating a few pages and sent them back for review. Look, you’ve probably encountered this yourself: Translation software can be rather wooden in places, and some of it just comes across as pure nonsense, especially when a person is using an informal version of a language. The translation I was getting from the Google software didn’t give much of a feel for Giovanni’s voice, so I imagined a character and gave it a voice. But back in Italy they said this didn’t sound like Giovanni. At that point I was seriously starting to think about giving Suze Biachi a call. But then they brought Stefano back into the picture.

PS: Stefano Tamiozzo. He’s an Italian guy who’d spent some years in Australia and got fluent in English. His command of the language is excellent, with idiom and expressions. It was a lot of fun working with him, because he was pulling out expressions I’d not heard since living in Australia or the UK. Here in the US people don’t talk quite like that. The only problem with Stephano is he didn’t know much about cycling. Actually, thinking about it, maybe that was a good thing, it might have been more difficult if he’d been an expert. You know how two experts will always disagree on just about everything.

MB: So what happened then?

PS: Stefano used Google Translate too, as it happens, which made me feel a bit better about my original plan. Apparently it’s still a useful tool even if you’re a native speaker. But there was still a lot of translation for Stefano to do, partly because of what I said earlier about the software lacking character, but also it needed somebody with good knowledge of the regional dialect to convey the richness of Giovanni’s expression. Giovanni is a raconteur, he loves telling stories and he’s very good at it. But the thing about Giovanni Battaglin is he grew up as a farm worker’s son in a small town in northern Italy. He has retained his regional dialect and it needs somebody familiar with this if you’re going to retain much sense of his voice when putting it into another language.

MB: Well that brings me to another point, how was the story told? At some point Giovanni had to have spoken to you or the original author, no?

PS: Well yes and no. As I understand it, the book project started out as a transcription from a television documentary about Giovanni’s career, made several years ago. Giovanni was interviewed extensively for the documentary, and I believe the story was told largely using his voice. Then more recently Stefano spent some time interviewing Giovanni in person to embellish the manuscript. No disrespect to Stefano, who did a great job, but a number of the problems started there.

PS: The original source was an issue. Spoken language is quite different from written language. In the original telling there were a lot of chronological jumps. This is normal, it’s just the way we recall things. This led to a lot of jumbling of the timeline, and you had to have a good knowledge of pro cycling in the 70s and 80s to catch these. It’s not that Giovanni was trying to deceive anybody, I don’t mean that at all. But somewhere in the process a lot of the dates got mixed up, so I had to got back to square one with the factual content get it into correct sequence. This meant a detailed study of the stages and winners and time gaps of several stages of the Vuelta, the Giro and the Tour over a span of several years. And then there is Giovanni’s approach to storytelling, he is a very colourful speaker and quite enjoys embellishing and exaggerating some of the details. Look, I love this, it’s part of the skillset of a good storyteller, but when it comes to writing a memoir there’s only so much that can be embellished. But getting back to the main point, most of the hard work was in sorting out the chronology, making sure that the dates and sequence stated in the book matched what the results show for those races. You know what some cycling fans are like, if something doesn’t seem right they’ll go off and check it online and if there’s a discrepancy they’ll go online again to point this out, and not always politely. We all agreed it was much better to get as many of these things as we could tidied up before publication.

PS: I suppose so, but I think if I had to do it all over again I’d have some suggestions to make early in the planning process. I’ve come to realize that a book like this takes a lot of methodical planning before you sit down with the subject and start recording the recollections. I think everybody involved might approach it differently if we had to start all over again. In a book like this you have to begin with a detailed and comprehensive set of results and build it from there.

MB: As you mentioned earlier, I remember you got in touch with me trying to corroborate certain parts.

PS: I got several old-schoolers involved. You, Brian Ignatin, he ended up doing a lot of proof reading and fact checking. He picked up some things that I’d missed, and he did a lot of research into the equipment, the whole triple chainring thing. I had no idea that Giovanni was so technical-minded, of course it makes sense if we consider that he went into bicycle manufacturing after his race career, but he spent a lot of time with the team mechanics during his racing years. He wasn’t a racer who just took whatever they put under him, and this part of the book makes very interesting reading. But I went off track there. Corroborating certain parts: Giovanni was certain that some American racers who had shown up at his cycling clinics in Florida had gone on to compete in the Giro d’Italia. I reached out to Ed Pavelka who had reported on one of those camps, and Robin Morton who managed the Linea-Giovanni Motta team in 1984. We couldn’t figure out exactly who those riders might have been attending Giovanni’s cycling clinic, but he’s adamant it happened so we left it in the book. Bill McGann’s BikeRaceInfo site was invaluable. I spent so much time there, and of course I cross-referenced to other sites like CycleFever, ProCyclingStats, MemoirDuCyclisme, Wikipedia of course, and newspaper archives from Spain and Italy. The people who keep these historical record websites are doing an excellent and invaluable job.

So yes, by the end of it several people had contributed in one way or another, more than I mention above. A lot of people felt the project was sufficiently worthwhile to contribute some time and effort, and I think the result of the very considerable effort is a book with a garrulous narrative told by one of the great names of his generation, and it’s teeming with carefully researched facts. Oh, boy I shouldn’t have said that. Somebody’s going to find something that we got wrong. Look, that’s okay. Giovanni’s narrative style should be taken with a grain of salt at times, and we might not have got every detail perfectly correct, but when it comes to reliving some of the greatest years in pro cycling, I think this book is going to be up there in the Must Read category.

The book is available direct from Battaglin https://officinabattaglin.com/48-days/, and 150 Collector's Edition packages are available including a signed book and maglia rosa jersey. 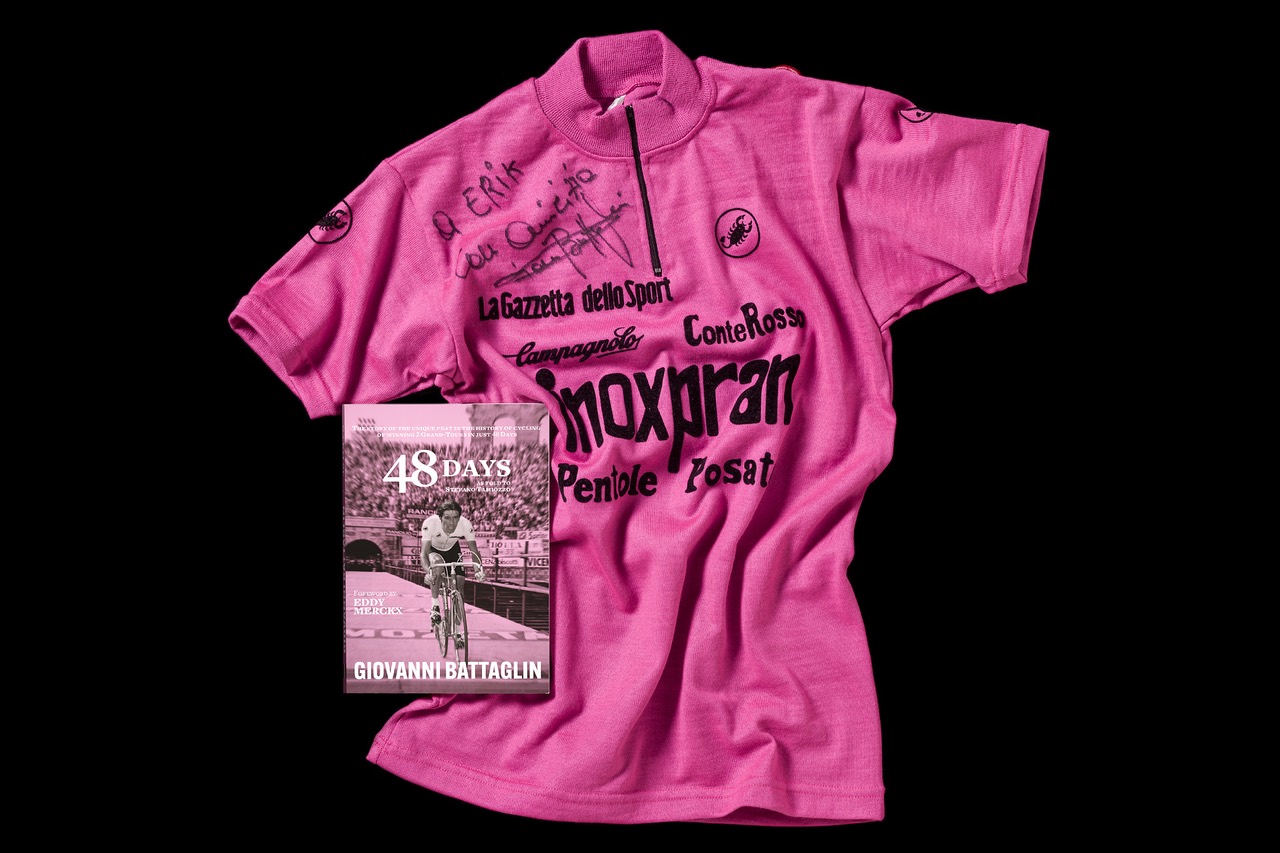