The Berlin Bike Show features some of Europe's brightest bicycle stars, and has carved out a unique niche for itself in the expanding world of artisan bike events.

Berliner Fahrradschau (BFS) would translate to Berlin Bicycle Show. But when the German word for “show” is also used as a verb, it becomes very specific. It means to look for something, but in a calm, concentrated, open way, that is never hectic. It turns out that this interpretation of the name is a good choice for a bike exhibition that has grown into its own class in the last seven years.

Normally at bike shows, you stand around in trade show halls and your voice disappears the first day from overuse, from talking to exhausted company spokespeople if you're lucky, or to clueless booth personnel if you’re not. The main problem is that you don't get to ride the things you're talking about, and you hardly get to talk to the people who had the idea behind the product.

Berliner Fahrradschau is different, in that it lets you talk to all those people in the framebuilder's case, the way you are used to from NAHBS or Bespoked. But then it also isn't one of those specialized exhibitions where mainly the die-hard-handmade-fans gather. Berliner Fahrradschau puts framebuilders in the same hall with Trek, Specialized and the like. And this works out surprisingly well. Because the show – in typical Berlin fashion – prides itself in being “The World's Leading Cycle Lifestyle Fair.“ It allows itself to curate instead of just rent out booth space. And that means it makes sure (or dictates) that all exhibitors follow strict guidelines on how their booths are designed. And it doesn't give the big players those huge booths that would make the small businesses almost disappear. It's a fair game between big and small, and while the biggest booth overall belonged to Italian giant Campagnolo, the company used it to highlight the “Best Campagnolo Build Award“ to winners in their respective material's class. In carbon, that was Tsubasa Bicycles (www.tsubasabicycles.com) from Lithuania. Nevi (www.nevi.it) from Italy took the award for the titanium build, and Jaegher (www.jaegher.com) of Belgium succeeded with a steel build. 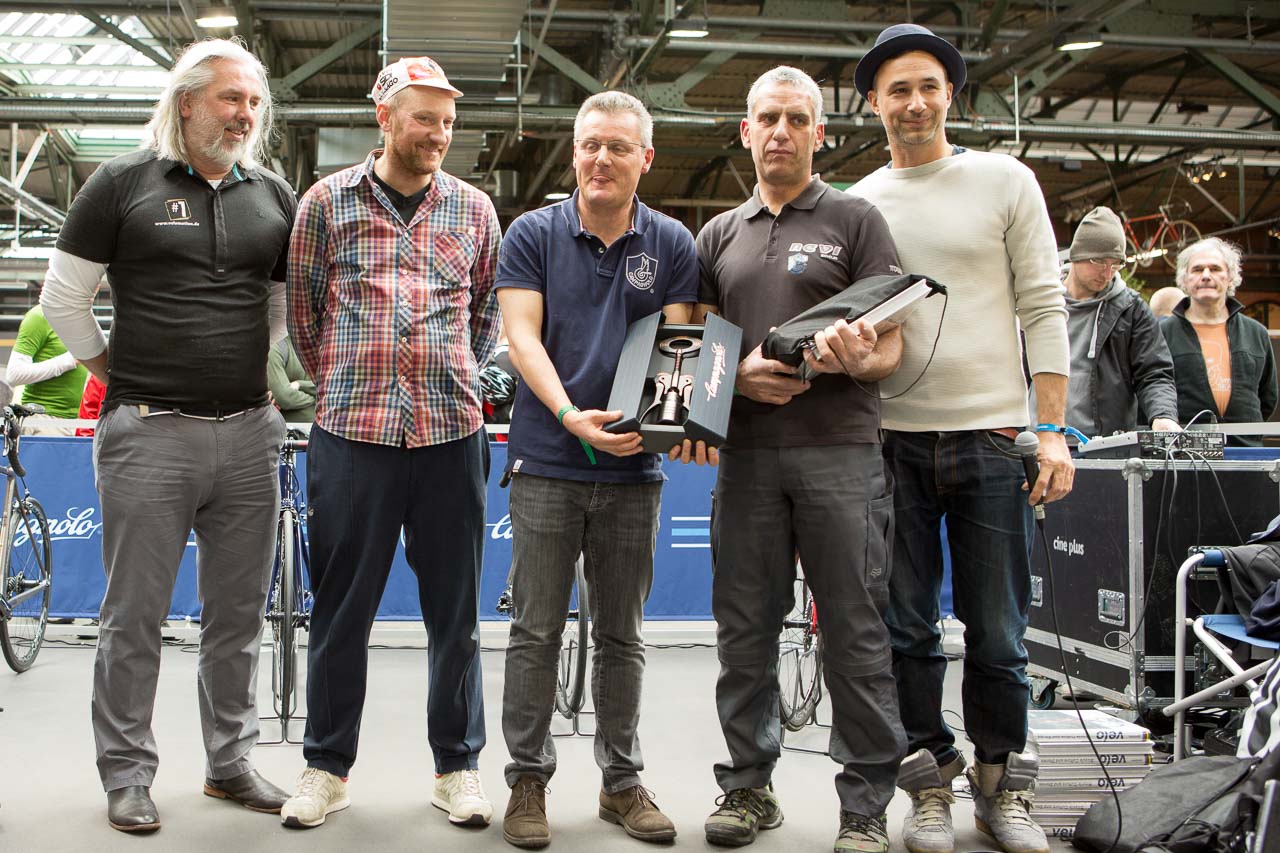 Berliner Fahrradschau's exhibition space is divided into six areas, one of them devoted to “Handmade.“ This space was where framebuilding literally happened: You could see people welding and brazing there. Campagnolo's booth was in the center, with between 20 to 30 framebuilders grouped around that, all of them being Europeans. They ranged from companies like Jaegher as well as Italian classics Tommasini (www.tommasini.com), Zullo (www.zullo-bike.com ), or Passoni (www.passoni.it) to Enve's booth showing the bikes of various great builders equipped with the company's wheels and parts, like Field Cycles (www.fieldcycles.com) from the UK or Troica Cycles (www.troica-cycles.com) from Berlin. 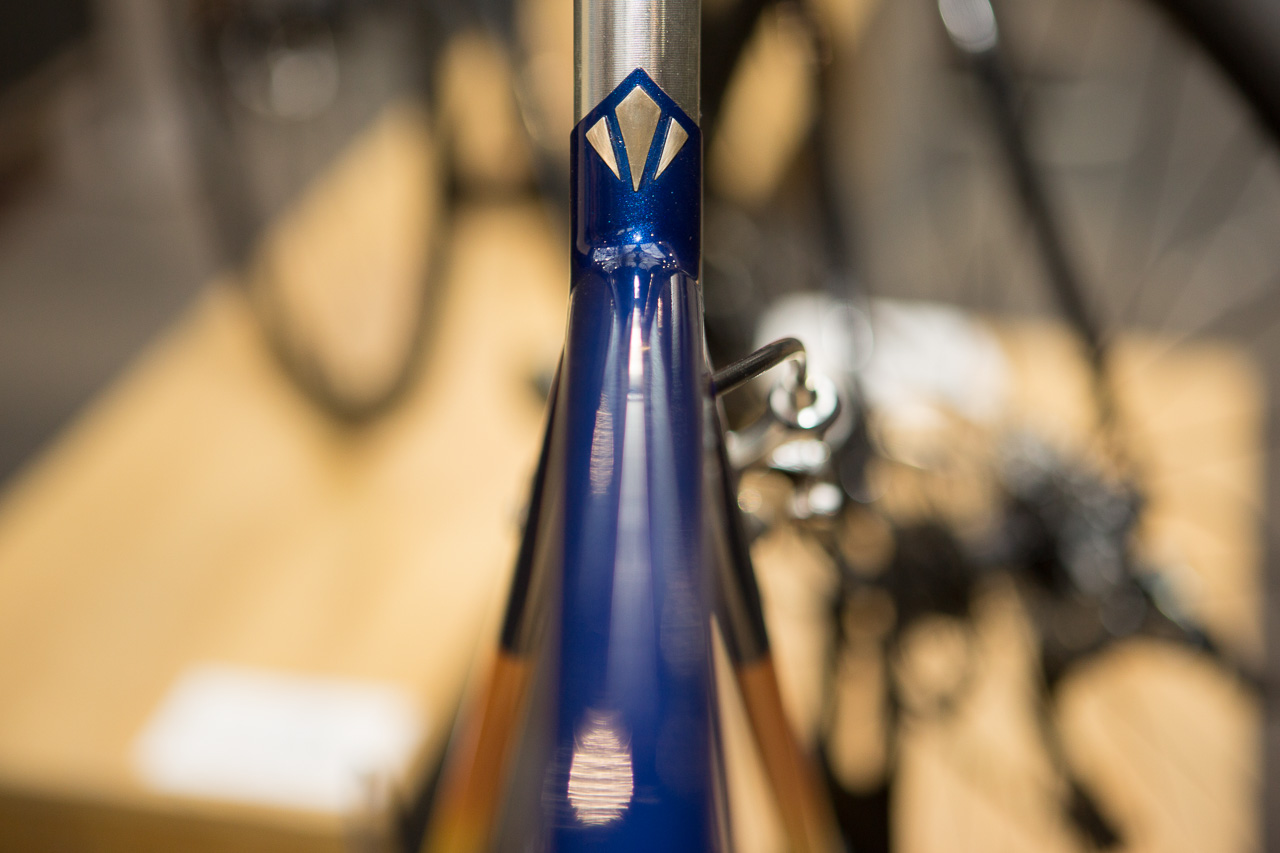 Caren Hartley, of Hartley Cycles (www.hartleycycles.com) in the UK, exhibited three bikes, one of them being her personal road bike on 650c wheels. Matthias Scherer of Mawis Bikes (www.mawis-bikes.com) from Germany – he’s been building with titanium for seven years now – showed his amazing road bike with carbon fenders that were affixed to the frame with magnets. A small pump was hidden in the steerer tube. 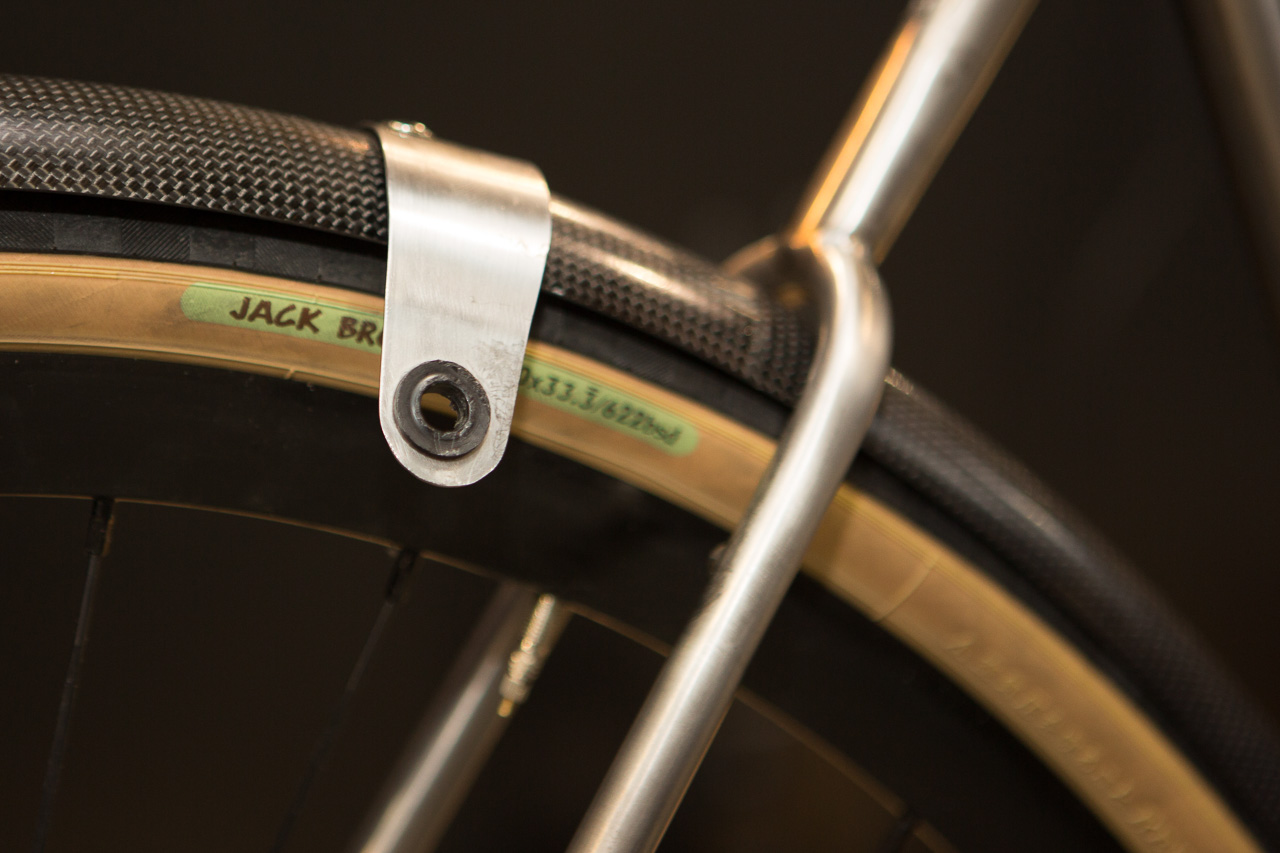 Carbon fenders are affixed by magnets to this titanium Mawis. Photo: Kay Tkatzik.

There was Le Canard (www.le-canard-rahmenbau.de) from Bochum/Germany, a part-time company under the reign of Stephan Ensthaler, showing a 36-inch-wheeled Pinion-driven mountain bike. Bididu (https://www.flickr.com/photos/115499045@N04/) of Luxemburg, a hobbyist brand run by Andreas Thölkes, showed his “Ashi,” built with astonishing attention to detail: A left-side-driven mountain bike making use of a Schlumpf Drive, while the fork was a “Righty“ with a right side brake mount. 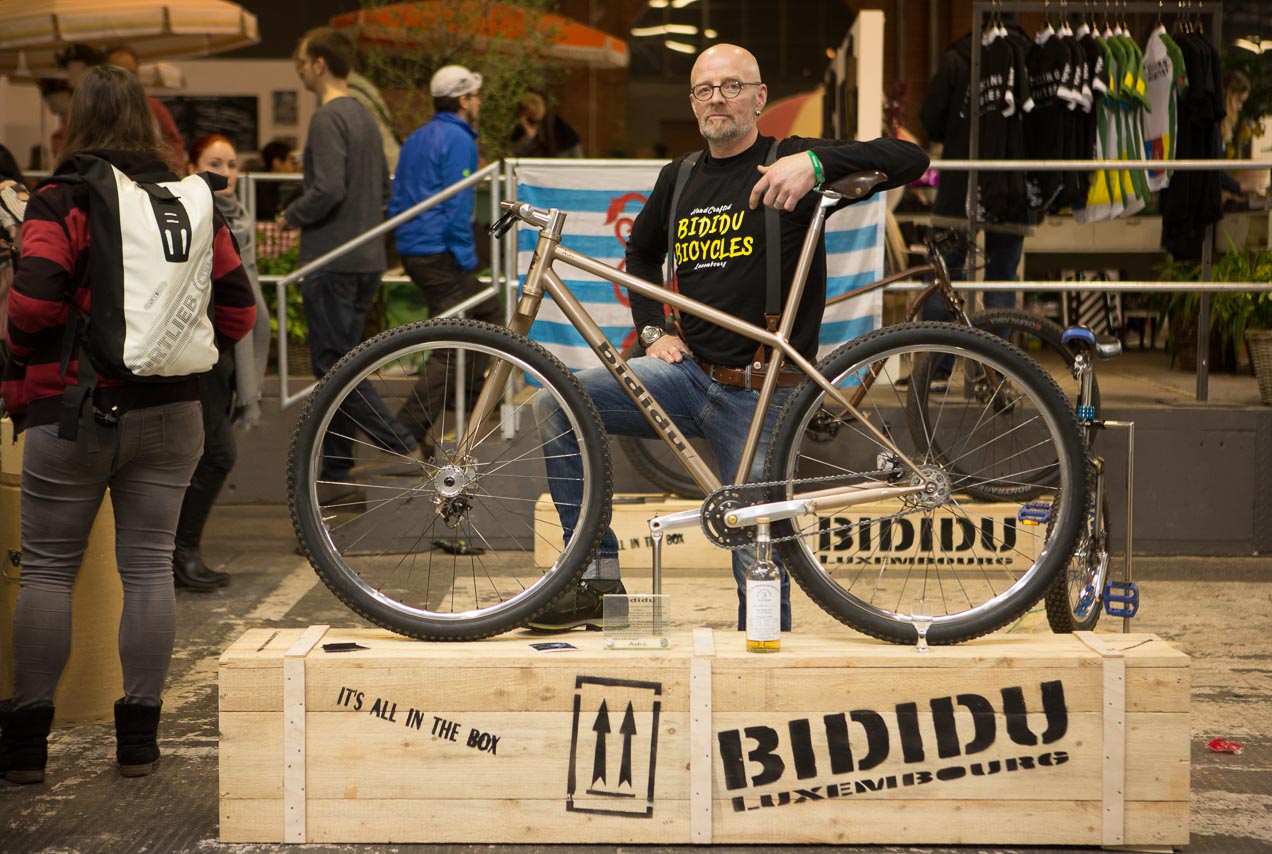 If there is any criticism about Berliner Fahrradschau from the handmade bike perspective, it is that it could use more exhibitors, meaning a bigger framebuilding area. But then again, size is relative, because in the end talking to only a few great builders can be as impressive as seeing loads of typical brands. In fact, you could spend hours upon hours in the Handmade area this year and admire the detail work on Daniel Pleikies' bikes under the brand of “Wheeldan“ (www.wheeldan.de), featuring a titanium tandem with low trail geometry for a front load on integrated rack; or gaze at Thomas Becker's newly founded (and promising!) brand of “Meerglas” (www.meerglas.org), featuring Randonneurs in the classic French tradition with details reminiscent of MAP from the U.S., a brand Becker named as one of his strongest influences. 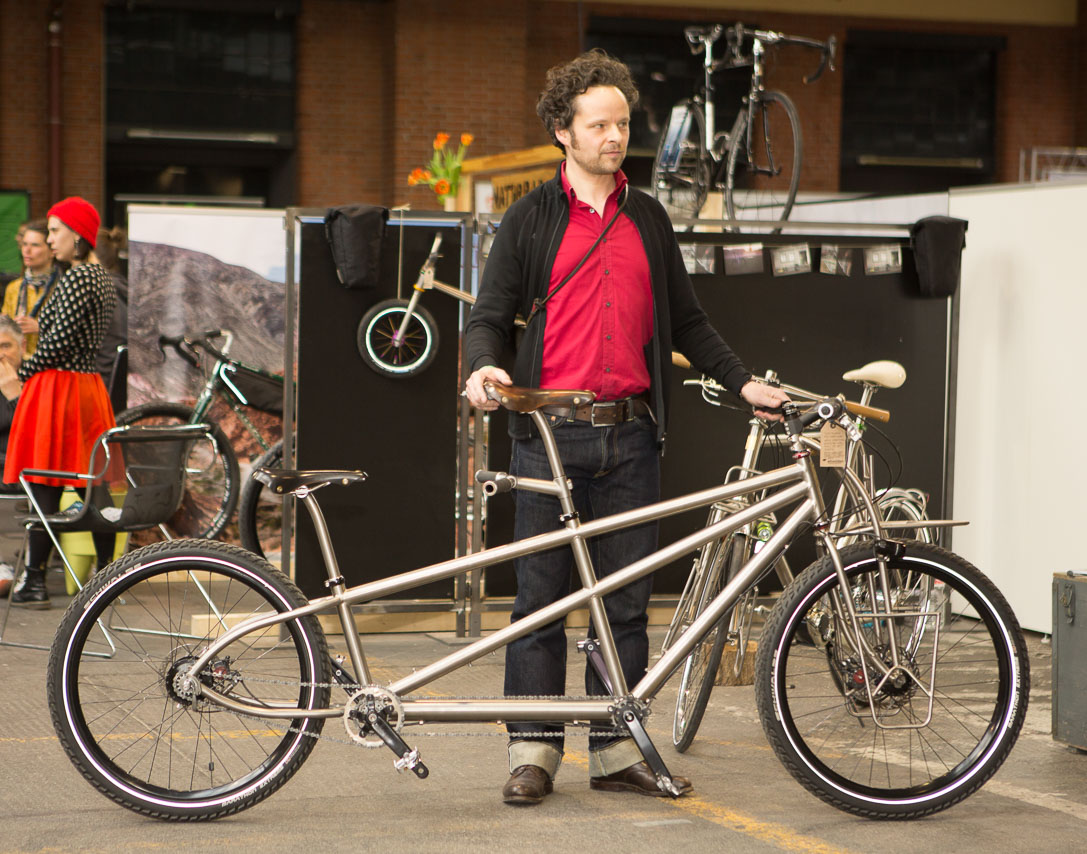 All in all, Berliner Fahrradschau is doing a great job of exposing handmade, bespoke framebuilding to the general cycling public. It is of great value for builders to participate in this show, boasting 22,000 visitors this year. If you go to a show where you expect the cool stuff and people to be, how much cooler does it get than somebody building bikes by hand on the show floor? 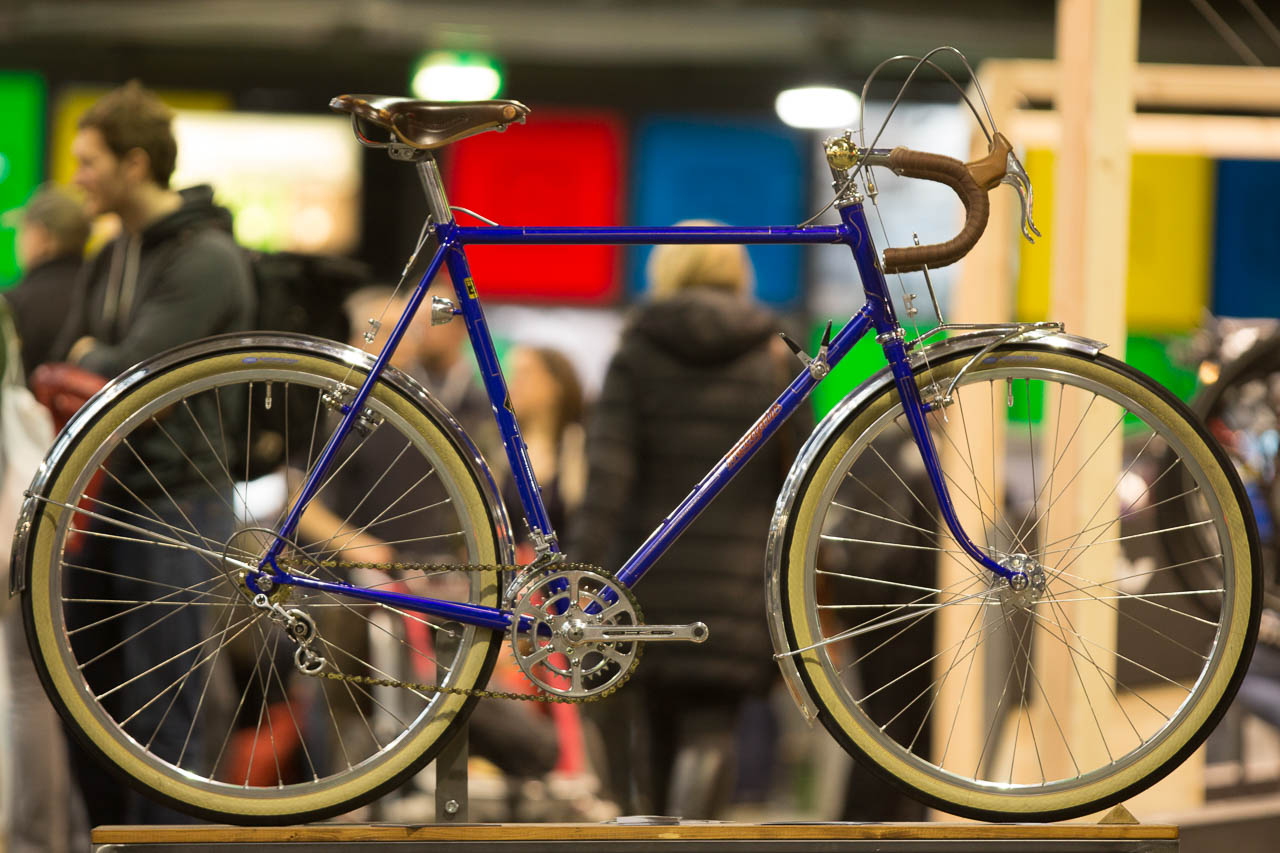 The Berliner Fahrradschau officials know very well how important that part of their exhibition is. “Framebuilders are here for the credibility of the show,” says Fares Gabriel Hadid, project manager at BFS. It’s a give and take between big and small brands, and it is obvious which side brings what.

Berliner Fahrradschau – while not showing as many framebuilders as NAHBS or Bespoked – is putting framebuilding in the spotlight for a public that is seeking the fancy, the new and the cool. It's obvious that custom bikes can be fancy, new and cool with ease. Berliner Fahrradschau makes people take note of that.