At the Classic Rendezvous Weekend, David Staudacher displayed a replica of the French bicycle that Irishman Sean Kelly rode to a dramatic victory at the Italian classic Milan-San Remo in the twilight of his career. 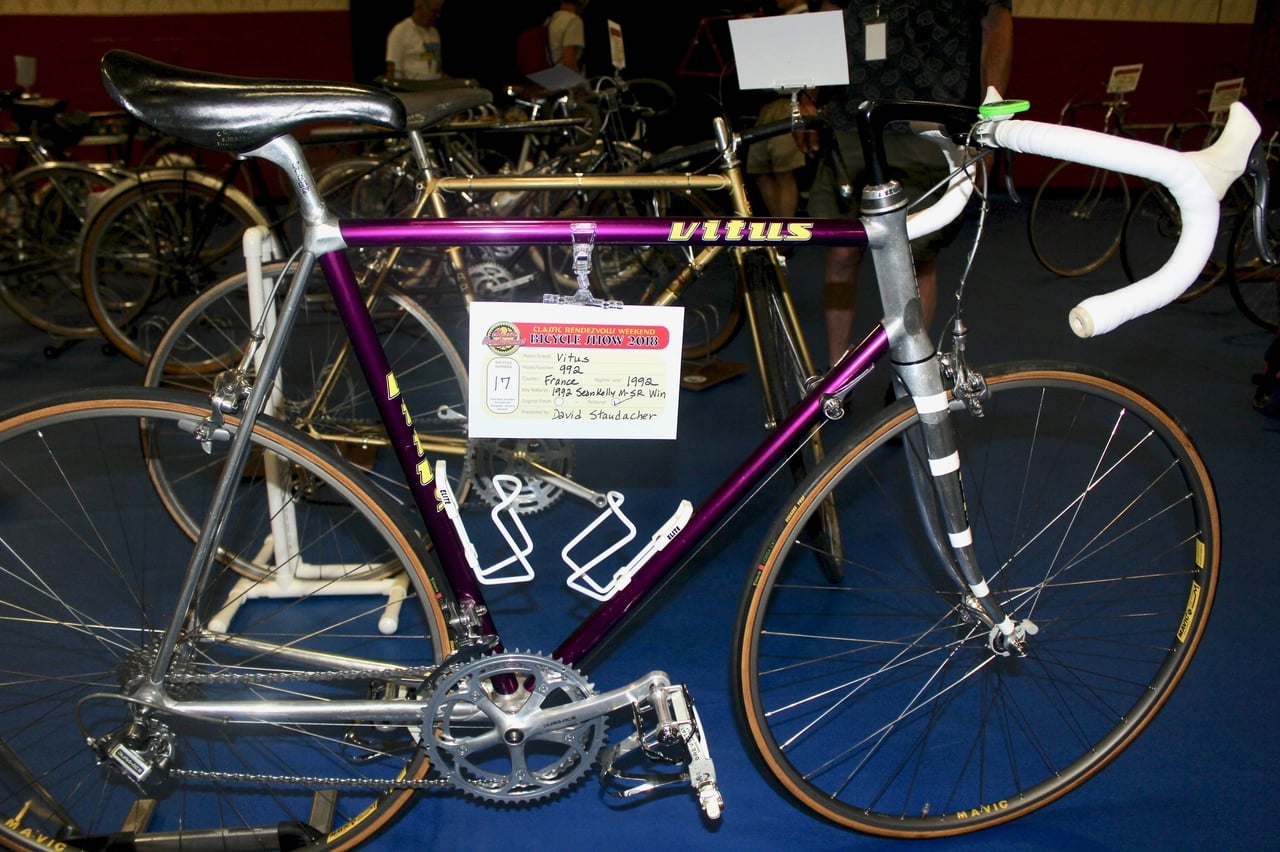 David Staudacher owns a 1992 Vitus with an international race-winning pedigree. At the Classic Rendezvous Weekend, he displayed a replica of the French bicycle that Irishman Sean Kelly rode to a dramatic victory at the Italian classic Milan-San Remo in the twilight of his career.

In March 1992, Kelly was approaching his 36th birthday. An international star of the classics, Kelly had won nearly every spring and autumn classic except for the Tour of Flanders and the World Championships. Proving his salt as a major star of cycling in races other than the classics, Kelly won the 1988 Tour of Spain, Paris-Nice seven years straight from 1982-88, and he finished as high as 4th overall at the Tour de France.

Kelly won Milan-San Remo before, in 1986. Before the late 1990s when the race became largely the domain of the sprinters, Milan-San Remo was the realm of the adventurer; the cyclist who takes risks on the many short climbs and technical, serpentine descents before the finish on the Via Roma in normally sun-dappled San Remo.

Although late in his career, Kelly still had the spirit of a warrior. In his autobiography, Hunger, he writes of his 1992 Milan-San Remo victory:

“What was I thinking as I plummeted down the descent of the Poggio in pursuit of Moreno Argentin? I was thinking of winning, nothing else. I was going to give everything to catch Argentin and win the race. If I finished the day lying on my face among the tomato plants and shards of glass, so be it.

“Over the years the story of the 1992 Milan-San Remo has developed a life of its own. I’ve heard it said that my back wheel skidded around every corner and that I bounced off the walls on my way down, leaving scuff marks on the shoulders of my jersey. That wasn’t the case. Perhaps people feel the need to embellish the drama. I don’t. For me, it was more than dramatic enough.”

Kelly’s storied win came above the wheels of a French Vitus bicycle, the brand that was synonymous with the Irishman throughout his career. This association came about through his long-time French directeur sportif and mentor Jean De Gribaldy, whose relationship with the French brand extended through Kelly’s tenure at the Sem-Mavic, Skil and KAS pro teams. 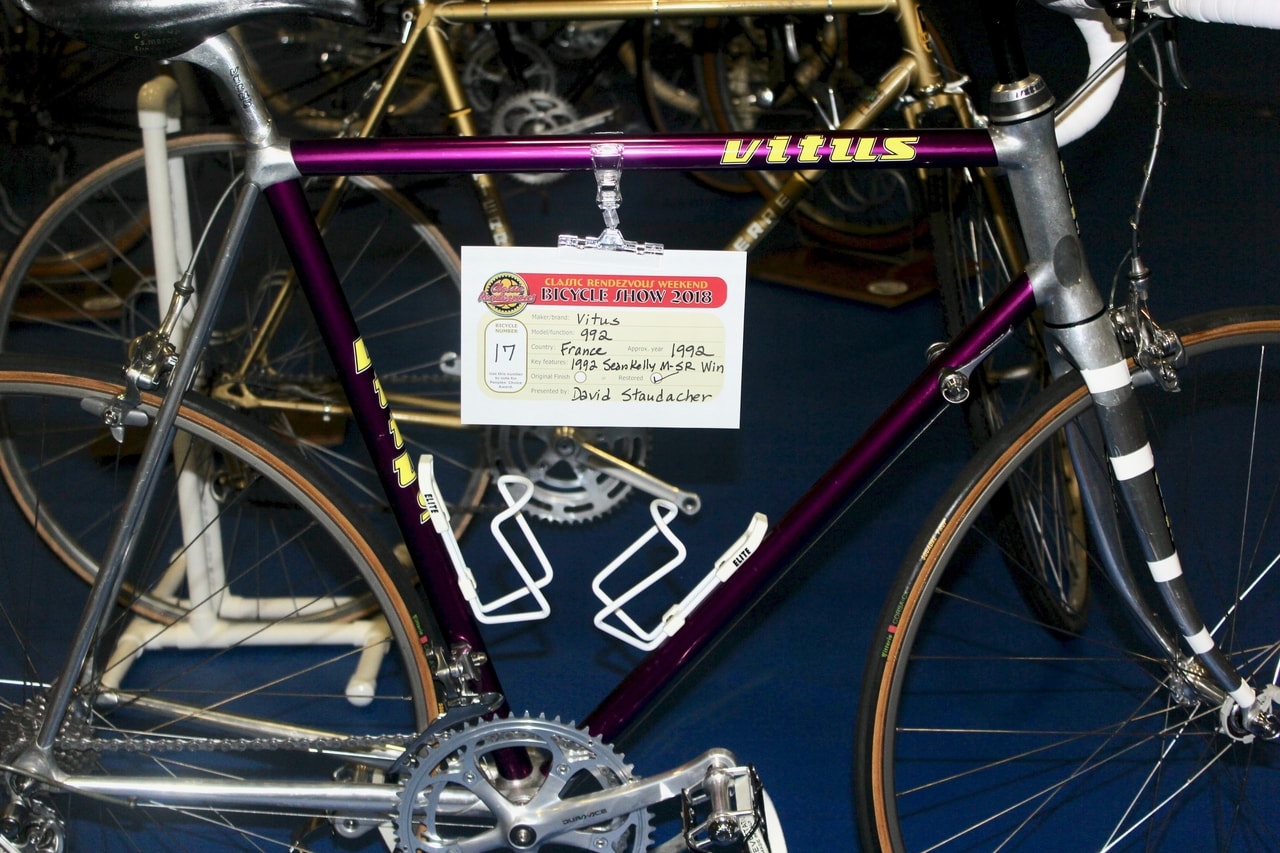 Along with its Italian counterpart, Alan, Vitus developed the bonded aluminum frameset. Straight gauge, small-diameter tubes were fit into aluminum lugs and secured by adhesive. Vitus frames were often referred to as having “screwed and glued” construction, but it was only Alan who actually used threaded fittings. Vitus frames relied on a tight fit and strong adhesive. Vitus model 979 “Duralinox” aluminum frames came out in 1979, and they were followed by a carbon fiber version in the early 1980s.

Vitus actually got their start in the bicycle industry manufacturing steel tubes for other French brands, notably St. Etienne neighbor Peugeot. The top tube set was TXO, which was a chromium-molybdenum-vanadium tube set in 0.8/0.6 gauges with internal ribbing. While a good number of French builders used Vitus, its use never crossed borders, nor was it a really strong competitor for Reynolds and Columbus. By 2000, Vitus ceased production of steel tubing.

Although technically still handbuilt, Vitus 979 aluminum framesets were production units, and due to the production techniques, custom frames weren’t an option for the pro team riders the way they were for riders on steel bikes at the time, who could use a frame made by a favorite custom builder and painted and decaled in the livery of the team’s bicycle sponsor.

Kelly was a powerful, yet average-sized cyclist, and so the comfortable - if somewhat flexy - ride of the Vitus 979 was an appropriate accomplice to many pro race victories. It’s been postulated that tall and heavier riders, such as Kelly’s long-time teammate at KAS and Festina, Swiss rider Thomas Wegmuller, rode stouter steel framesets specially painted in “disguise” as a Vitus, but there’s no good way to confirm or debunk this suspicion.

By 1992, Vitus responded to some of the criticisms of excess flex by using ovoid shaped aluminum tubes and a one-piece headtube unit to increase the stiffness of the frameset. The fork is a threaded, 1-inch diameter design that presages later threadless designs with an integrated bottom bearing race. The result was the Vitus 992 that Kelly and other riders on the Festina team used. 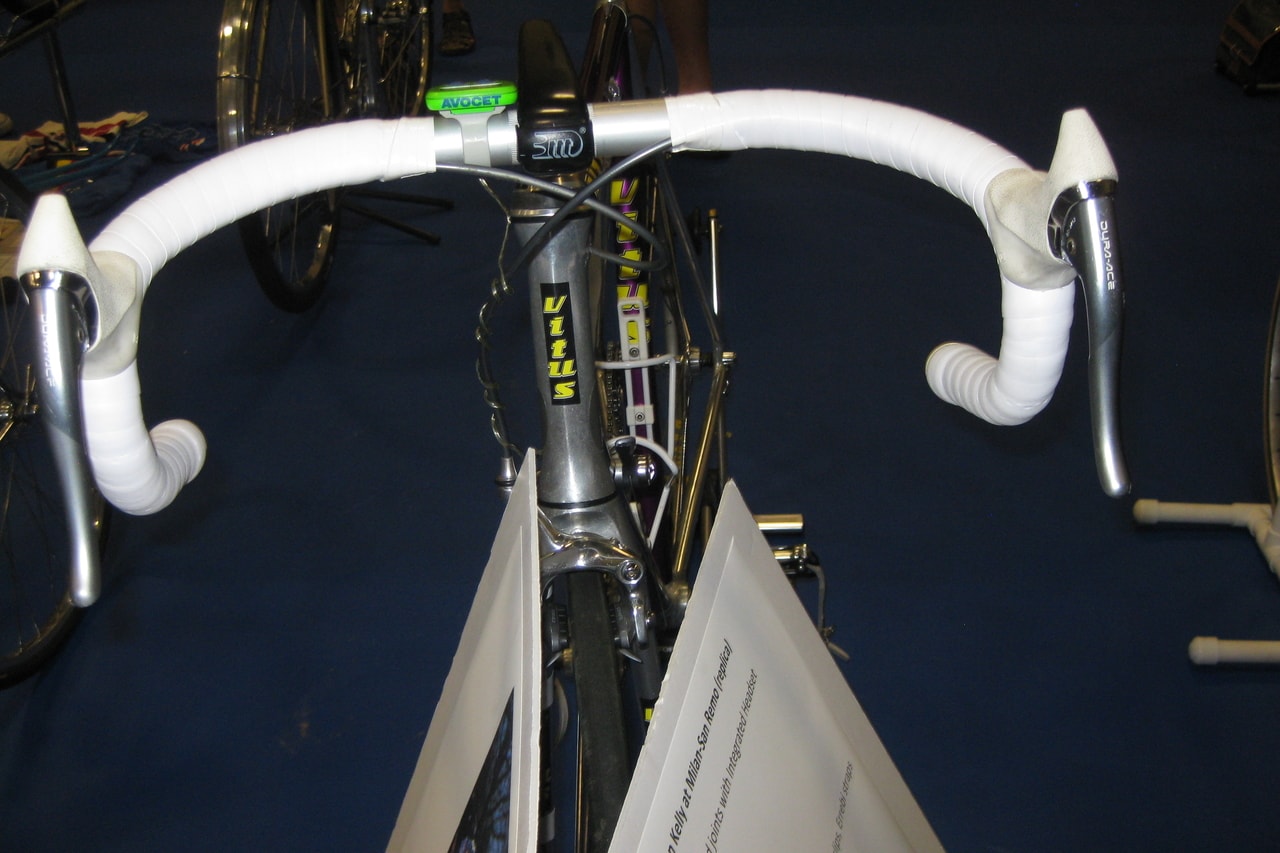 Staudacher’s historic replica bike comes in the anodized purple finish of the Festina team, which was a multinational mix of riders and staff registered in Spain. When the team rode on the Iberian peninsula, they were known as Lotus, which is Swiss watchmaker Festina’s brand in Spain.

Adding to the international flavor of the team’s equipment set up is the Shimano Dura Ace groupset. For much of his career aboard Vitus bikes, Kelly used components from fellow French manufacturer Mavic. For 1992 and 1993, Festina used the Japanese maker’s offerings with a few idiosyncratic touches for their Irish star, including Campagnolo Super Record pedals and Christophe Special toe clips and Errebi straps.

Another interesting detail from Kelly’s story about his 1992 Milan-San Remo win concerns the team’s incentive to win the race.

“The night before the race, we were chewing the fat over dinner and someone told the story of the 1979 race, when the boss of the Gis ice cream company that sponsored one of the top teams promised his star rider Roger De Vlaeminck he could have his Ferrari if he won. The next day, De Vlaeminck won. He took a shower, collected the keys to the boss’s Ferrari and drove his prize all the way back to Belgium.

My team-mate Acacio Da Silva turned to the Italian rep from Festina Watches and said: “What do we get if we win tomorrow?” The rep promised us a top-of-the-range watch.”

Kelly duly delivered the result, but the prize - in typical fashion for the Irishman and much like the understated workhorse Vitus bikes that he often rode to victory - was a bit less Italian flash and braggadocio than his Belgian compatriot’s Ferrari.