Having disappeared from the cycling world for a few years, Chris Chance is back and doing it just like before. 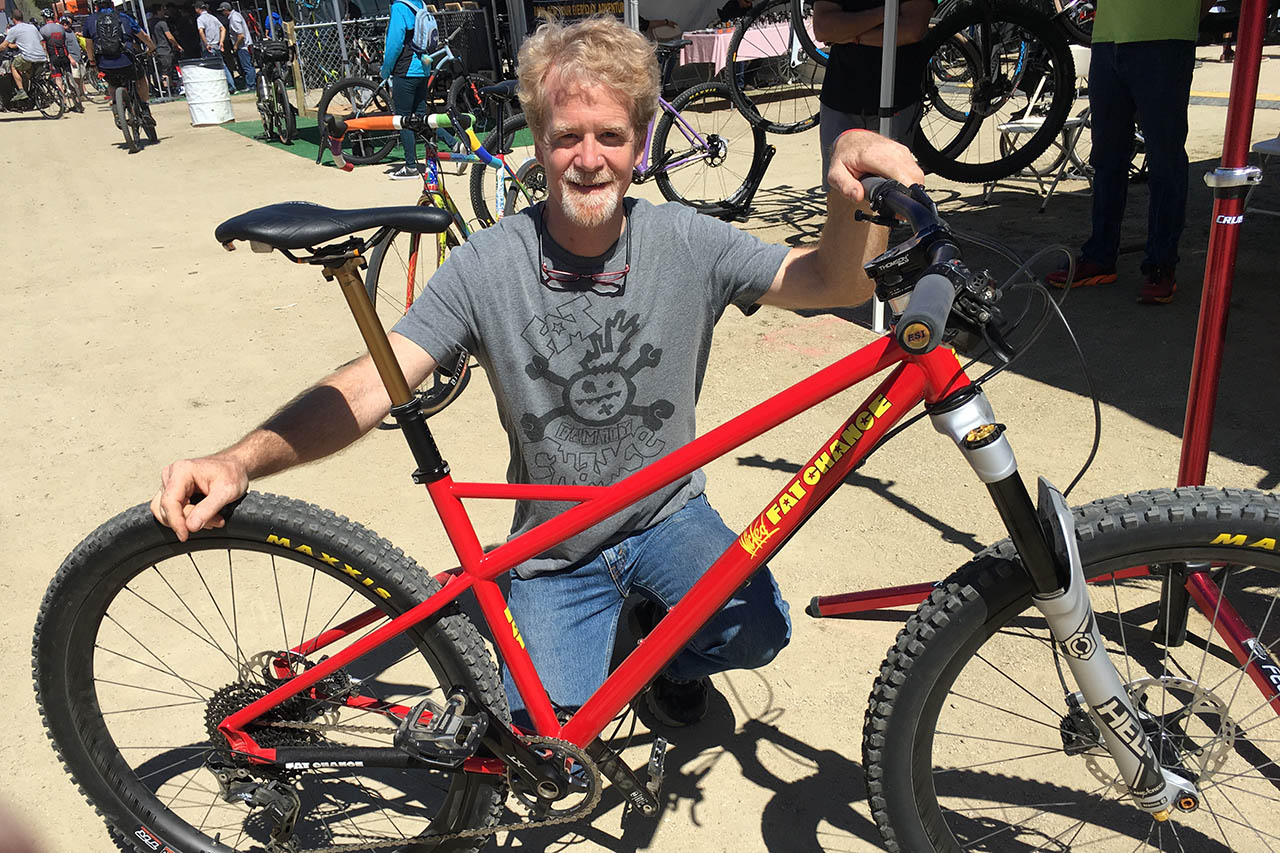 The Fat City Cycles / Fat Chance combine was widedly-known and respected in the 1980s and 90s, as mountain bike innovator and producer of great dirt bikes.  Located on the East Coast with roots to Richard Sachs and Peter Weigle, the bikes were known for handling as a bike should, as an extension of the rider.

Added to a great lineage, the company exhibited a sense of humor that worked globally, with a bunch of bike names that happily played on founder Chris Chance’s name. Even roadies smiled on seeing the ads. And when the ‘Slim Chance’ road bike frame came out and instantly developed a following, the already iconic brand expanded its reputation.

Then Chris Chance left the industry to pursue other endeavours for many years. But in 2015 he returned to his roots and re-launched Fat Chance Bicycles in Marin County, California. The company and its frames’ reputation was still sky high amongst those old enough to remember, and it has quickly re-established itself across the industry.

New this year is the Wicked Fat Chance Enduro mountain bike, which sports a 65 degree head angle and 140 mm travel fork to help the rider keep that bike upright at high speeds. 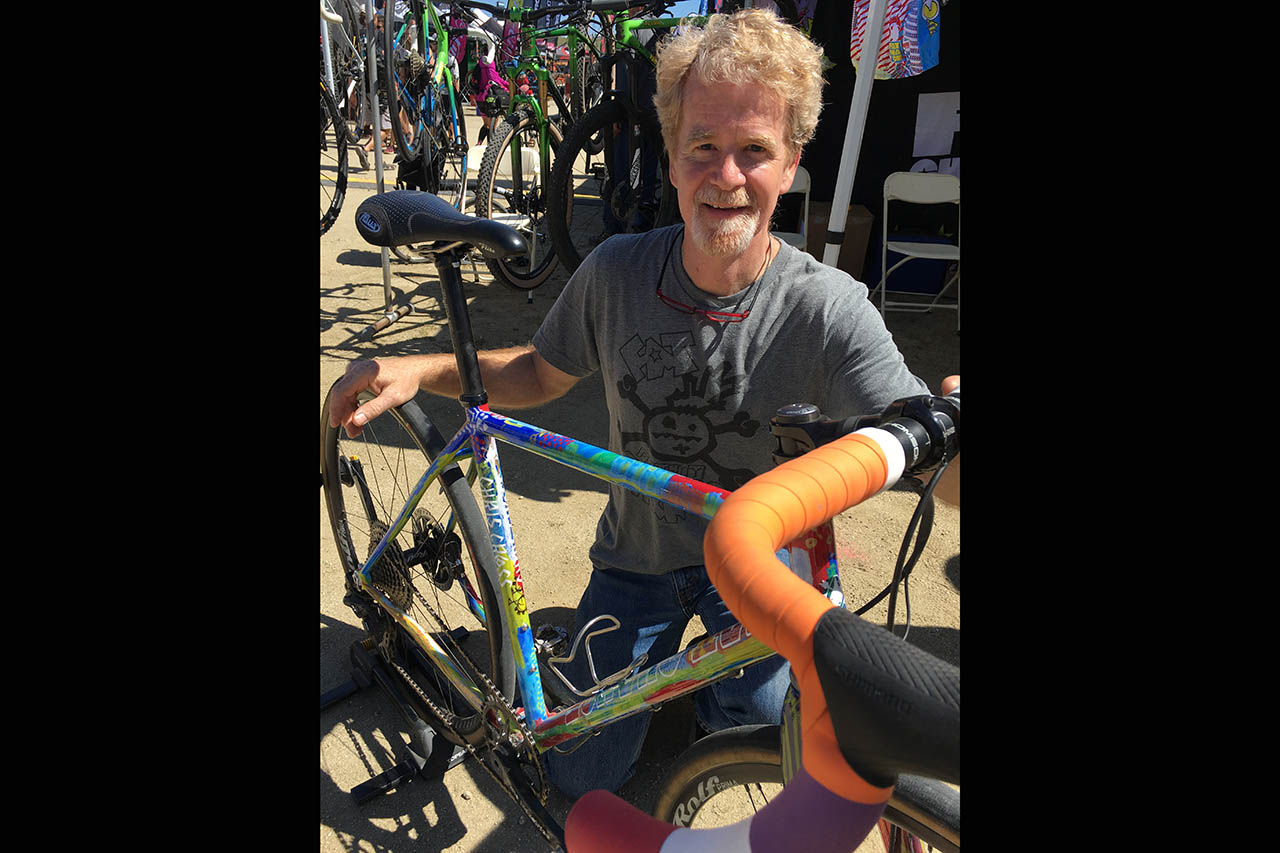 “I’ve never done anything with a 65 degree head angle before, that’s new territory for me,” said Chris Chance, Founder Fat Chance Bicycles. “But this has me really excited.”

Chance said it’s a long way from the 68.5 and 69 degree head angles he used on his Fat Chance and Wicked Fat Chance mountain bikes in the 1980s, but the design works. “When riding this bike it is a dialled-in performance machine. With that front wheel way out in front of you, you can go a lot faster over challenging terrain.”

The bike on display is new this year, and was completed only a few weeks before the show.

Another interesting bike in his line-up is the Yo Eddy 2.2, which can be run as a 1x11 or a single speed. Chance was happy that the Single Speed World Championships would be held in Bend, Oregon, later this year, and noted that on the single speed he had displayed.

The gearing is not the only thing flexible about this bike: Either 27.5+ wheels and tires will work, or 29r wheels. Between gearing and wheel changes, this is a platform that provides one bike, many uses.

For this bike, Chance took his 29 frame and did some significant design work on the rear triangle to accommodate the fat 27.5+ tires. A new CNC machined ‘demi-yoke’ was designed along with proprietary-design dropouts and brake mount. 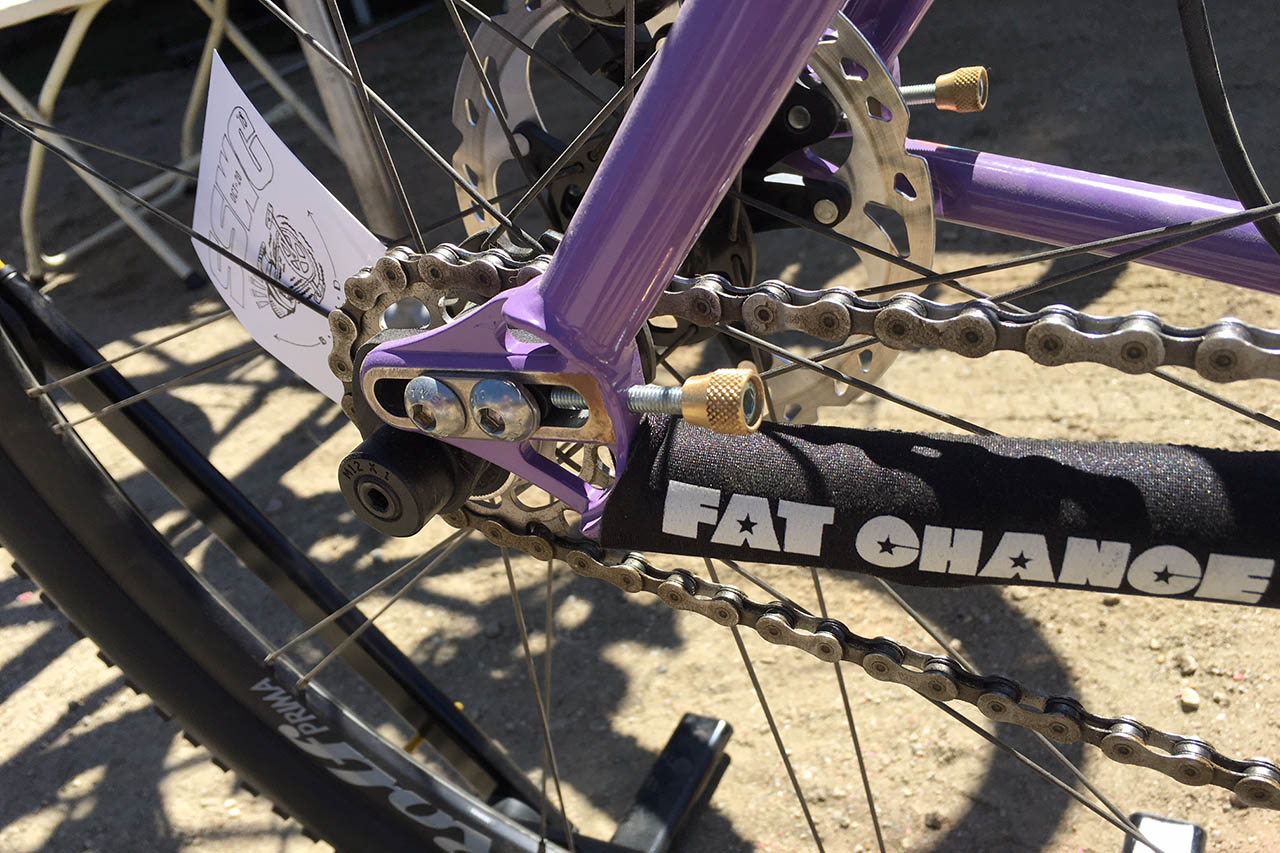 The Yo Eddy now functions as single-speed or a geared bike.

Chance sells a lot of frames with standard geometry, but he has no problem going custom when needed, for example in the case of unusual torso and limb dimensions, when non-standard tube dimensions are required to properly fit and balance the rider on the bike.

Since going outside tested standards produces what are effectively prototype bikes, custom geometry is a subject he approaches with great care. “We are set up to do custom sizing,” said Chance, “but we prefer to get some very specific numbers, perhaps from somebody who has a bike dialled in already or someone who is getting a proper professional fitting done.”

“We have a couple of different avenues we can take. One is to send a customer instructions to get body measurements, or preferably have them go to a fit shop to get body dimensions.

“The other way, which I prefer, is if they’ve been fit on a bike already or if they’ve been riding long enough to be dialled in on a bike or bikes that work for them. I send them instructions on measuring up the bike dimensions they have. That’s more accurate.

“We get some customers with a bit less cycling experience who are buying the bike because they know the brand, but usually our customers are people who have had bikes and know what has worked for them. You can trust those numbers.”

Custom paint is of course an option, and at Sea Otter a Chris Cross bike for gravel/bikepacking/cross was on the floor with a multi-color splatter paint job by Sara Slawta.

The exact steel used for the frame will vary with rider weight, and the purpose of the bike as well. He still has a limited stock of True Temper for his Slim Chance road frames, while Chris Cross frames use his custom mix of Reynolds 853 and Columbus tubing. The Fat Chance line uses steel from a supplier in Taiwan.

Chance said that he had built several frames from steel supplied by this company, and then tested them thoroughly in destructive testing. “The tubing is strong and consistent, and the company produces the steel to the exact wall thickness and diameter specs I request.”