Anna Schwinn is at Bespoked helping out, judging bikes for the show awards, and reporting for HBG. 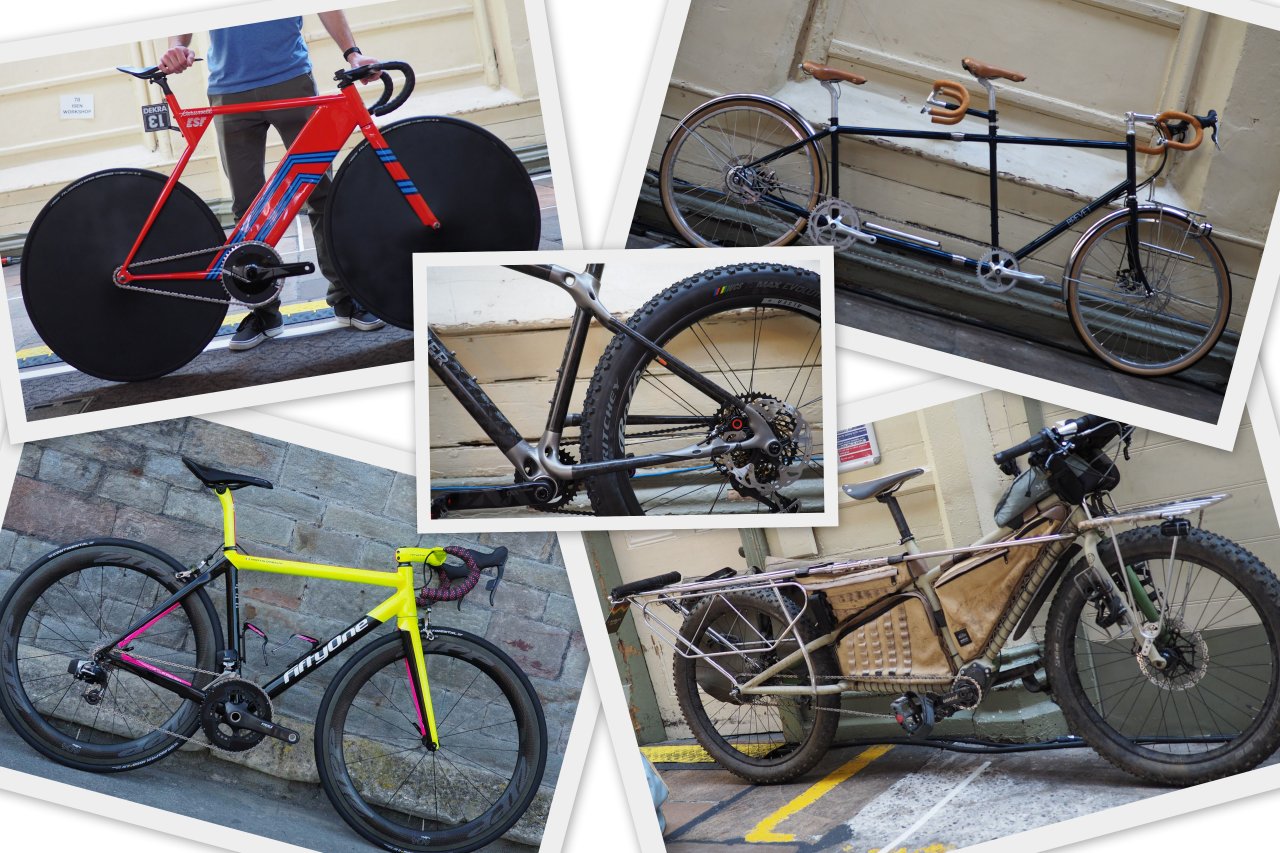 With the UK still in the stride of its latest bicycle boom, Bespoked has become the best place to watch the evolution of this current wave. This and following articles focus on some of the most eye-catching bikes on display at the storied Templemeads venue.

Karussell’s 3Rensho Tribute
The second-year Slovenian builder David Krev developed his own approach to execution for the extreme down tube cross section, with a 0.6mm steel plate down tube fairing that visually splits to hug the seat tube at the bottom bracket cluster. The frame is TIG welded, with the exception of the seat stays and dropouts, using a polymer filler rather than brass so that the frame can flex without cracking the thin-walled tubing. The whole affair is wrapped up in Lancia Martini livery (in case the form of the frame wasn’t fast enough for you).

Sven’s Expedition Surf Bike
The customer wanted a bike that could go from hauling surfboards to the beach to off-road expeditions without a lot of fuss. The collaboration (which is still ongoing - this is only the first iteration of this build) yielded a unique, dual personality bike which manages to maintain a lot of Sven-equse style and flair. The drive side of the bike is painted in beige and the non-drive in green, with Cape Town maker Sealand bags to match each personality. The massive support strut that runs the length of the frame to hold cargo or surf boards (depending on the day), is polished for surface durability no matter the terrain.

Brevet Cycles Coupled Light Touring Tandem
“Stoker stems are usually quite beefy and not elegant.” Sebastian Klein’s solution? A rotated quill stem, allowing the stoker to have a range of adjustment without a collection of extra bolts and clamps cluttering up the stoker cockpit. This nice detail is one among many (integrated lights, masked stainless stay bridges, and subtle rear view mirror bar end plugs, etc.) on this darling coupled tandem, built for a tall husband and short statured wife riding team for short weekend tours with minimal gear.

Metier Velo’s Gnarly 3d Printed Titanium Lugs
When Jamie White was commissioned to design a set of lugs for a project with French 3D printer Polyshape, the Canadian builder (by way of the US) took the opportunity to push the concept beyond his typical clean design. While adding voids actually adds a little bit of weight to each lug, they allow for interesting opportunities in cable routing without outward-facing cable ports. Plus, White liked the aesthetics so much, he had a set made for himself for his own bike.

FiftyOne
There is so much going on visually with each FiftyOne bike that it can be easy to forget that beneath each over-the-top complete package styling (shown) there is a deeply technical speed machine. Now that the company has adopted Plasma Appelation Treatment to remove the top layer of epoxy from the carbon matrix in bonding areas to produce stronger joints in their frames, they are able to drop even more weight from an already impressively svelte frame.

Editor's Note: In the coming days, alongside Anna's coverage, we will run some still-relevant stories and videos from the 2016 Bespoked that we have not yet published.