A show in a show, in a show: that's the artisan section of the Vancouver Bike Show, and it's a small handful of bicycle makers at that. Small maybe, but cycling is a big thing in BC, and their framebuilders are world famous with good reason. 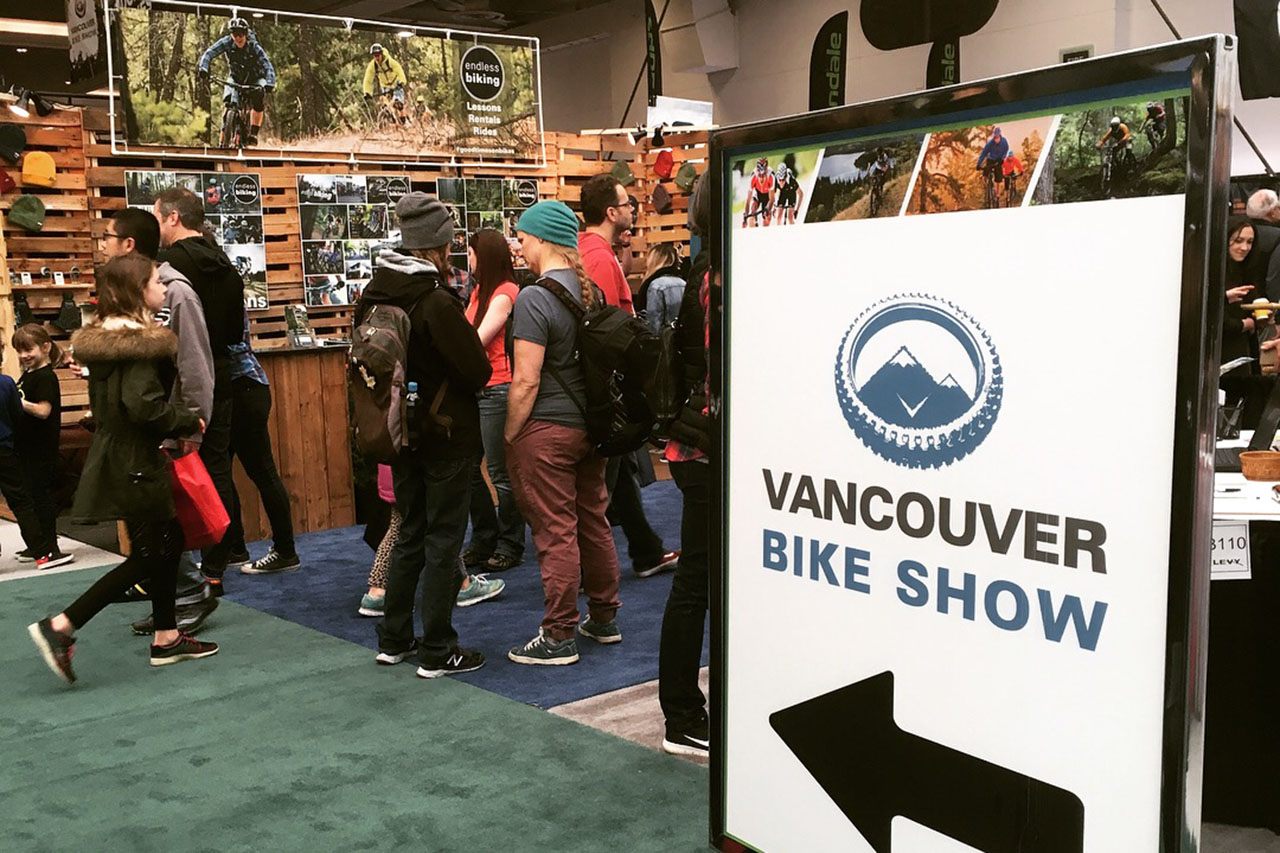 Founded in 2011 and held annually since then, the Vancouver Bike Show runs alongside the Vancouver Outdoor and Travel Show. The bike show itself is a little like Philly Bike Expo, with a wide range of companies and activities. Run by former mountain bike pro Seamus McGrath, himself from BC, the show has always featured a raft of home-grown pro cyclists. Inside this bike show area there's a custom builder's section named Made in BC. Held March 3-4 this year, the Vancouver Bike Show presented BC frame builders with an opportunity to show both old favourites to regional enthusiasts, including some NAHBS award winners and some new designs.

Sam Whittingham of Naked Bicycles and Design has become a regular at the Vancouver Bike Show in recent years. He told us about the show from his perspective.

"It’s a small show, but it's good for us. At Naked we’ve been pushing to get more local customers. This is why we’ve been sponsoring a local racing team, and it's why we’ve steered away from the US shows. We still do international orders, but a few years ago I was finding those made up a disproportionate amount of my business and I wanted it to be more Canada-based."

At bike shows since the first time Naked went to NAHBS, the bikes at their booth have always looked stunning. Part of this is the way Sam Whittingham builds and his finishes his bikes, but also it is because of his skill in presenting his bikes, literally, in the best light. Having worked in theater set design in his younger years no doubt helps. His booth included an experimental hardtail mountain bike, Mikal Dyck's cyclocross bike, and a new titanium road model coming out of a workshop that has awlays produced steel frames.

The Naked booth shows how to do bike lighting. Photos: David Johnson

Paul Brodie is one of the most famous British Columbia builders. In recent years he has focused on running a frame building class at the University of the Fraser Valley. He made the Whippet as part of his contribution to the class and took it to NAHBS in 2012 where it won the People's Choice award. The design brilliance of this sprung bike makes it a classic, and although it's been seen before it's a bike that can stand being shown over and over. Click for Brodie's project notes.

Sam Whittingham: "The Vancouver Bike Show is mostly an outdoor and adventure travel show. Within that show there’s the bicycle show, and within that there is a Made in BC section. Within this thirty foot by thirty foot area there are 6-8 companies. We were surprised at how many people came into our section. They're asking different questions to, say, NAHBS. There are lots of bike riders here, but they're less geeky. A huge amount of traffic in the Naked booth was current and past customers. Some are people I've never met face to face, or haven't seen in a long time. They come to say Hi and tell their own stories about Naked bikes, and that's different to NAHBS: we wouldn’t get that outside Canada. At one time we had three different customers talking to each other about their Naked bikes. One from 14 years ago, one who's in the process of having a frame made, and one who's on the fence. It was great! I didn’t have to do anything, the other two were persuading him to jump in. There were a few people visiting the booth who’ve been on the fence for a while and were there to get a better feel for if this is actually what they wanted to do. Not so many sightseers, it was mainly people with a genuine interest.

Like Brodie, Chris Dekerf displayed a striking-looking NAHBS award winner he'd built a few years back. His bike won the artisan award at the 2016 edition of the show. HBG recorded a video of Dekerf talking about the bike at the 2016 NAHBS. A prolific builder with more than 5,000 frames to his name, Dekerf's booth included several frames and complete bikes. One he was keen to point out was a lustrous red road frame.

One of several eye-catching bikes in the Dekerf booth. Photo: Chris Dekerf

A newer company that offers custom geometry is BearCraft. One of the bikes they showed, the Pilsner, is the first to carry the BearCraft logo on the headtube. It is a durable adventure tourer built in heavy guage titanium, built with a Pinion gearbox, and with fittings for an optional electric assist system. Click for Roman's project notes.

With 29+ tyres and Cane Creek's Thudbuster seat post, this is sure to be a comfy ride. Photo: BearCraft

Sam Whittingham: "The BC framebuilders are pretty tight. We're all friends, I go out to visit Paul Brodie from time to time. At various times several of us have done work for each other, so occasionally the lines get a little blurry. One of the companies, I'm not a hundred percent certain, but I think I might have built a prototype for them back in 2003. It was a hardtail mountain bike. In 2003 nobody was doing that, and I thought 'no way!' But they went ahead and did it, and now they make great hardtail bikes for the BC terrain. It's Chromag. I showed them a design for my new hardtail. For me it's a progressive design. I've not ridden it yet and don't know if it will quite work, but Chromag has gone further with some of the ideas I built in and they seemed pretty sure it would ride well. Click for Sam's project notes.

Focus articles on bikes mentioned in this article are linked in the text. In these articles, the builders talk about the reasoning behind the frame design, material and component selection.