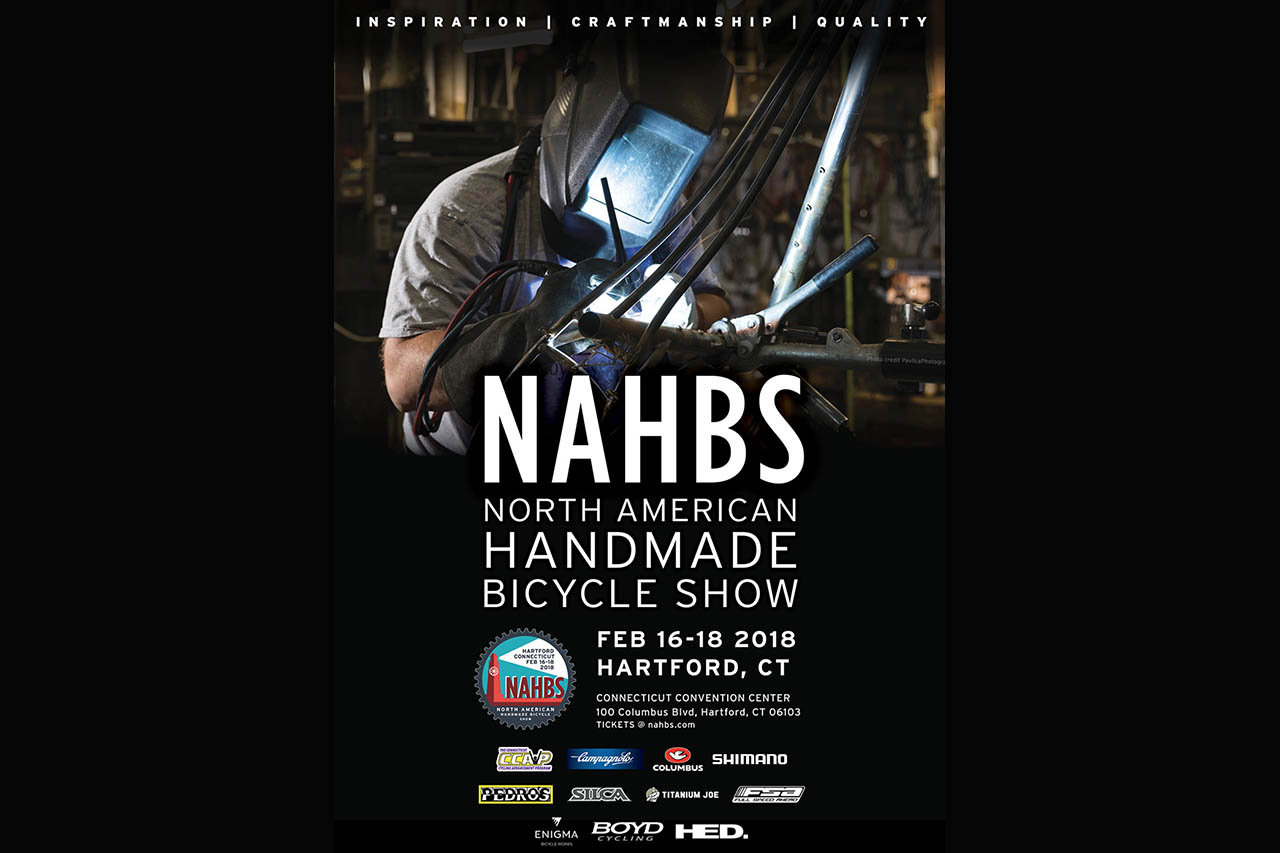 The 2018 edition of the North American Handmade Bicycle Show (NAHBS) kicked off at the Connecticut Convention Center in the capital city of Hartford on Friday, February 16th. It was the first ever visit of the show to New England, traditionally considered the birthplace of the hand crafted, custom-built American bicycle.

Tradition, elegance and dignity are classic New England design characteristics, imbued in everything from stately white chapels to leather shoes and crewneck sweaters. It may have seemed surprising to some, then, that newer trends like fat bikes and custom carbon frames grabbed some of the limelight from longtime, iconic New England builders who have become the establishment names in the U.S. framebuilding culture.

Peter Weigle's bike was narrowly voted into second place at the 2017 Concours de Machines. At NAHBS, bikes like this beauty face a different type of competition. Photo courtesy Peter Weigle.

Whether it was new innovations, familiar designs, or just a feeling in the region that it had been a long time coming, the presence of NAHBS in the cradle of colonial America brought out good crowds on the first day. “I was surprised by how busy the show floor looked all day long,” said our man on the scene, Mark Hallinger, a veteran of many trade shows in the broadcasting industry. “Normally the first day of a trade show sees mostly media and industry insiders in attendance, but there seemed to be a lot of cycling enthusiasts from the general public in here on a Friday afternoon,” he said.

The rise of Korean frame builders in recent years has led to a presence at both NAHBS and Philly. This year Toivo, founded by a team of female and male frame builders, both graduates from the Tokyo College of Design, showed an impressive track bike in the new builder's area.

Emblematic of the mixture of innovation and tradition at this year’s show was a bottom bracket shell from a stainless steel frame project in collaboration with Independent Fabrication displayed by Reynolds Technology, the 119-year old tubing manufacturing firm from Birmingham, UK.

A press release from Reynolds reports that the shell was manufactured by a 3D printing process Reynolds calls Additive Manufacturing, which offers simpler frame fabrication with matching tubesets. The design reduces framebuilder fabrication operations but maintains superior mechanical properties, including high stiffness-to-weight, with custom features for each frame.

3D printing is turning a toehold into a foothold in the handbuilt custom bicycles industry, and Reynolds has emerged as a leader in the development. Photo courtesy Reynolds Technology

Another blend of tradition and innovation was seen in new builder, Corey Lowe of Seattle-based Eyewater Bicycles. After years working as an engineer for larger cycling companies he has set up his own shop, inspired by steel frame construction techniques to miter and fit his carbon tubes together, before wrapping them with carbon piles and bonding them with pressure and heat.

“Steel has romance, and I want to apply some of that romanticized beauty to the carbon world,” says Lowe.

The determination to improve on already great engineering by refining and reproducing excellence, or introducing new materials and processes, as well as the growing talent pool from new geographic markets and age groups, mixed with the entrepreneurial spirit of those entering and surviving in this beautiful yet difficult industry, all of these contribute to the continual amazement of veteran show-goers in the domain of the artisan and crafts guilds.

NAHBS 2018 continues through Sunday, February 18th. Stay tuned to HBG for reports from the show floor on the latest and greatest bicycles and products on display.