Why Philly Bike Expo is so great

The Philly Bike Expo, November 4-5, had a record year as it steadily gains significance in the cycling industry, as well as the cycling community. 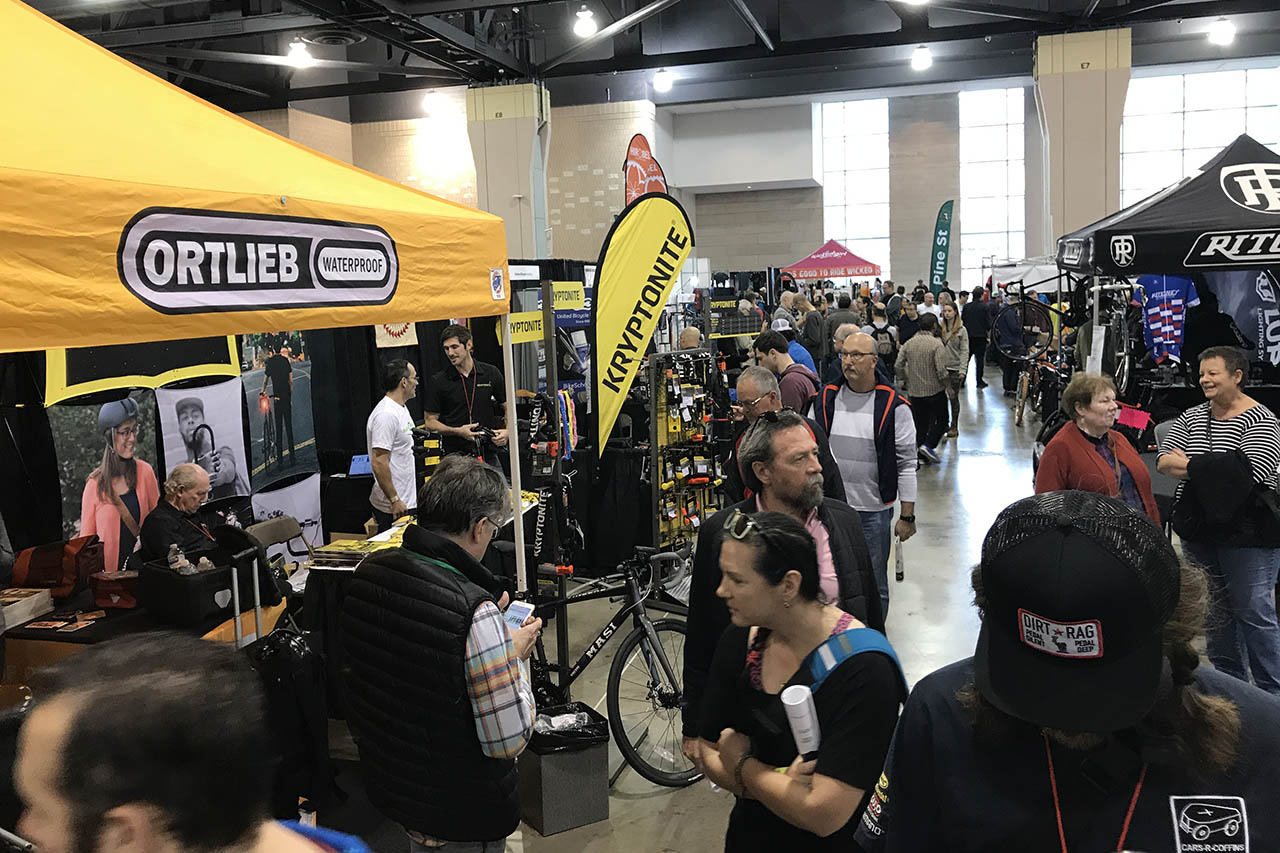 If helping put Philadelphia on the map as a major cycling city was the goal of the Philly Bike Expo's founders, the 2017 edition of the event, it's eighth, must have felt especially satisfying.

The indicators of an event riding a growing wave were everywhere: 177 booths sold across the range of cycling companies, including exhibitors traveling internationally for the event, a record 4213 people bought tickets, a raft of cycling, health and community organizations got involved, there was a vintage bike concours, great libations, instructional sessions on locking your bike properly, bike skills, pinstriping, a wealth of talent in the seminar program, a bike swap ... the event seems to have just about everything, as the photos in our Instagram feed attest.

"People coming into my booth were from as far west as Ohio and Chicago, then all along the eastern seaboard: people are traveling a long way just to attend this show," said Mark Norstad of California's Paragon Machine Works, a company that sells high quality frame building parts.

Dropout array at the Paragon booth

The record number of attendees on Saturday and then again on Sunday included several families who brought their children along. There was a lot for the children to do. ArtBike! ran in the expo hall for the second consecutive year, and a steady flow of children occupied tables there creating bike-themed art throughout the weekend. "What's so exciting to me about this is that kids here are having fun with cycling, they're enjoying their time riding on the kids' course and painting in the ArtBike area. It's not like they're being dragged here by their parents. It's like me as a child, cycling was part of my life and I liked it. So these kids are the next generation of Philly cyclists," said show directory Bina Bilenky.

As it happens, a bicycle wheel makes a half-decent painting easel

With close to 30 frame builders exhibiting, including several of the world's top names, great bikes were in abundance. The People's Choice winner, announced Sunday afternoon, was a disc-braked road bike built by Chris Bishop, with a children's trike by Cycles Ed and an off-roader from Julie Ann Pedalino as runners-up.

Bishop's ornately-painted road bike featured tapered tubes for the main triangle, lugs and fillets, a custom seat mast cap and a mixuture of of tubing brands.

The three-wheel steering trike by Cycles Ed also features a seat post that goes back as it rises to keep a lower gravity center as the owner grows. Photo Brad Quartuccio.

One of the farthest-traveling frame builders at the expo was Jeonghun Lee of Rookey, who is based in Seol, Korea. Lee brought with him a meticulously built and painted bicycle built with Pegorichie tubing, Sachs lugs and Llewellyn dropouts.

Another relatively new frame builder, Lee attracted favorable comments from some senior US builders with his Rookey frame.

Some might wonder what a builder from Korea is doing at a Philadelphia-based bike show. Bina's analysis helps to explain: "When Philly Bike Expo started out, I think a lot of people thought it was a framebuilder show, a smaller version of NAHBS, because it was started by Bilenky, and why would they come all the way to Philadelphia for that? But that was never the vision for this show. Frame builders are an important part of it, but there are other important parts too, and I think in recent years companies have been to the expo or read about it and understood how much broader it is, that it's for everybody who's into cycling, and now we're getting some traction in the cycling industry," she said.

Other big indoor cycling events have some of what Philly has, but not all of it. One might think of it as an indoor, urban version of the Sea Otter Classic (although most of Philly's numerous rides take place outside). And then there's also a big indoor cycling track wrapping around three sides of the expo area.

This indoor track is not to be underestimated. First of all, for a change of mood you can't do better than a quick belt around the smooth concrete surface. The track was heavily used all day on both days, and there is a particular feeling about being on the inside of a big cycling track (the Philly course must be close to 350m in length). It's not at all a bad feeling either. Customers in the coffee line got quite a good view of it, which brings us to the food and coffee. The only other show we've attended that matches Philly for food and beverage is Bespoked. On the culinary front, these two leave the rest far, far behind. At Philly you can have an excellent Americano for $3. "People are surprised because we don't charge expo prices, but we're not into making as much as we can, that's not what we're about," say the guys from Endgrain Coffee. Matching Endgrain's high-street pricing, the in-hall food trucks sell a very decent burrito for $10.

While several of the exhibitors, including frame builders, reported healthy sales at the event, the most frequent terms heard in describing the event were 'just right', 'fun', 'a great mix'. It takes a host community of a certain size and a certain breadth to pull off an event like the Philly Bike Expo, and Philadelphia has sustained the necessary support over the years for the event to ramp up to its current status. It's easy to see it growing bigger, but with the Bilenky family at its core, the theme of Artists, Activists and Alternatives is likely to remain central in the event. There's really only one thing it's missing, and that's a product dear to the hearts of many cyclists: in-hall beer service!