Having been limited in the past six years by venue size, for its seventh edition, September 23, the New England Builders' Ball is moving to a larger venue that it hopes will become a permanent home. 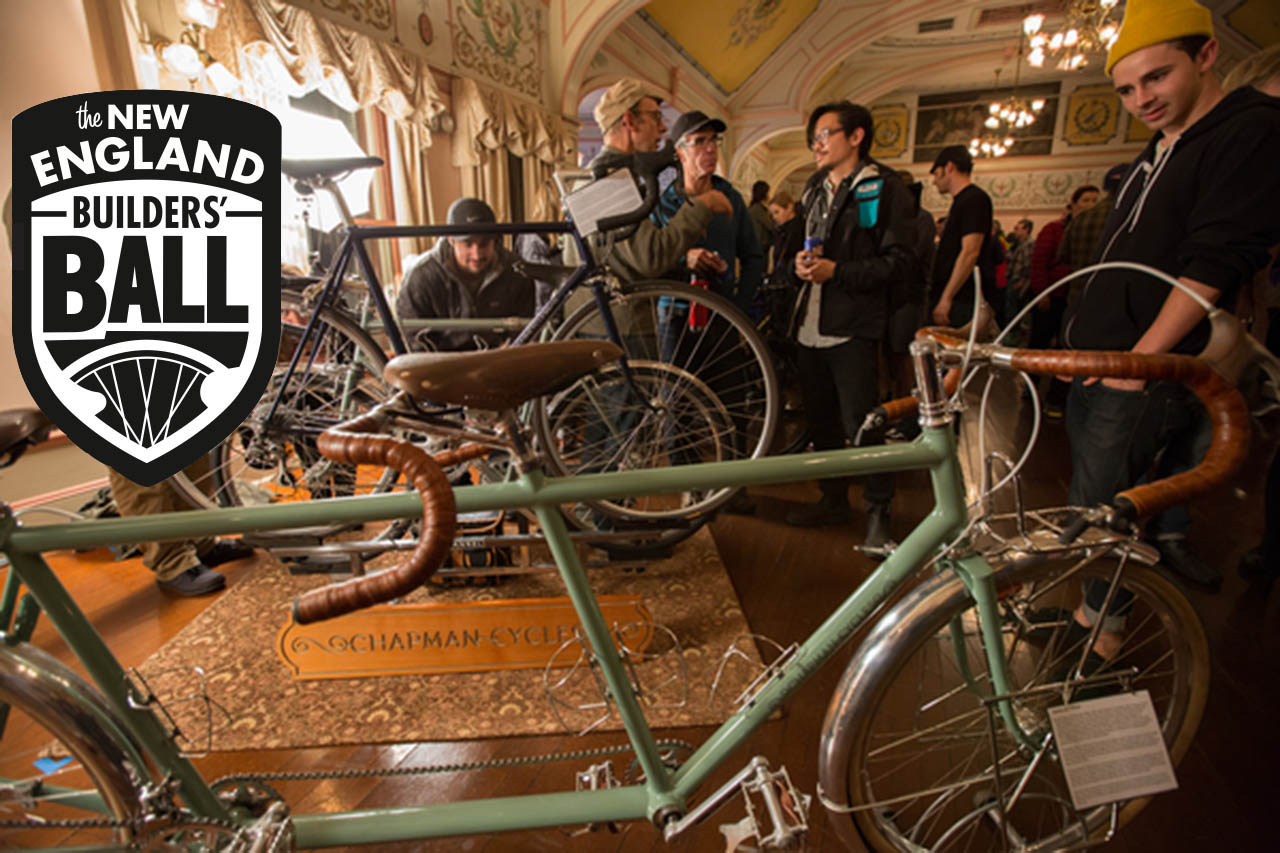 The annual New England Builders’ Ball holds its 2017 event on Saturday, September 23, from 2-10 p.m. With 33 exhibitors, it will be largest Ball yet. "This is the biggest show, in the biggest room, in the biggest city so far," says Eric Weis, the event's founder and current organizer, who owns Cogent Services, a Providence-based consulting firm focused on bicycle infrastructure and events planning. Weis says that in general terms the show has grown each year, but was always limited by the capacity of the venue.

The new venue is the Boston Design Center, in the famous Innovation and Design Building. Weis reckons he couldn't have found a better spot. "It's an enormous building built by the US Army in 1920 for fabricating military-related materials, in what was then the South Boston Army Base. It's now entirely civilian, and called the Seaport District. The building is a third of a mile long and today houses the Boston Design Center and serves as a business incubator. I see it as the bike-friendliest building in Boston. There are at least 300 bike parking spots inside the building, along with fix-it stations for small repairs. Even the external stairs to get up to the first floor from street level have wheel runnels so you can easily bring your bike in. It's hands-down the perfect place for the Builders' Ball," says Weis.

Another major change is the event hours. Prior to this year, the show has always been evening only. Now it's a full day. Weis reasons that it's "better for exhibitors who are coming in from further away: there's less sense in driving a total of 10 or 12 hours for a four-hour show."

Over the years The Ball has hosted a who’s-who of American bicycle framebuilders, from world-renowned such as Richard Sachs, Peter Weigle and Parlee, to the new vanguard including Firefly, Chapman Cycles and 44 Bikes. Exhibitors include framebuilders, makers of bicycle components, accessories, and garments, and artists showing original bike-themed pieces.

One of the new companies exhibiting this year is DaHÄNGER, a New York-based manufacturer of convenient home bicycle storage. This is the enterprise of the 1993 mountain bike downhill world cup winner Jürgen Beneke, a German ex-pat. "I found out about the Builders Ball during last year's KMC Cross Fest and thought it would be a great excuse for us to travel to Boston and hang out with other cycling nuts!" said Beneke. A former carpenter, his booth will be reminsicent of a New York apartment living room with bikes hanging on the walls, "We are right next to the bar, and it will be a nice hangout space where people can relax and see how the DaHÄNGER products work."

Another New Yorker attending for the first time is Johnny Coast, of Brooklyn-based Coast Cycles. "I've been wanting to be part of the Ball for a few years now, and finally pulled the pin,” said Coast, one of five Brooklyn-based builders exhibiting this year. “I'm looking forward to a great party, checking out what my fellow builders are showing, and showing off my latest of course!"

Richard Sachs, one of the deans of framebuilding worldwide, will show there for the fifth time. “I return each year for a few reasons: to show support for my fellow framebuilders, to catch up with old friends, and because the show is always a good time.”

Kristofer Henry, of 44 Bikes, makes a range of mountain and road bikes in Lyndeboro N.H. “New England has a rich cycling history and it’s fitting that the Ball is in Boston this year,” said Kris.  “It’s my 6th year as an exhibitor and I’m just as honored as if it were my first to share space with so many talented builders of the Northeast. It’s a great day to share the gift of cycling, talk bike-speak, and be with friends."

New England has brought much bicycle innovation to North America. Pierre Lallement patented the bicycle while in Connecticut in 1866. Albert Pope started the American bicycle industry with Columbia in Hartford, in 1878. Titanium frames were pioneered by Merlin in Massachusetts (in 1986), and that same year, the world’s first carbon monocoque frames were made by Aegis, in Maine.

Builders in the Northeastern US continue to turn out some of the world’s best and most beautiful bikes, in steel, titanium, aluminum, carbon fiber, and even wood. This year the New England Bikers' Ball features the Copenhagen Wheel. Invented at the Massachussetts Institute of Technology and developed by robotics engineers, this is an intelligent hub with a built-in battery that can be easily added to many standard bicycles. Attendees may register to ride demonstration bikes fitted with this wheel on the streets of Boston’s Seaport district.

Event information and registration is at www.newenglandbuildersball.com.
Admission: $12 adults, $5 youth, free for children 11 and under.