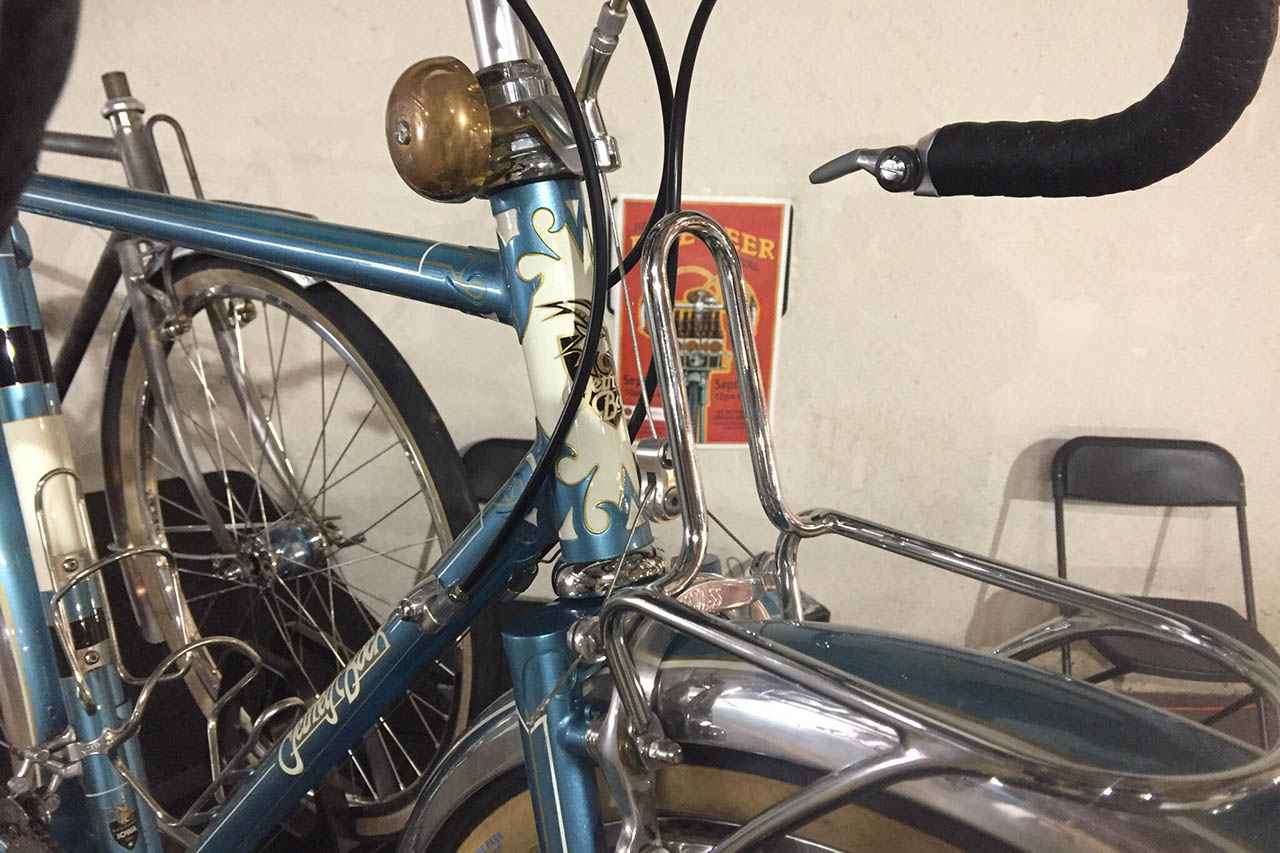 Jeffrey Bock brought out some of his bikes from Ames, IA to share with the Oregon crowd. All photos: John Rezell

The Rhythm Dogs six-piece band jams in the back room to a small audience drinking local craft beer and Oregon wine while a few late-arriving builders apply the finishing touches to their exhibits in the main hall of Cathedral Park Place on the eve of the 10th Oregon Handmade Bicycle Show.

The new Cathedral Park venue is a hit in the Oregon custom bikes community.

Nestled in the old school north Portland neighborhood of St. Johns — embracing a renaissance with artisans of all sorts filling the halls of this sprawling former wool factory built in 1904 — Cathedral Park’s wide-ranging list of tenants from software designers to sculptors mirrors the roster of divergent individuals that make up the loose-knit organization known as the Oregon Frame Builders.

“This venue pretty much captures the show,” says Andy Newlands of Strawberry Bicycles, who was instrumental in forming this nonprofit group in 2007. “It has been around a long time and is taking on a new life. And, it’s the right price for us.”

That is to say it’s free for now, not to mention raw and rustic. It’s perfect for this gathering of kindred spirits who focus on creating custom bicycles more than the bottom line.

“Most of us either have a full-time job in addition to building bikes, or we had one while we got started,” Newlands says.

Andy Newlands (left) of Strawberry Bicycles is one of the founding members of the Oregon Frame Builders and shows off his wares to visitors. Photo by John Rezell

With most exhibitors moved in as the band plays on, the main room resembles an art gallery rather than a typical conference center bike show that stifles the imagination with uniform and confining pipes and drapes. These builders work outside the lines, and showcase their distinctive styles through their displays as much as through their handiwork.

The show has survived hopscotching around Portland’s fringes to various venues in a playful game of hide-and-seek, testing waters in a range of venues from a ship-building yard to the HUB brewery. No matter where it lands, it brings hardcore custom bike fans as well as simple bike enthusiasts flocking through its doors.

The venue roulette isn’t so much an execution of a strategic plan as much as simple economics. While the stunning bicycles, accessories and tools that these bike artists create earn top-dollar returns compared to the mass-produced bicycles that fill most shops, their modest volume brings equally modest results.

“A space this size that’s affordable is very rare in Portland,” says Dave Levy of Ti Cycles Fabrication, who also serves as the organization’s president and is charged with finding 8,000- to 10,000-square feet for this annual reunion of sorts.

“This isn’t a convention center type show because that’s just not the right feel. We try to come up with a venue that’s interesting. Having it more like an art gallery lends itself to the craft, so it tells a story that’s more true to the members of the craft.”

Pre-show at the Circa Cycles booth. Once set-up is completed there's time to wander and chat.

While a steady stream of bike enthusiasts will flow through the main room during the show, this get together on the eve allows the builders to take a peek at each other’s handiwork. While the association binds these builders by their passion, they don’t meet often like the Lions or Rotarians.

“Everyone pretty much does their own thing,” Newlands says, “And this is when we come together.”

They appear to feast off each other’s energy, but more than anything, they understand the internal forces that inspire them to pursue this path.

“What’s cool is that you have an interesting mix of craftsmen coming at this bicycle thing from so many different angles,” says Rich Fox of Circa Cycles, who joined the group about four years ago.

“You have guys like me who are trying to rethink the manufacturing process and what a bike means to people. You have guys who are dedicated to the traditional concepts. Then you have young guys into the traditional style who are testing the boundaries. So it’s a pretty dynamic group, but at the same time a very grounded, inclusive group. Everyone is very welcoming and open.”

Circa uses laser-etched graphics to personalize your bike to reflect your life story.

The show also reflects Portland’s, Oregon’s and the Northwest’s passion for cycling — something the group knew existed, but didn’t realize the magnitude of until they stumbled upon it 10 years ago.

“We had that first show in a very small venue not knowing what to expect,” Newlands says, pointing out it was no larger than the Cathedral’s back room where the band’s horn section wails. “And we had 1,500 people show up. It was just jam packed with people. That’s when we knew we were onto something.”

That something proved to be a fascination with custom bikes and designs, which lives inside more than just the builders. You can see it in the sparkling eyes of the visitors, some who playfully giggle and appear to travel back in time to their childhood as they study the artistic bicycles.

“Once I discovered the existence of custom bikes I found myself constantly thinking about it,” says Jason Henkle of Radian Bicycles, who visited the show numerous times as a fan and is exhibiting for the first time this year. “I couldn’t get it out of my head — my ideas for designs and personal touches — and I just went from there.”

While these craftsmen can explain the process easily, they struggle for words to describe the emotion.

“Making something with your own hands and seeing it through to the finished product is really rewarding,” Henkle says. “Even something as simple as shaping a lug or a chunk of steel into something that is functional and nice looking is really satisfying.”

Chad Smeltzer of Smeltzer Bikes followed much the same path, harboring the desire to build frames for years before making this his first time as an exhibitor. A school teacher by day, Smeltzer made the leap from hobby to business this past year.

“I didn’t know I was coming to the show until Monday,” Smeltzer says, shaking his head in disbelief. “As a spectator I’ve been to this show. I always dreamed of building frames, so I went to UBI five years ago and learned how to weld.

Chad Smeltzer of Smeltzer Bikes cranked out this inviting display in just a couple of days.

“Like most here, I built frames for me and my friends at first, rode them, and started selling some. I took the big leap and bought liability insurance and started a business. I joined the organization on Monday, and they emailed and asked if I wanted to come to the show and I decided to go for it. I didn’t have business cards until yesterday. We’ve been going nonstop since Tuesday trying to gather bikes and build the booth.”

Harold Adkins has been coming down from Richland, WA to enjoy the show for the past three years. It started when he commissioned Mark Hall of Mahall Bikeworks to build a custom gravel bike, Mahall’s specialty.

“Mark asked me if he could show the bike here before he delivered it to me, so I came down,” Adkins says. “Coming down to the show was great. I would have to say that the show is the reason I had a second bike built.”

Mark Hall of Mahall Bikeworks specializes in gravel and cyclocross bikes, but this custom city bike has sleek lines that catches the eye of most passing by.

That second bike is in Mahall’s exhibit this year, showing off an amazing paint job by Black Magic Paint, another exhibitor.

“This is a broad spectrum of interests and very eclectic group of exhibitors,” Adkins says. “There’s a lot of different aspects from bike packing to road riding. And there are specialty people, like Black Magic Paint with their paint, and frame builders with the old technology that are great. It’s just really a fun show.”

Just as varied as the builders, the visitors who roam the floor range from the lycra clad roadies arriving on feather light steeds to hardcore commuters on their everyday bikes.

“It’s bike town USA, whether or not you like the moniker,” says Josh Liberles of HiFi Wheels. “As far as the artisans and craftsmanship, there are a lot of builders here with a large cycling population that supports it.”

By mid-afternoon on Saturday, many of the visitors have filled their complementary pint glass with beer, and stroll around the free-flowing layout pausing to chit-chat with builders as if they just rolled up to a traffic light together and struck up a conversation about their bikes.

The interesting wares range from Tom Campbell’s Celilo Cycles kevlar reinforced wooden frame made of Oregon oak to Ti Cycles’ 3D printed titanium dropouts. Co-Motion shows off its integrated frame-mounted Pinion 12-speed transmission gearbox and Circa the laser etched customized graphics on its top tube. The list goes on and on.

Tom Campbell of Celilo Cycles created a kevlar reinforced wooden frame bike made of Oregon oak for his sustainable product design as a grad student project and turned it into his business. His early bikes were mountain bikes that his son, Caleb, rode at the US Nationals. A family affair, his daughter Martha designed a Chinook Salmon logo for the bikes.

“It’s really laid back and everyone is really friendly to the public,” says Garret Holbrook of Portland, experiencing the show for the first time. “There’s just so much neat stuff to see. Basically, cycling is my one passion, so this is fun.”

While the builders expressed more than a pinch of nervousness the night before the show about yet another venue off the beaten path, a strong showing on Saturday eased concerns as builders and visitors alike shared their affection for all things bicycle.

“It might take a little extra effort for people to get here,” Levy says. “But we do end up with qualified buyers. They are educated consumers. They have the background. They have the interest.”

And the Oregon Frame Builders provide the treasures to share as the custom bike cycle rolls on.