Minnesota's homegrown bicycle show just keeps getting better. Here's an idea of how it was in the Peacock Groove workshop in Minneapolis on June 3rd, at an event that is almost as much about the good times, friendship and the culture as it is the bikes. 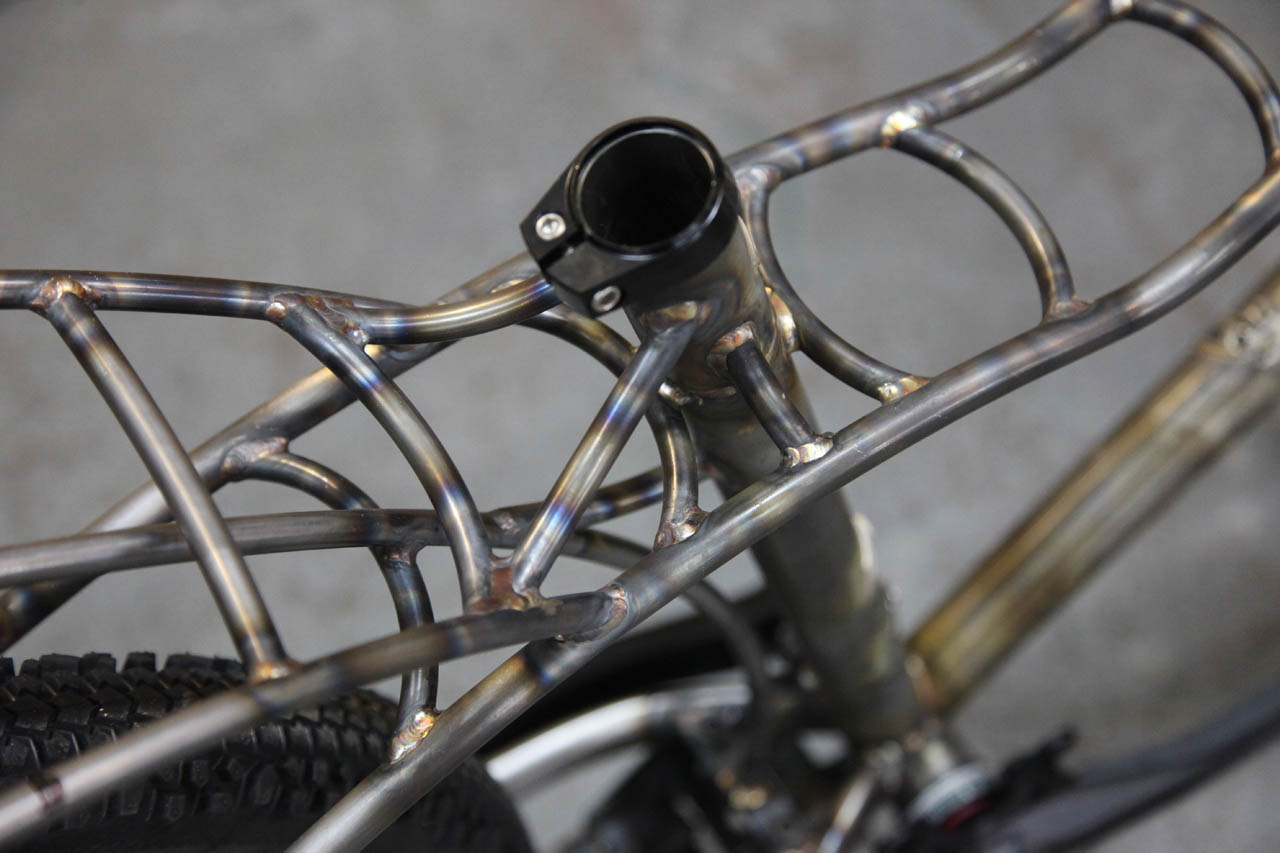 There is a particular feeling you get in a frame builder's workshop. It's not only that the machines and tools you see, and the stacked tubes and boxes of parts will be expertly worked and combined to produce a beautiful rolling bicycle, it's more than all this. That bicycle will be uniquely for you, and the intangible sauce created by the framebuilder's chemistry with you, the customer, in most cases will make it the best bike for the purpose you have yet ridden.

Location, location, location. In some ways Conrad Hilton's formula also applies to bicycle shows. Admittedly, it might be like moving a mountain to transform a 5,000 sq. ft. bicycle workshop into a small expo space, as Erik Noren can attest, but for the attendees it's hard to imagine a better setting for a small regional custom bike show.

Backdrops for handbuilt bicycle shows don't get any more real than this. And yes that's a car in there too.

The first bicycle craze in Minnesota was during the 1880s, and the modern-style safety bicycle design was first made there in 1891 according to the Minnesota Musuem of Cycling, an exhibitor at this year's Minnecycle. This is to say cycling has a lot of history in Minnesota, and not much is new in this industry. Yet in the context of the modern world, Minnecyle presents something different and meaningful. This event, partly by virtue of its location, represents a template for collaboration and community, the sharing of workspace, material resources, promotion and, of course, parties.

Minnecycle in full swing at the Peacock Groove workshop.

The array of bikes and other cycling-related products was quite marvellous considering fewer than 15 exhibitors displayed their products. At some point in the near future HBG will publish a lineage of Minnesota framebuilders, and it is in part due to the traditions of sharing knowledge and supporting other framebuilders in and around the state that the quality of frame building is so high.

Joel Greenblatt of Clockwork Cycles does suprisingly good work for a part-time builder.

Among the most venerated builders in the were Paul Wyganowski, and Chris Kvale. Kvale’s interpretations of old-school Italian building, mixed with the influence of Portland’s renowned Strawberry Cycles, have produced frames of rare distinction.

Wyganowski is Minnesota’s strongest and closest connection with the region's frame building traditions, with a lineage going back to Cecil Behringer, through Terry Osell and Tim Paterek. He seldom ventures outside Minnesota for show events, so this is the only venue where be can be relied on to exhibit.

This tidy mixte frame by Wyganowski is full of distinctive details.

Erik Noren’s fount of creative design is bubbling livelier than ever since his Prince tribute bike, and an elegant transport bike he was building made an absorbing sidelight to the show, even though it was not strictly speaking in the public display area.

An extraordinary frame with elegant lines looks very graceful for its size. Noren reckons there's more of him in this than any other frame he's made.

The show space never felt full, but thanks to a steady stream of visitors throughout the day, who mostly stayed for an hour or two, it was never quiet. 330 were counted through the doors, before the party, and some went there to looking to place an order. At least one attendee was heard saying to his friend that he’d seen a bicycle in the Northern booth on which he’d put a deposit in the coming week. Many others fell in love, and seeds were sewn for future bike purchases.

Northern is the in-house custom brand of the Angry Catfish bike shop. The frame builder is Alex Cook, who formerly worked in the Peacock Groove workshop.

As in previous years some of those that came for the show are back-yard builders, a largely unrecognized branch of the maker family who chop bikes or build them from scratch without any intention to make sales. One such was Minnesota Midtown local Seth Fellows, a tattoo artist by trade who usually makes himself tall bikes to ride around on. He’d heard about Minnecycle from associates who work in bike shops.

“I saw this tall frame and thought I’d make it a short bike, just for a change,” he said of the chopped wheelie-machine on which he’d pedaled to the event. “The next one I do will likely be even more smooshed, and more interchangeable, maybe with three dropouts. Sometimes I like to grind and sometimes I like to do wheelies.”

As Noren says: "If you've got it, bring it." Seth Fellows brought it to Minnecycle.

Noren is starting to sponsor cycling teams. “I give them a super-good deal on the frame, and they make up the balance in putting the word out among the racing community that a custom bike is the best way to go,” he said. Cecily Pèrez, aka The Firebird, showed up on a bike he’d made for her that rather proves his point. At 5’0” it’s nearly impossible to find a mass-produced bike to fit with well 700c wheels.

And while we're talking about style... Cecily Pèrez brougt a boatload too, shown here with her Peacock Groove.

This is not the first year that Minnecycle has spilled out onto the sidewalk, but it was likely the biggest overflow. One of Minnesota’s all-time great bicycle companies, Hed Cycling, turned up to support the event.

Adding to the party, Hed’s Andy Tetmeyer brought along a custom-made boogie box, built into an old travel case, which provided appropriate tunes through the warm afternoon hours.

Leif Hanson, a cycle messenger turned hat maker, had a table featuring a selection from his range of HammerBone Caps.

Get ahead with a hat that's different, right? HammerBone also showed up with style in spades.

As the hot afternoon became the warm evening, a children’s paddling pool was inflated and filled with ice for the after-show beers. While nobody was specifically invited to this stage of the proceeding, equally nobody was excluded... but Noren did request to see some ID in one or two cases. And thus began the wind-down of the fifth running of Minnecycle.

We didn't get a shot of the beer pool, but we have this pic of Nordeastfilms shooting for a sizzle reel. If they sell the idea there'll be a tv series.

As custom builder events go, Minnecycle is well worth attending if you have the opportunity, and probably sooner rather than later because there’s no guarantee it will remain in the Peacock Groove workshop in future years. As to shows like this coming to a city near you, that rather depends on other frame building communities and the people that support them - and there's no harm in reaching out to offer your support. One thing is certain though: regional focus events like Minnecycle make the cycling world a better place.

Focus pieces on individual bikes displayed at Minnecycle will be published during the remainder of 2017.

All photos by Paul Skilbeck