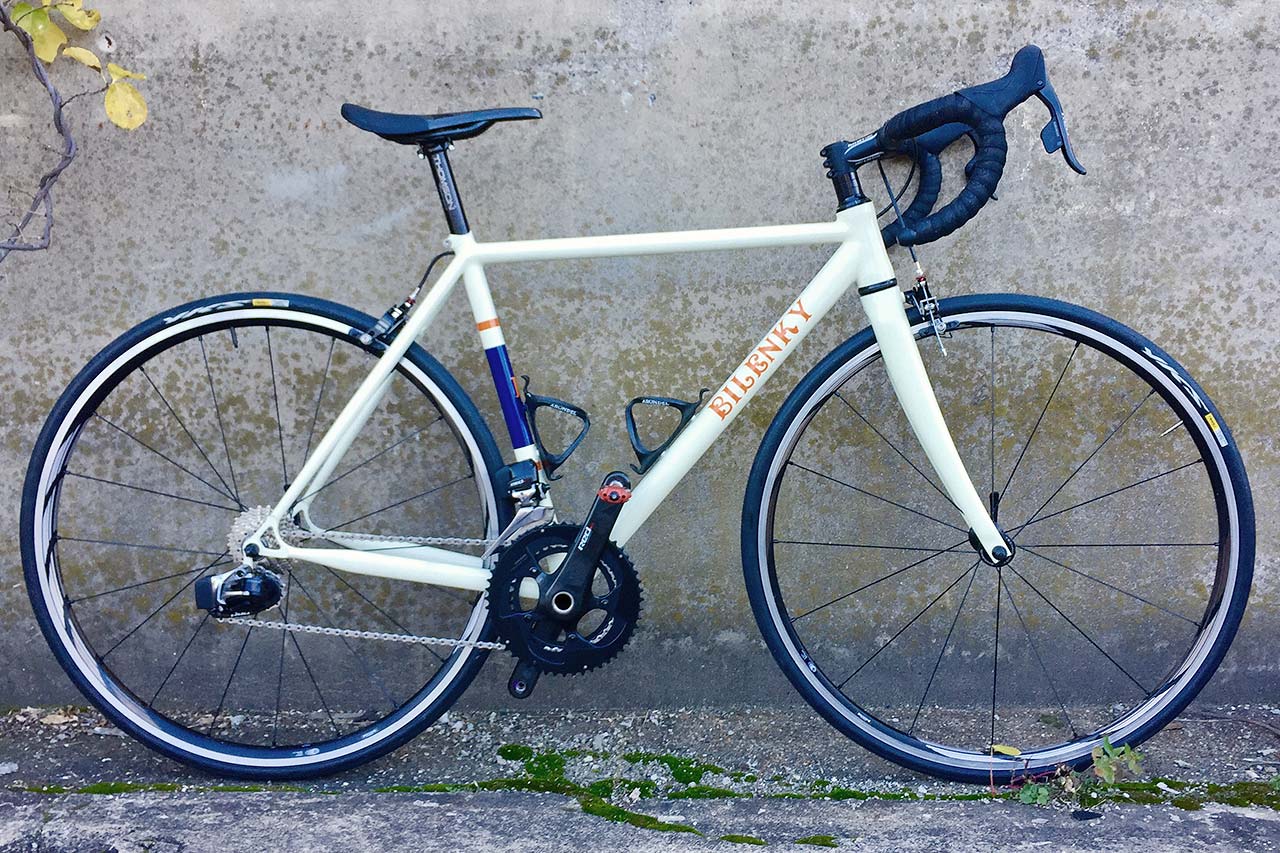 One of the most interesting bikes at the Philly Bike Expo was hidden in plain view on a pedestal in the middle of the booth, which one might think was the prime spot, but somehow - perhaps with its understated finish - this bike escaped the attention of many show goers - which just goes to show: we shouldn’t be judging a bike by its finish.

Stephen Bilenky tells the story: “The customer wanted something over the top, super special, fillet brazed since that’s my specialty. He wanted it to be a carbon-killer road frame. A really responsive, lightweight bike that was just very fast, good for sprinting. It’s going to be good for riding with the guys on really fancy bikes.”

Bilenky describes it as “an artisan-tube bike.” The tubeset is based on the oversize Columbus Spirit. The tubes are bi-oval shaped, which Bilenky purchased partly for the looks and partly for the performance. “Normally I wouldn’t put those tubes on a frame that size, but the customer wants something that’s good for sprinting,” he explains, referring to the feeling of direct response to pedaling input. 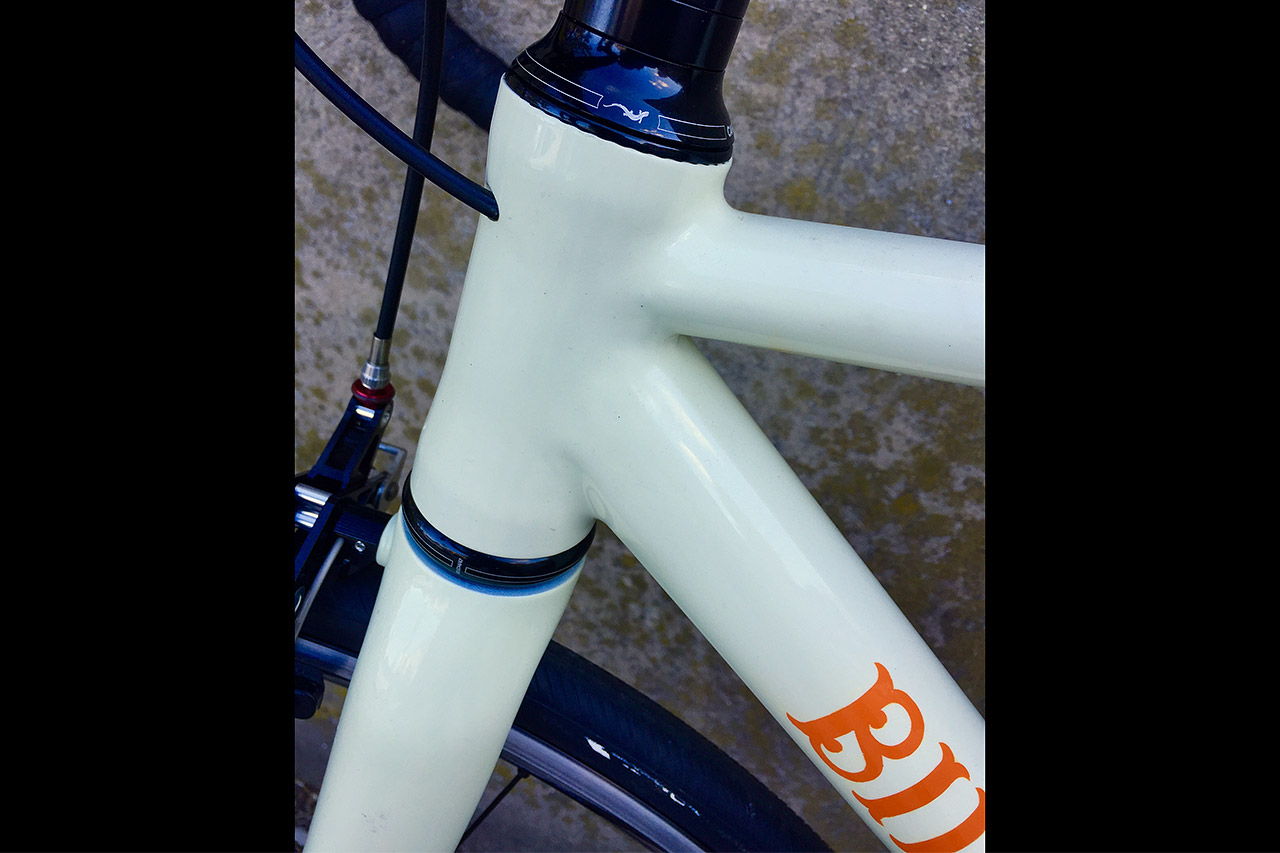 Up at the front is a 44mm steel head tube, which Bilenky custom machined. This tube has an hourglass shape. “I did this partly because of the fork. It’s a German fork, nuts light, around 300g. The bearing sits right on the fork. It’s like something that somebody would put in a high-end carbon bike. I didn’t want to make the head tube skinny on top and fat on bottom, so I made it wide at the top,” he says, but adds, “Because the outside diameter was big, it still wound up being heavy. So we put a lot of radial holes down into the head tube. We didn’t want to make any new features, so instead of adding external features, we did these holes to remove as much material as we could. They’re wider at the top and get narrower deep down. We took out 55g of metal just with the drilling. The customer is a super weight weenie.” The steerer tube is a standard 1 1/8” - 1 1/2”. 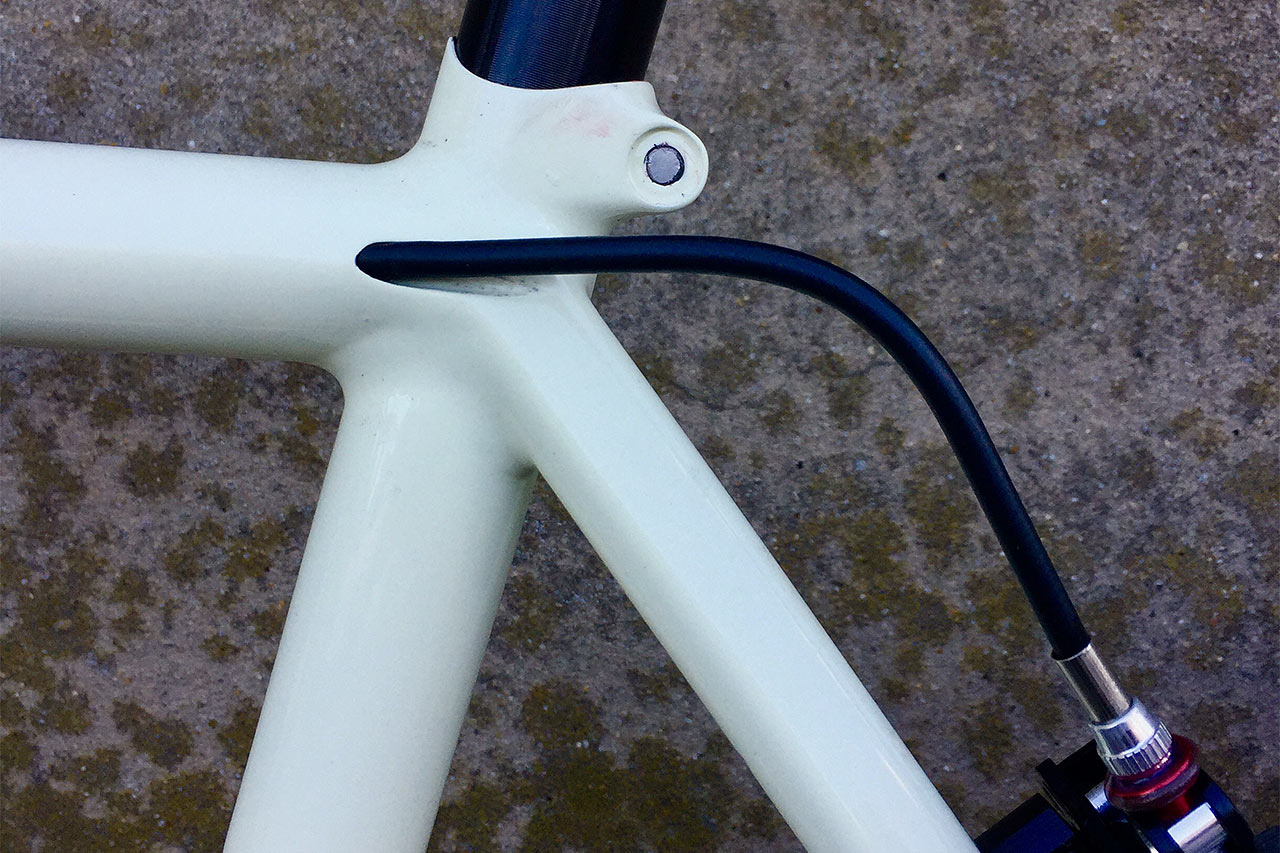 The left side of the bike is where Bilenky exploited his range of options for cable routes. The entry point for the rear brake cable is at the front of the head tube. The large diameter head tube provides enough room for the cable housing to pass the steerer and fit right into the top tube. The cable then exits the frame at the junction of the top tube and seat stay. The ends mimic each other.

“We wanted to make a really clean, minimal, no braze-ons top tube. We used SRAM E-tap. So there are no braze-ons. There are no cables, no braze-ons, it’s a super-clean look. The fork’s wide and so it disappears into the head tube.” 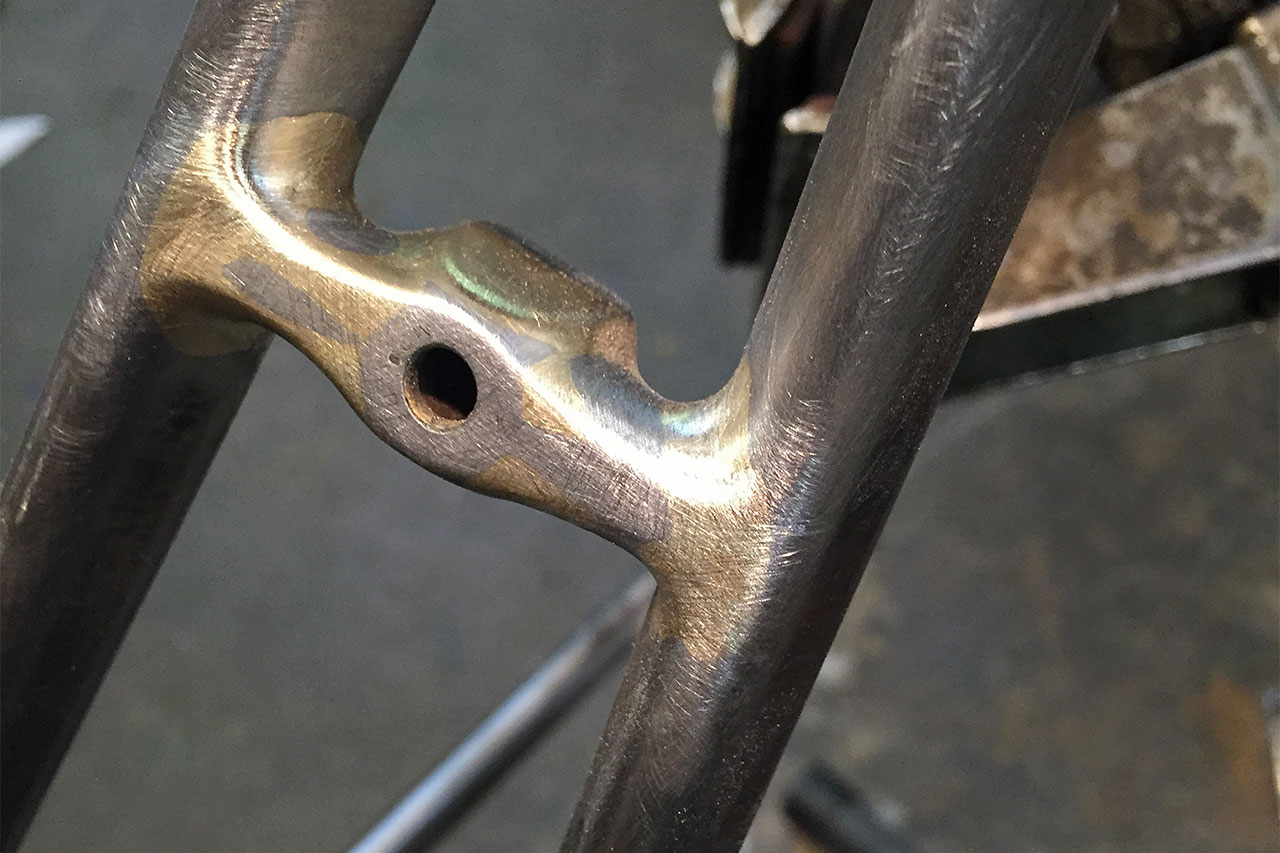 At the rear end is a sculpted brake bridge, the result of yet more Bilenky ingenuity. “I carved it out of this big hunk of stuff. I had a really old bridge. So I brazed on a block that had a counter-bore then carved out a bore. With the aero seat stays, the width of the bridge takes up all of the stays. Maybe it’s like Japanese being minimalist but proportioned and shaped joinery in a bike that’s made for fast recreational riding,” says Bilenky.

As for components, the wheels as shot are borrowed from the neutral services at the Bucks County Classic race. The customer will supply his own wheels. The brakes are a boutique brand and are extremely light. “The lightest caliper brakes you can find,” reckons Bilenky. The handlebar and seatpost are carbon, a low profile Cane Creek 110 headset, and the drivetrain is SRAM Red E-tap.

“It was all pushed by the customer. He liked the rigidity of the oversize steel tubing. Then I made it in a way that I would do. The bike should really jump, you know, accelerate fast. The top tube has not a lot of cross section. It’s going to be a great feeling bike. He wanted a vanilla colour with the letters painted on. The pin-striper will do some things on the fork before it goes to the customer,” said Bilenky. 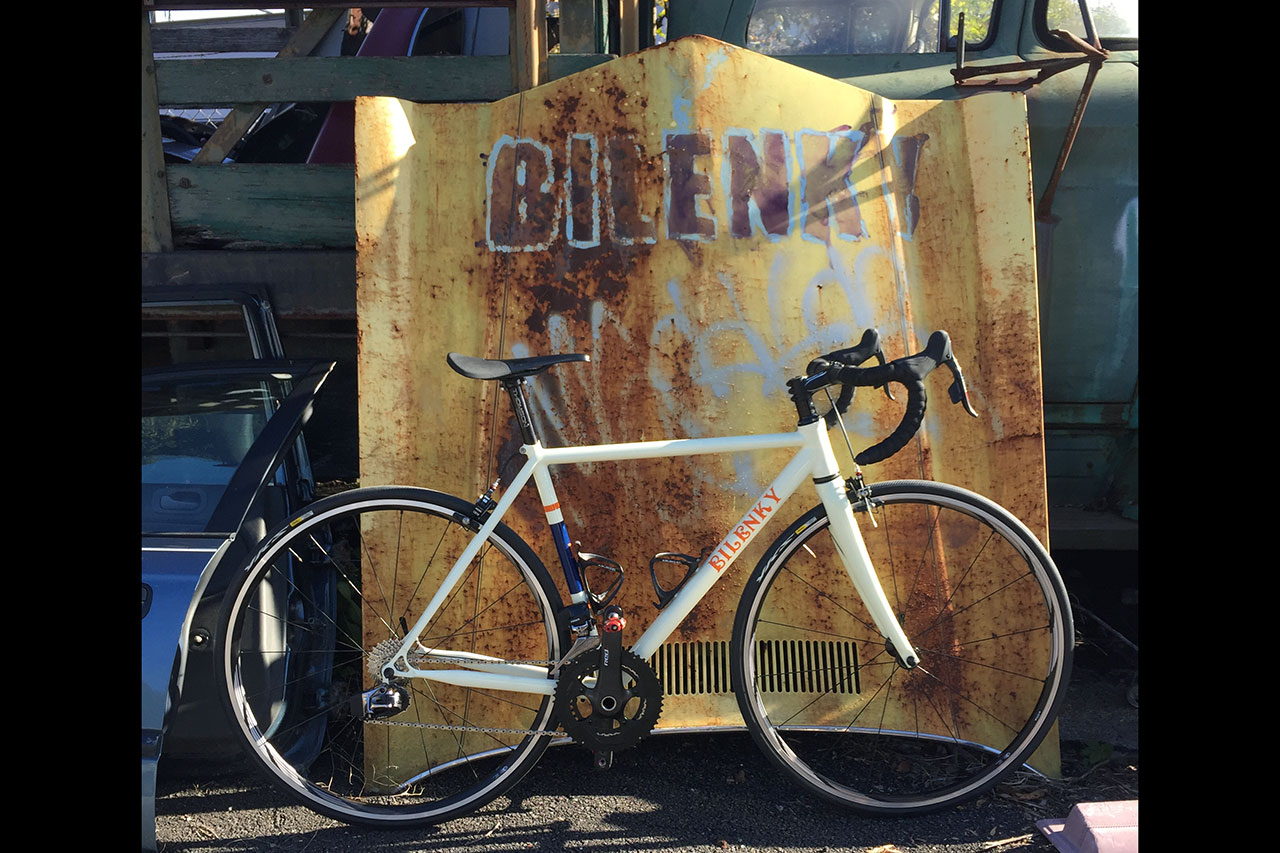 One of the people who stopped and studied the bike was dealer Larry Black of Mt. Airy Bicycles in Maryland. According to Bilenky it didn’t take him long to conclude that the bike is a winner. “He told me it’s a best of show type bike in an understated way.”