Philly Bike Expo founder and local frame building icon Stephen Bilenky collaborated with Josh Boisclair on the Lawng Jawn cargo bike, which was one of the stars of the 2016 PBE. 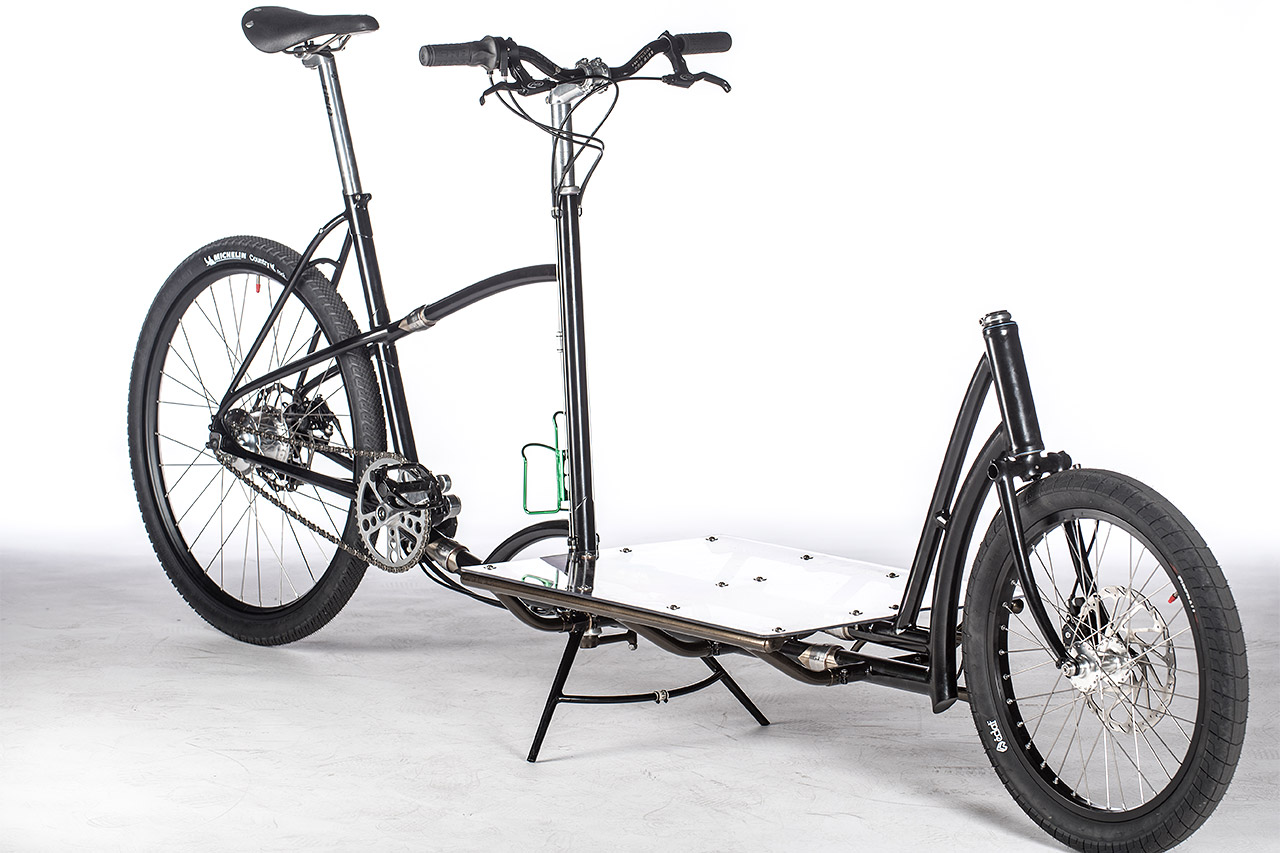 According to the Frieght Bicycle page on Wikipedia, this approximate design originated in Denmark, in the workshop of Smith & Co. (SCO) in 1923, and it was presented to the public at the World Fair in Wembley, UK, in 1924.

Crossing the Atlantic to Philadelphia, USA, we encounter the term "jawn," which is approximates the way John is pronounced, and is unique to the vernacular of the city. The definition of jawn defies easy categorization. It has baffled academic linguists - scholars with PhDs from Center City Philly institution and Ivy League member U-Penn - with its ability to occupy nearly every position of syntax in the local argot. To quote the Atlas Obscura, "it is a completely acceptable statement in Philadelphia to ask someone to remember to bring that jawn to the jawn."

Bilenky Cycle Works is located in Philadelphia, and Stephen Bilenky does a good job of capturing the term's essence. "Jawn means it’s the best thing in Philly slang. Like gimme that jawn. I need that jawn that switches the gears." And so Long Jawn just makes sense for this bike.

Bilenky started his eponymous brand back in 1983 in the basement of his repair shop, and now builds from a North Philadelphia frame shop with a staff of five. Bicycles are a family affair for the Bilenkys - daughter Bina is the Philly Bike Expo Director.

Bilenky builds bikes of every category from steel and titanium, but cargo bikes are something of a Philly institution; at home in a city where parking a car is an expensive and risky affair. "Most of my stuff is not built for shows. It’s for a customer. The customer for this bike said 'I want a cargo bike, one of yours, but different, not off-the-shelf'. He wanted to use it for his dog, and other things, so it’s like a long jawn or as they say in Holland, bakfiets," said Bilenky.

At about this time artist/framebuilder Josh Boisclair was talking about working for Bilenky and this project seemed like a great fit since Boisclair is known as a cargo bike specialist among the U.S. frame builders.

“I’d already made CAD drawings, but Josh had some clear ideas about where he wanted to take this project and it made sense to give him pretty much free rein,” said Bilenky, and adds, “I have an aesthetic sense, but there’s an artistic appeal in Josh’s work that starts from his hand-drawn full-scale renderings of the bikes he’s working on and goes all the way through to the finished product.” 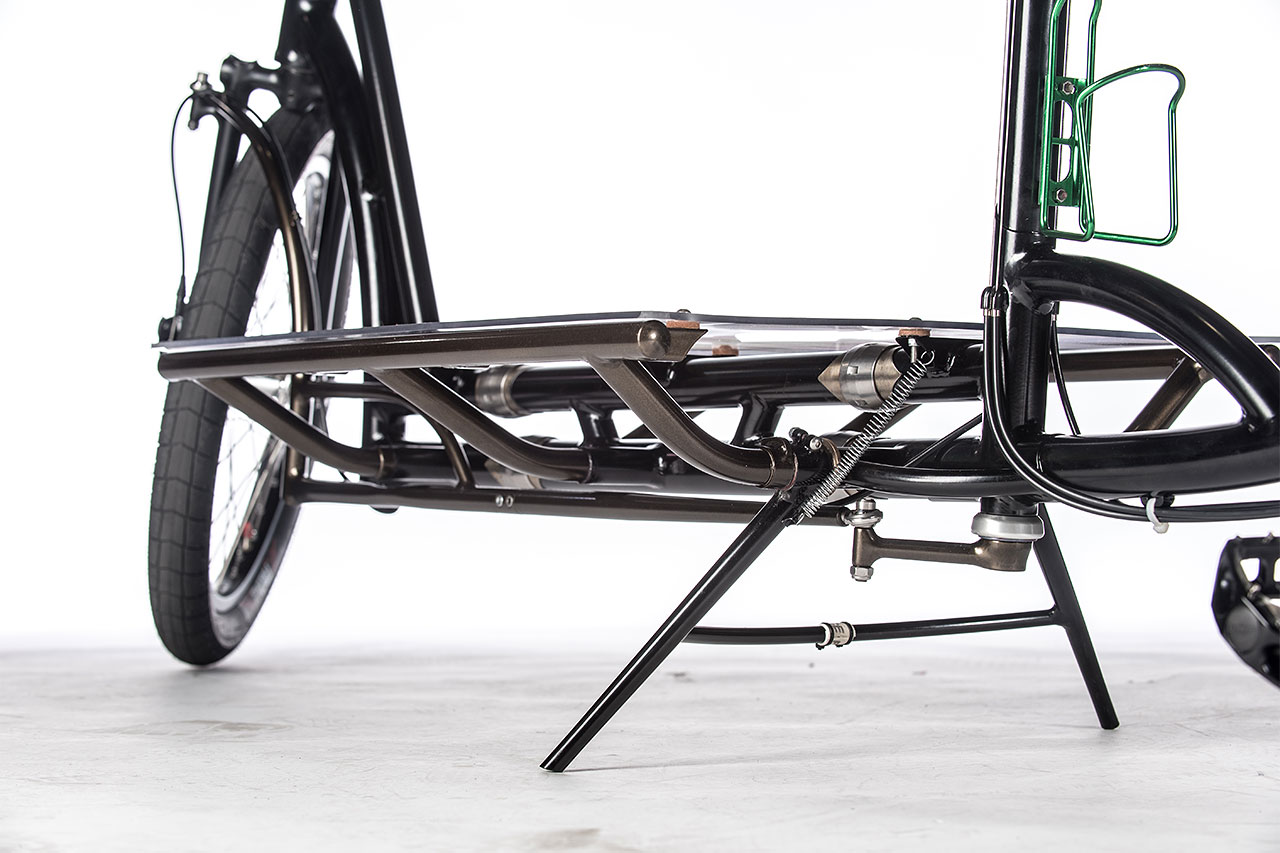 Boisclair takes up the story: “The design of this bike began from a rather challenging and interesting customer request: ‘Make a bike on the same or higher performance level as the Harry vs. Larry Bullitt, AND, it needs to fit into non-oversized airline luggage.’” Boisclair says, adding, “I was instantly intrigued and began sketching up ideas with the intention of making the bike look "Bilenky". As far as I know a bike like this had and has still, never been done before. The obvious hardware choices were disk brakes, Rohloff speed hub and S&S couplers, combined with Paragon Machine Works dropouts, headtube, and tube splitter in the steering rod. Making the bike both laterally rigid, vertically compliant, lightweight, able to comfortably fit a range of rider heights, have a "standard" cargo capacity, and fit into two suitcases was the ultimate goal, as well as avoiding bump-steer due to the decision to use a single-sided steering arm. It was quite a design challenge to say the least.

The heart of the Lawng Jawn. Photo: Josh Boisclair

The result looks like it could become a classic. The appearance is timeless, as if it perhaps came out of the 1930's, but at the same time is not quite like anything yet seen

Boisclair talks us through the design influences. “The front end instantly reminds one of the classic loop-frame roadsters of the Netherlands and Great Britain. The cargo area is full of "mechanicalness," as the late great Indian Larry would say; the cockpit has subtle references to the early Maxwell Bakfietsen; and the back end is full-on modern French: chock-full of artistic flair.

As for the rides qualities, which in cargo bikes vary across a very broad spectrum, “One of the test riders at the Philly Expo described the ride as “dreamy” and personally I was very satisfied with the finished product," said Boisclair. "It’s rigid where it should be, compliant where it should be, accelerates without fuss, stops precisely, corners predictably, and of course draws all sorts of attention from the car drivers!”

Bilenky too sings the bike’s praises. "I’ve ridden it. Just super solid. If you get on some of these other [cargo bikes], those things can be really loosey-goosey. This thing’s super solid. It doesn’t have any of that flex and wobble."

It's tempting to call the Lawng Jawn a utility bike, but as with anything Bilenky creates, there are ample touches of artistry as well. He cites a steampunk influence with the bronze touches and semi-gloss black paint that remind one of a locomotive's finish - perhaps not surprising in a city that once served as the headquarters for the massive Pennsylvania Railroad. 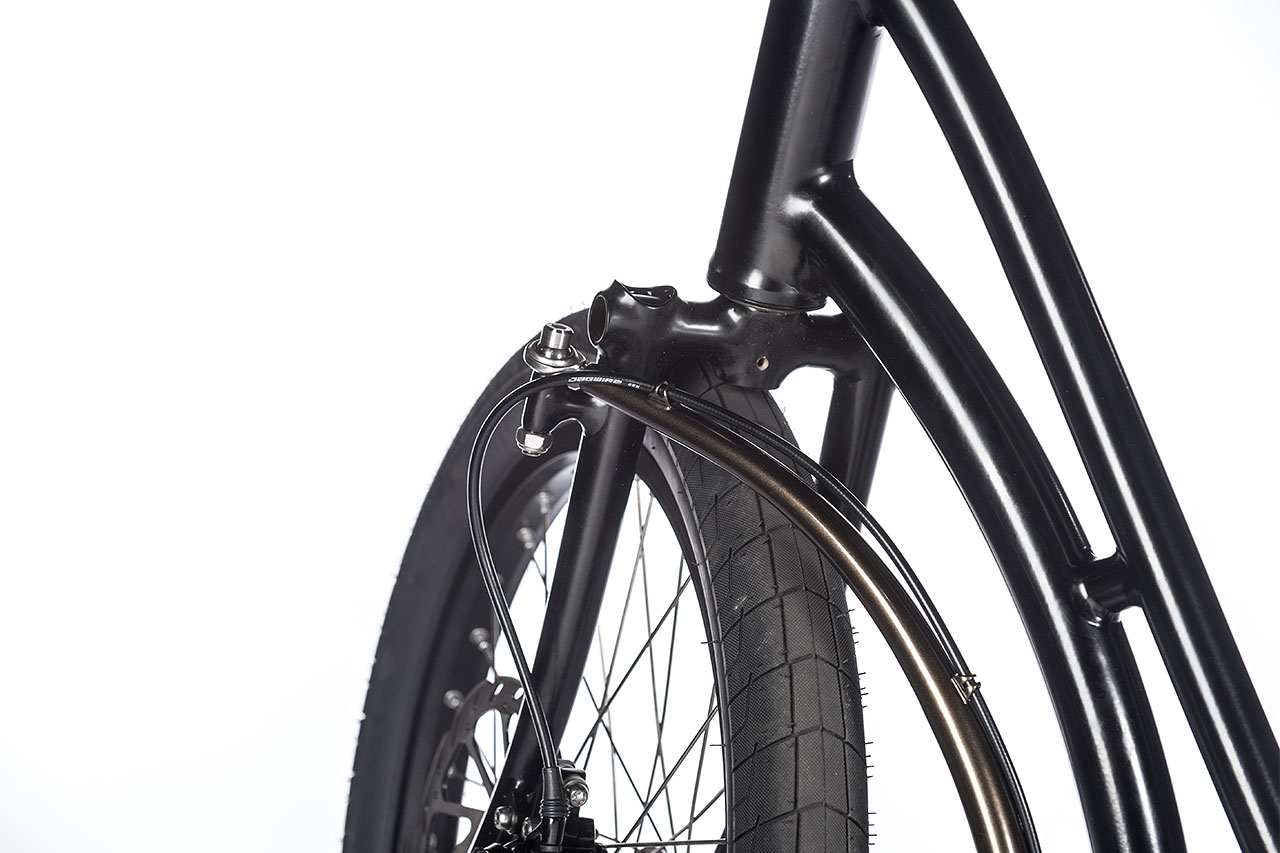 This was not a fast build. After all the design work, tube cutting, tube bending, and mitering, more than 50 joints were fillet brazed. It took near 400 hours from Boisclair alone, not counting Bilenky’s input.

Bilenky frames the Lawng Jawn project in a global perspective. “The Bullitt is a super-successful bike because it’s lightweight and fast for a cargo bike, and being mass produced in Taiwan it’s less expensive. We’re all for that, because ultimately cargo bikes are good for people and cities and they show us there’s still some hope for the future of transport in cities. We just wanted to show that cargo bike design doesn’t end with the Bullitt.”

While some who have ridden the Bullitt report that it's steering takes some getting used to, all first-ride reports we've had from the Lawng Jawn are of a smooth and predictable ride. By no means is it the only Lawng John bike that rides well, but few out there will board an aircraft so easily. With jawns like this, now there’s even more hope for the future.

This article was updated in September, then October, 2017, first to include a little about the history of the Long John, and then to more fully describe the production of the Lawng Jawn.