In Part Two of our series on the French randonneur/touring bike event Concours de Machines, we announce the 2016 winners and take an in-depth look at Cycles Victoire's winning bike. 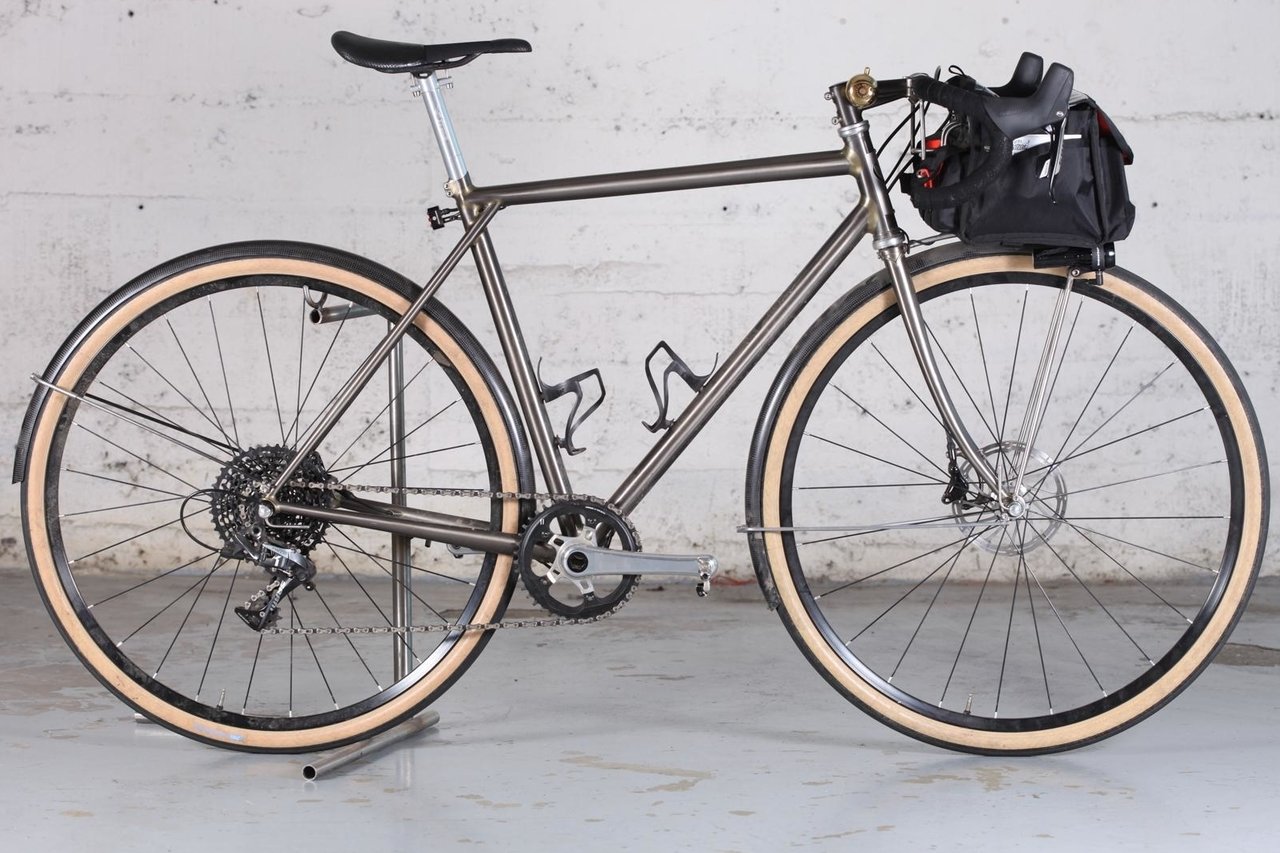 The 2016 Concours de Machines (“Technical Trials”) took place July 1-3 in the Auvergne region of south central France, famous for its mountainous terrain and dormant volcanoes. The tallest of these is the 1,465 m (4,806 ft.) Puy-de-Dôme, known in cycling circles as a legendary climb and summit finish in the Tour de France, last used in 1988. The town of Ambert, on the Dore River, was the venue for this year’s event.

The 2016 event was the first held since 1949. In the 67 years since its last appearance, much has changed about the bicycle, but the goals of the event remained the same: to award the lightest, fastest and most durable randonneuse bicycles as produced by custom and handbuilt manufacturers, most of them French.

In fact, 2016 was an all-French affair, with 20 home builders entered in the competition (19 bikes eventually made it to the event):

As France is without its own native bike expo like Bespoked UK, NAHBS, or the Berlin Farradschau, the CdM sought to fill this role in its own, unique way. None of the other shows include on-the-road tests as a part of the competition for industry honors and awards. These trials, over three days and 360 km of roads and paths were run in collaboration with the local Sportive Les Copains. In this participatory manner, the bicycles of French craftsman builders were brought before the public. 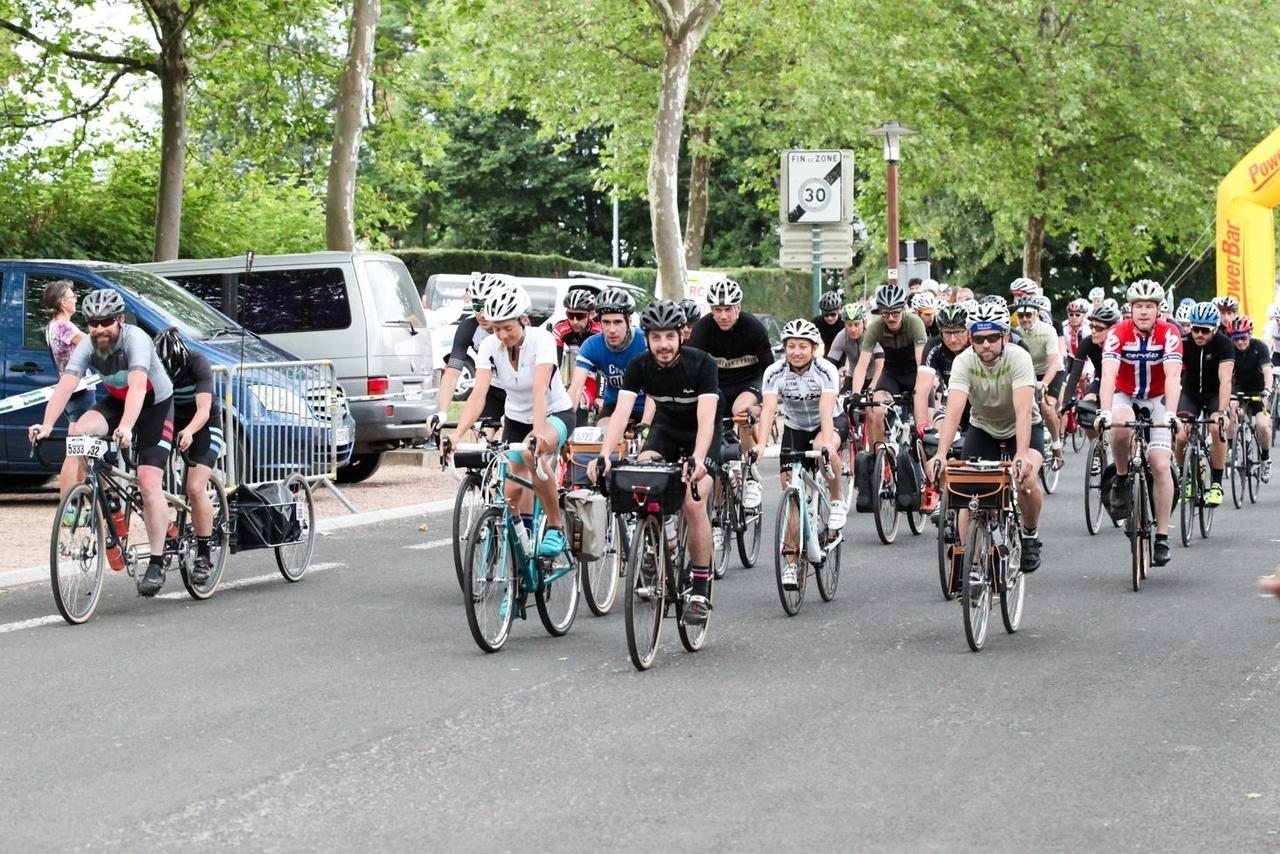 All bikes entered in the competition were a part of the road trials.    All photos courtesy Cycles Victoire

The public also had a chance to inspect, evaluate and vote for their favorite bikes, along with a panel of international experts that included the highly regarded Jan Heine of Bicycle Quarterly magazine. The bikes were judged by criteria that included the degree of innovation, the technical quality, the reliability, the proportion of French or European parts, and also the weight of the machine and the average speed of the rider all along the road trials. 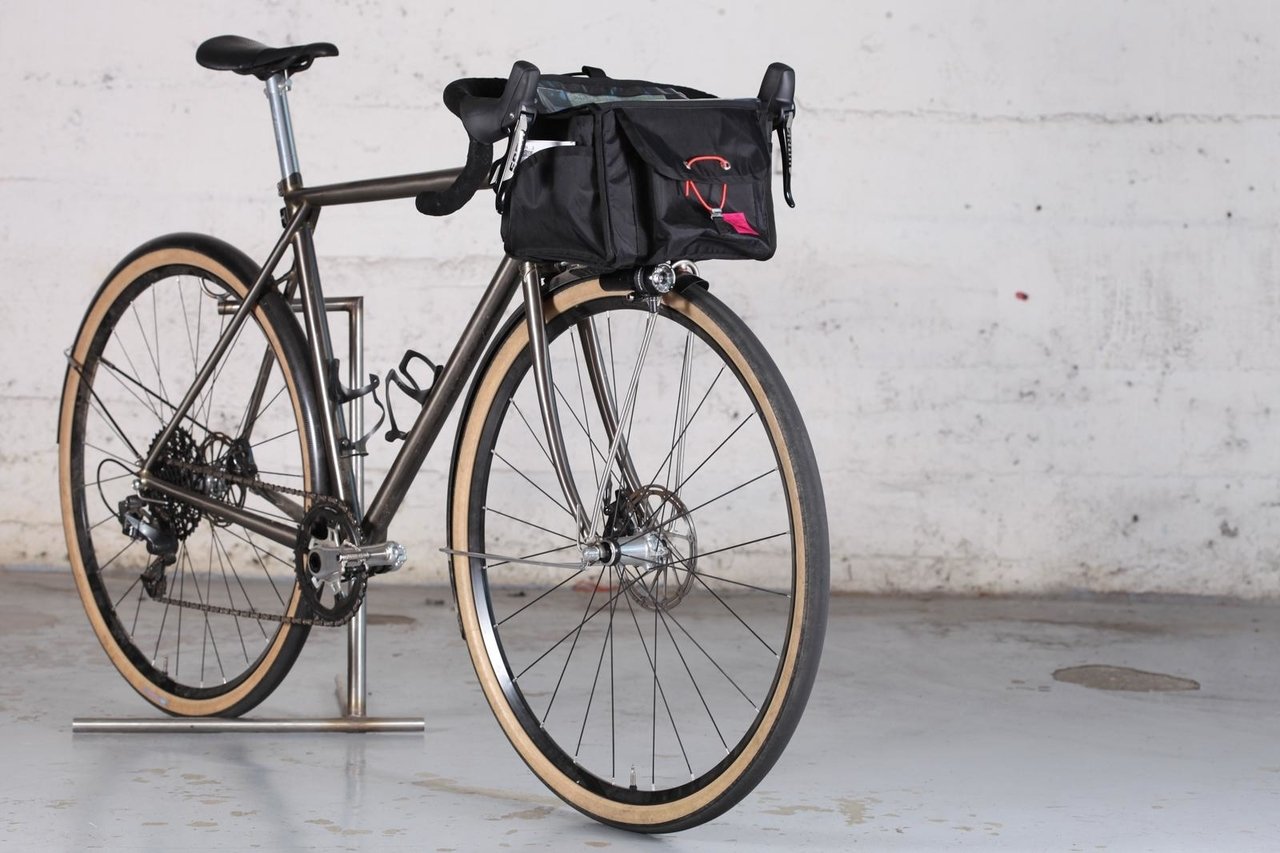 For 2016, the overall winner was Cycles Victoire. The organizers called their entry 'a light machine with a timeless style and modern technologies'. Second place went to MILC-Goblin Bikes’ innovative entry, third place to PechTregon Cycles, and a special judges award as well as the Public Award went to Julie Racing Design’s tandem. Sébastien Klein won the Rookie Award. 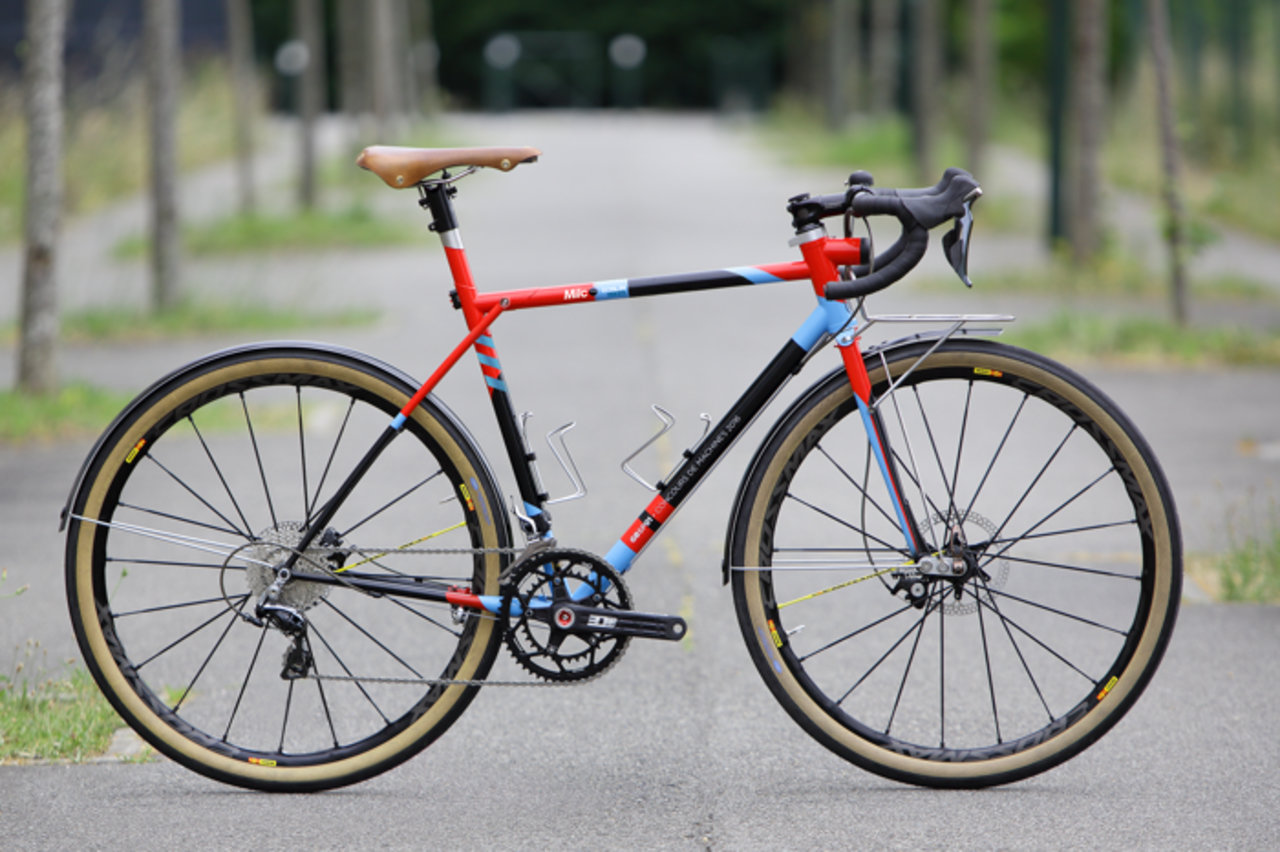 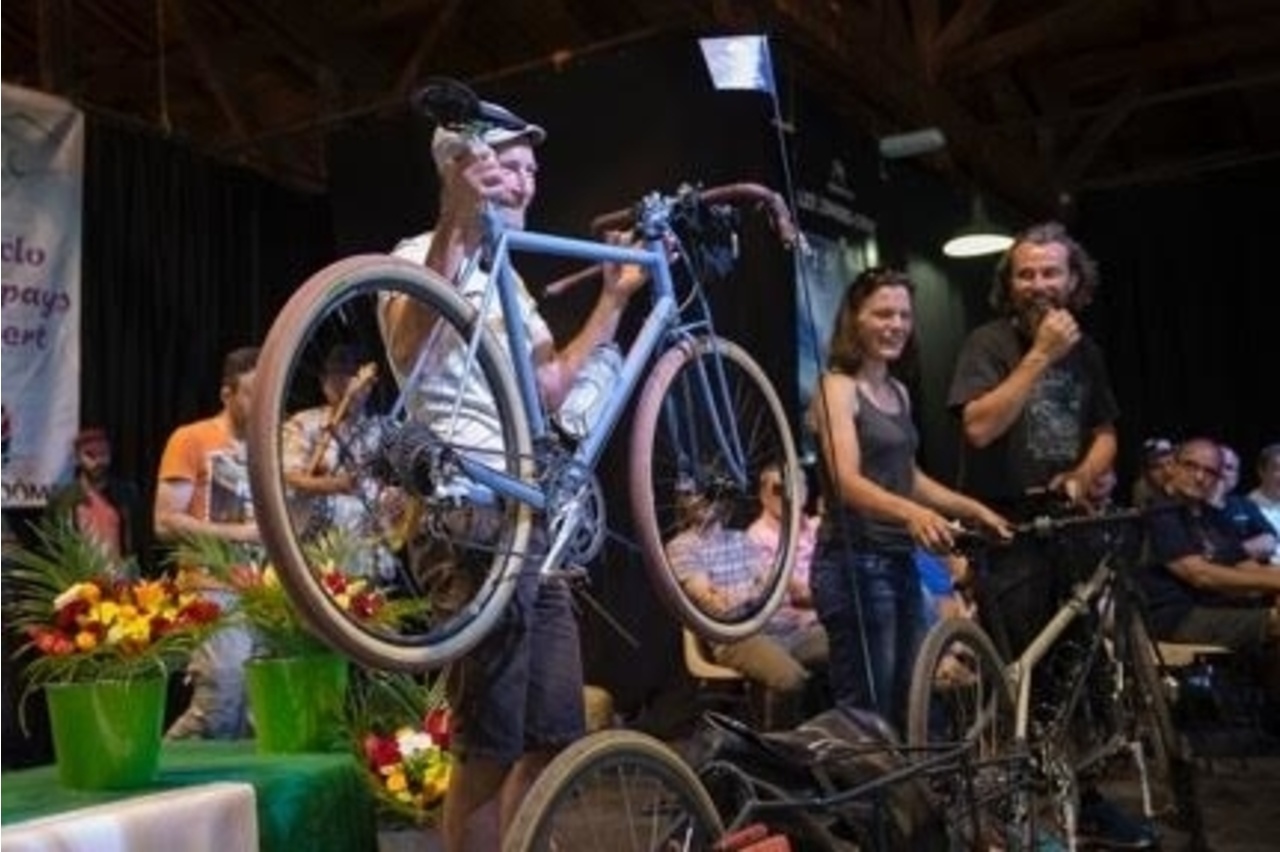 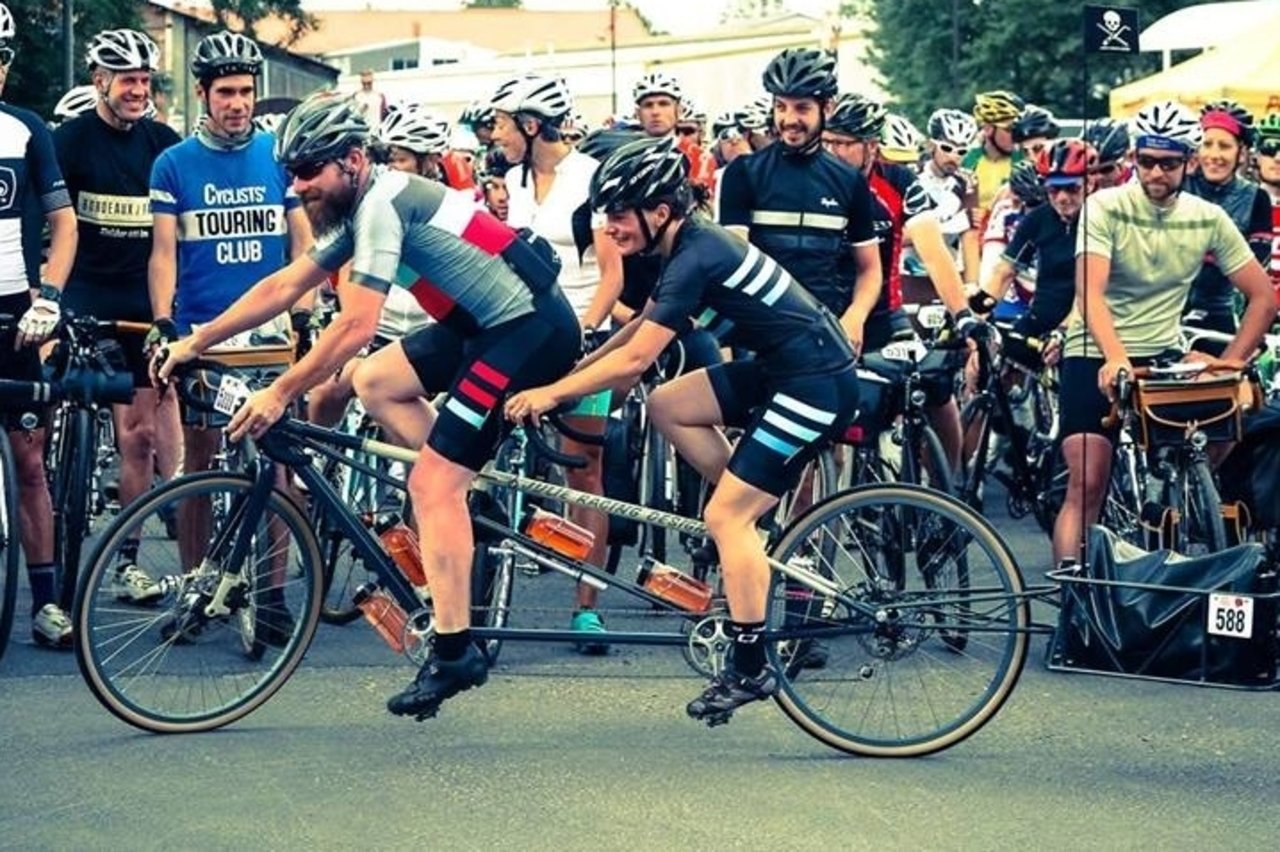 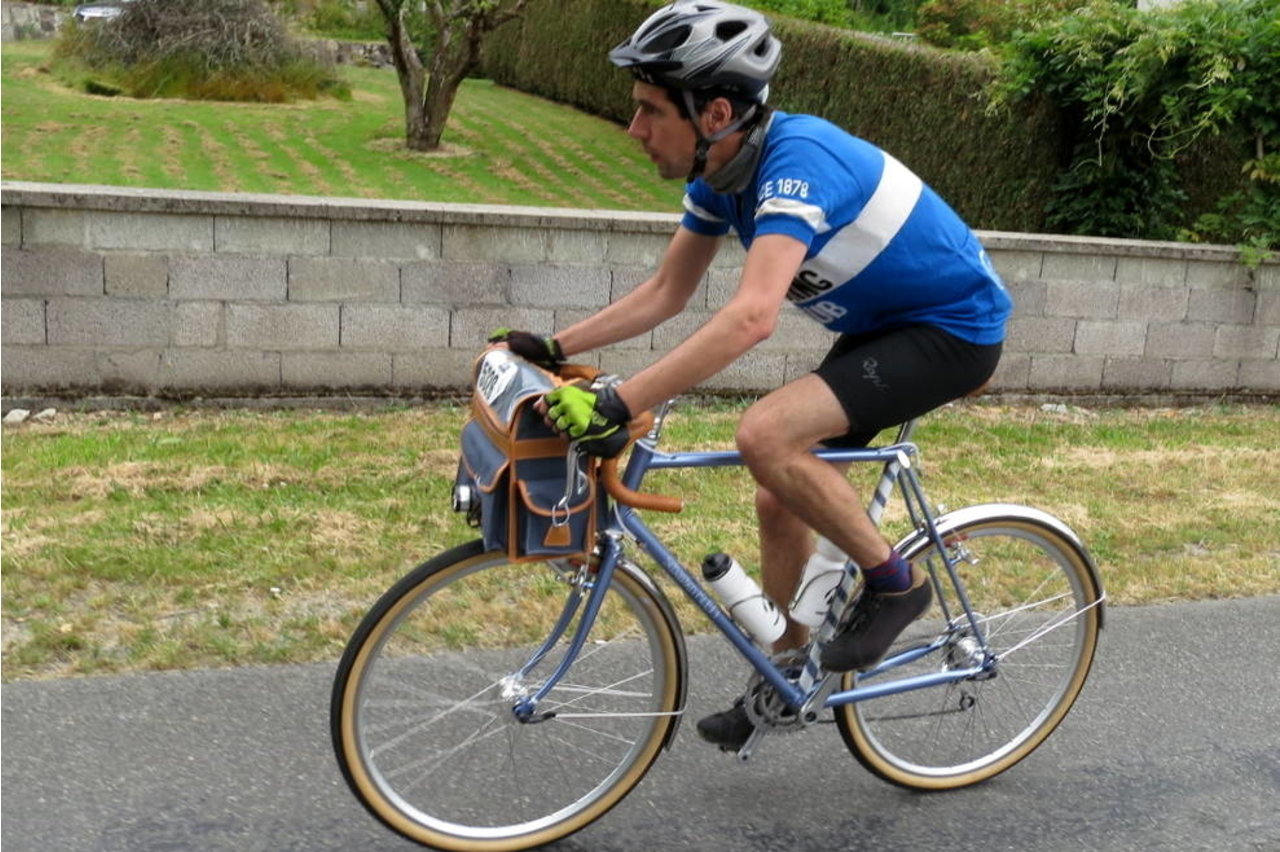 Matthieu Perrusset was Cycles Victoire’s rider for the event, and he told us about the bike he helped pilot to victory. He finished 8th, 5th and 3rd in the three stages, but the other factors (weight, durability and component design and construction), plus second place to Julie Racing Design in the popular vote - which accounted for 50% of the score points - all added up to victory for the French craft builders.

Perrusset’s randonneuse was built with Reynolds 953 stainless steel tubing for the main frame tubes, plus a special, custom 921 blend for the fork blades. “They have a special bend and a bigger diameter than the standard ones to support disc braking,” said Perrusset.

The crew at Cycles Victoire believe that the wheels are a close second to the frame in determining the overall ride, and success, of a bicycle, and for this critical element they worked with German manufacturer Tune to source the hubs (the Prince/Princess Skyline straight hubs), Belgian company Sapin for the spokes, and American company Stan’s No Tubes for the 700c tubeless rims designed for cyclocross use. The hand-laced and built wheels were shod with the popular Compass Bon Jon Pass tires in 35mm width and extralight version, which saved them 100g on the pair. Small details like these, when a contestant has to navigate a compromise between weight and durability, add up in a competition like the CdM. 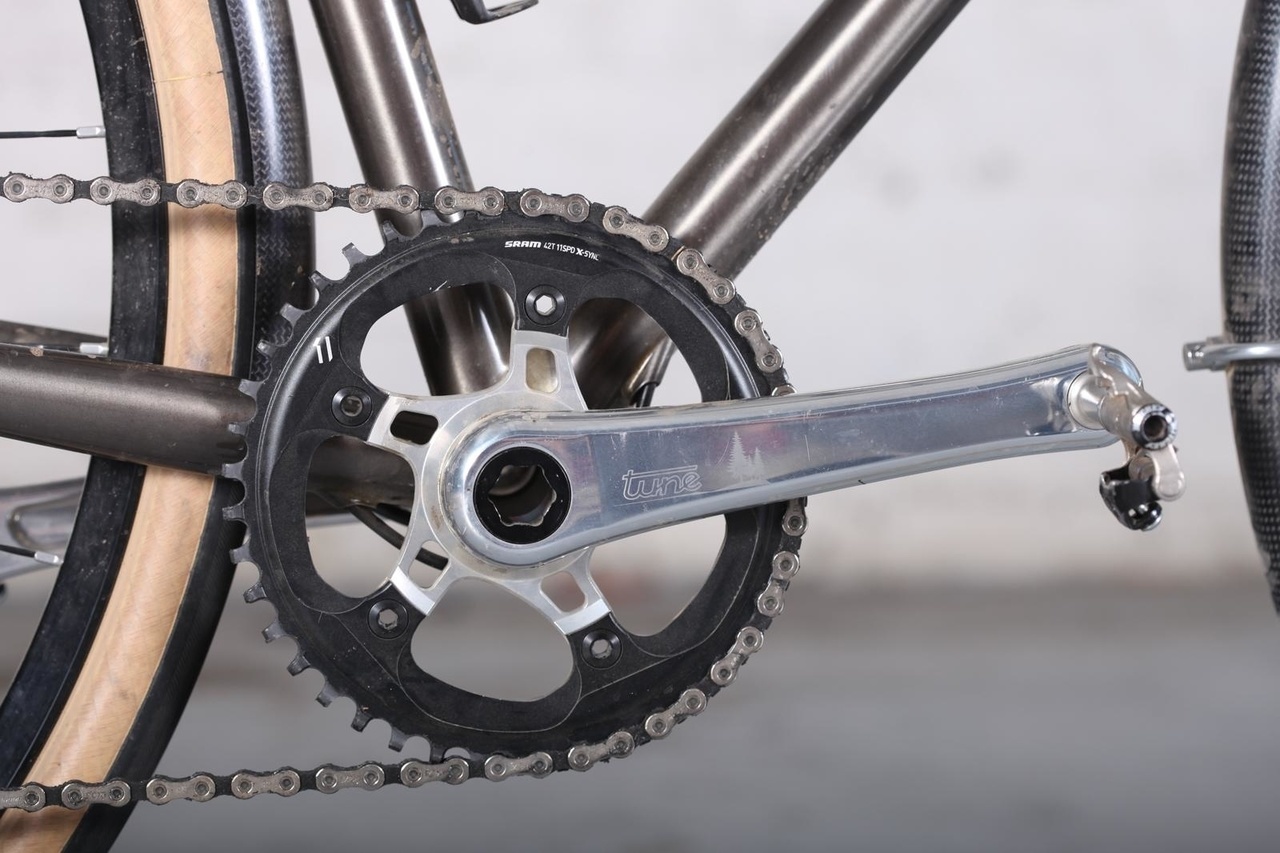 German manufacturer Tune supplied many of the components on Perrusset's bike, including the crankset.

Component manufacturer SRAM provided the 1x11 drivetrain for the bike. The 10-42 11-speed cassette, combined with a 42-tooth front chainring, gave Perrusset a range of gears very similar to a compact 50/34 double with an 11-32 rear cassette. Foregoing the front derailleur provides an advantage in weight, reliability, and simplicity that proved to be crucial on the roads and paths of the Auvergne. Tune again provided the Smartfoot model crankset, and a SRAM Force rear derailleur and Rival levers completed the simple and durable set-up. 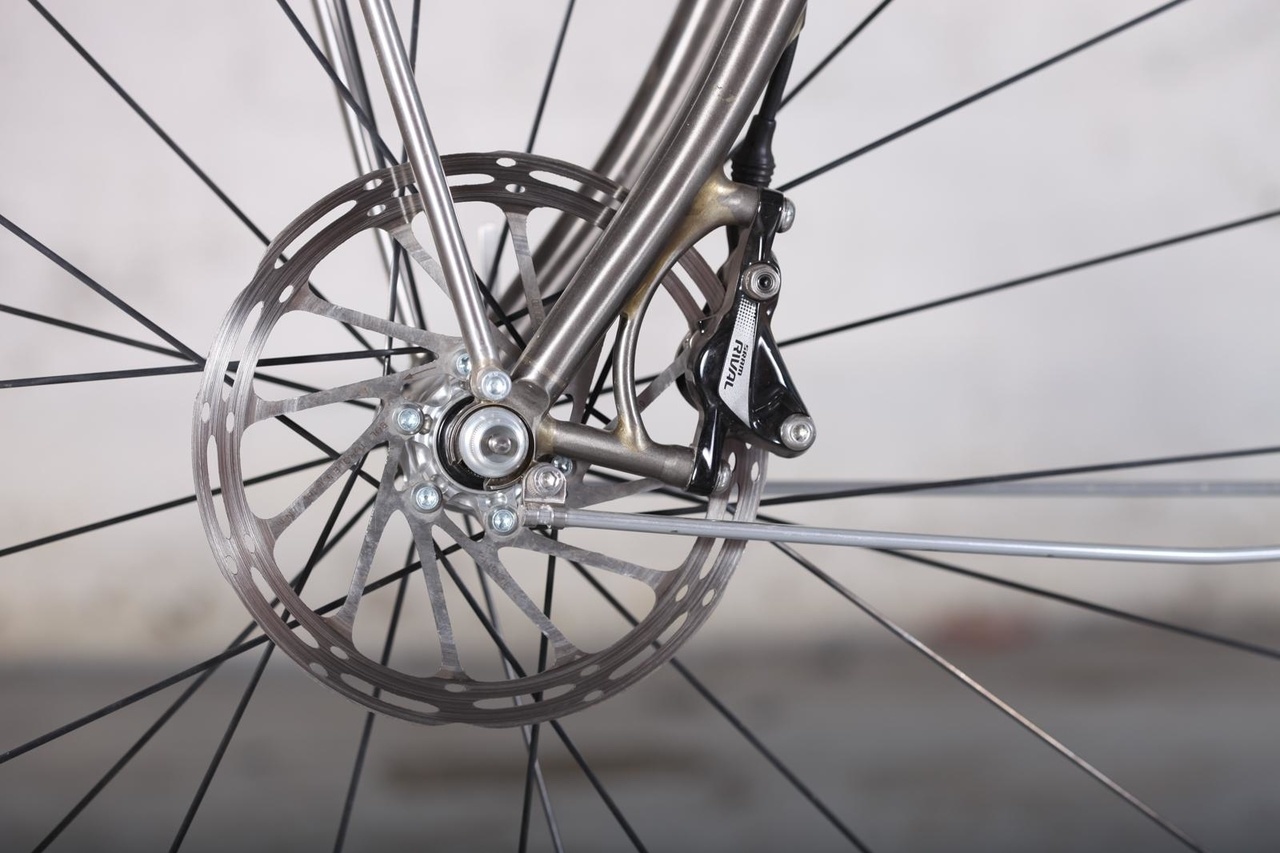 Disc brakes are at the center of a controversy in the road racing scene, where they have been slow to be accepted in the pro peloton, largely over safety concerns in the event of a group pileup. Randonneurs and gravel sportive riders don’t share the same concerns, and disc brakes’ greater stopping power and reliability are assets when descending a tricky gravel descent. So it was not surprising to see that Cycles Victoire equipped their entry with disc brakes from SRAM, the Rival hydraulic models. 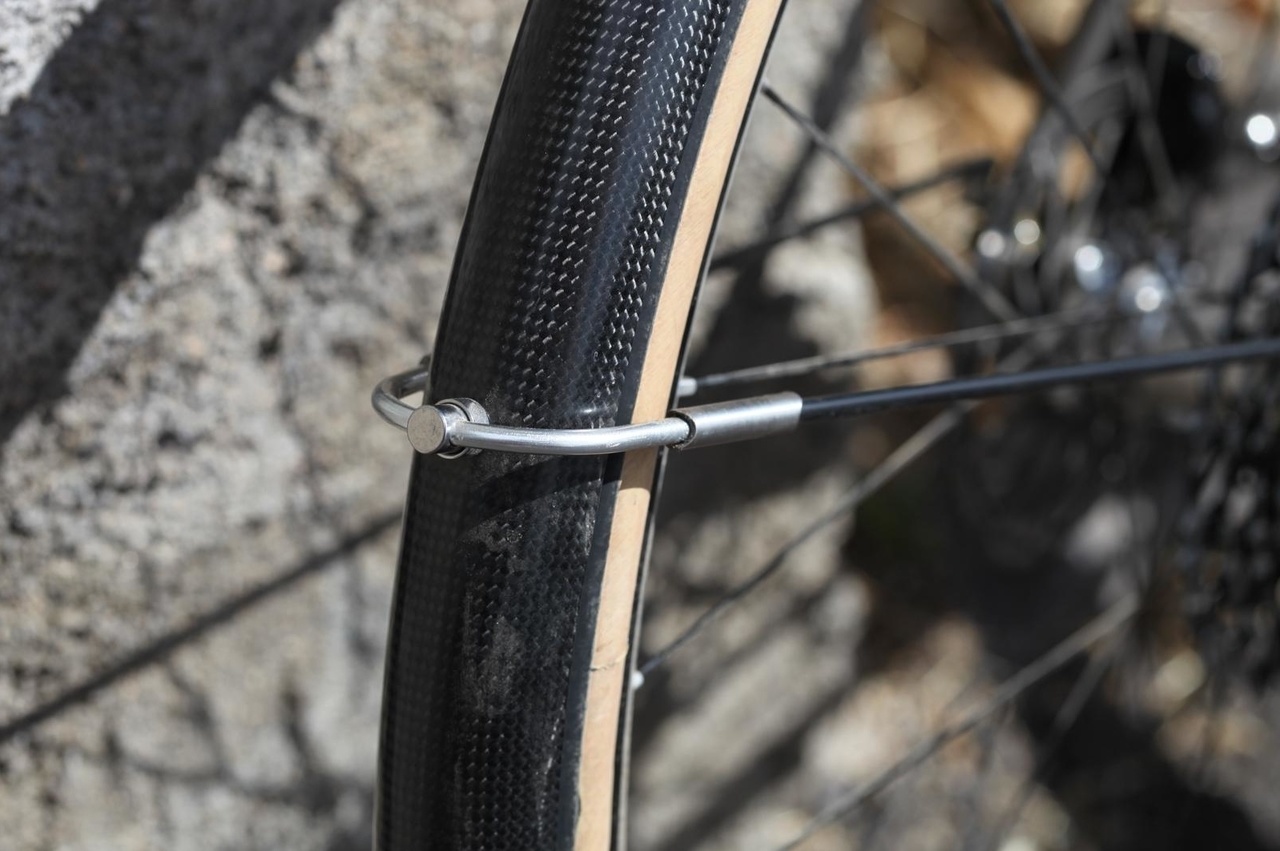 Fenders from - where else? - Great Britain and Swarf Cycles were constructed from carbon.

Continuing the trend of randonneur bikes embracing the latest technology and materials, carbon was used for several of the components, notably the mudguards from British manufacturer Swarf Cycles, and Tune again supplied carbon bottle cages and a carbon saddle that was personalized for Perrusset with an extra 3mm of cushioning and a wrap of leather.

In the end, these careful component choices provided the edge for Cycles Victoire, as Perrusset attests to.

“Our aim was to build a light and reliable bike, with a classic style but modern performance. That’s why we selected some of the latest standards: tubeless tires are lighter and more reliable, hydraulic disc brakes offer better performance in every condition and smooth functioning, 1x11 drivetrain is also lighter, cheaper and more reliable as you take out a shifter and the front derailleur. Also, it was important for us to integrate some carbon parts and the Swarf fenders were a good way to do it. Fenders were not compulsory, but for us it is a distinctive feature of a randonneur bike.” 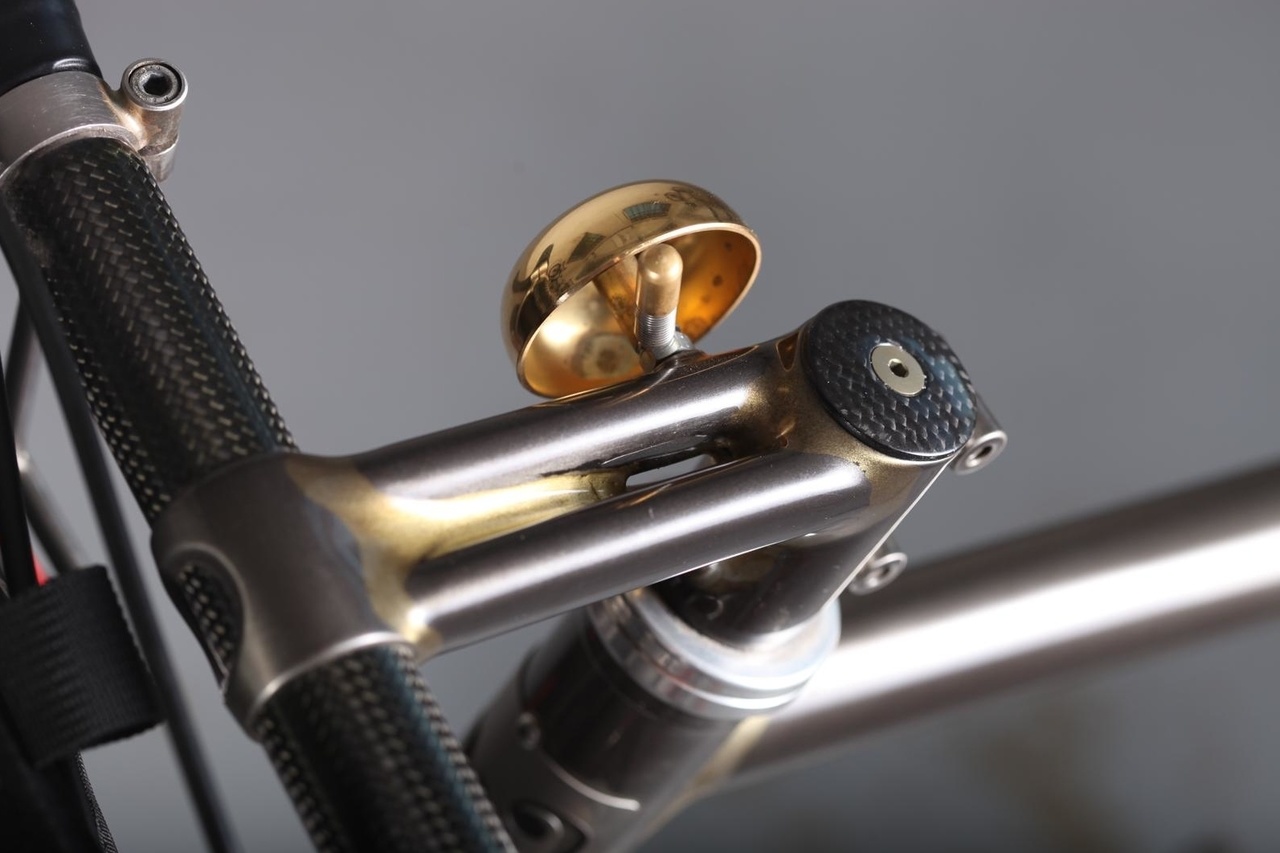 Custom made, channelled stem was built from Columbus Max tubing.

Parts that were custom made by Cycles Victoire included the fork, stem, rack, decaleur (a quick-release mount for the front bag), brake mounts and seat clamp. As the new, revived Concours de Machines was only announced in early February 2016, the production schedule was tight for Cycles Victoire and all the other builders as well, as Perrusset explains:

“We had many ideas initially to make many custom parts and innovative features, but as the timing was very short to build the frame (we started at the beginning of June), we chose to concentrate on building a reliable and light bike. The main new feature was the stem design, which was a last minute idea. It was a good way to highlight our handcrafted skill as it was a bit tricky to weld and polish. The fork blades were also an interesting new feature. Thanks to Reynolds, we were able to build our own blades with a 55mm rake to increase comfort and stability, and the larger diameter enabled us to use disc brakes. We also built our first decaleur. We did it totally on rush as we finished it at 11pm the night before the contest, but we haven’t had any issues so far.”

Indeed, the bike has proved a winner and a stayer, as Perrusset has continued to use it in other randonneur rides and adventures throughout France. 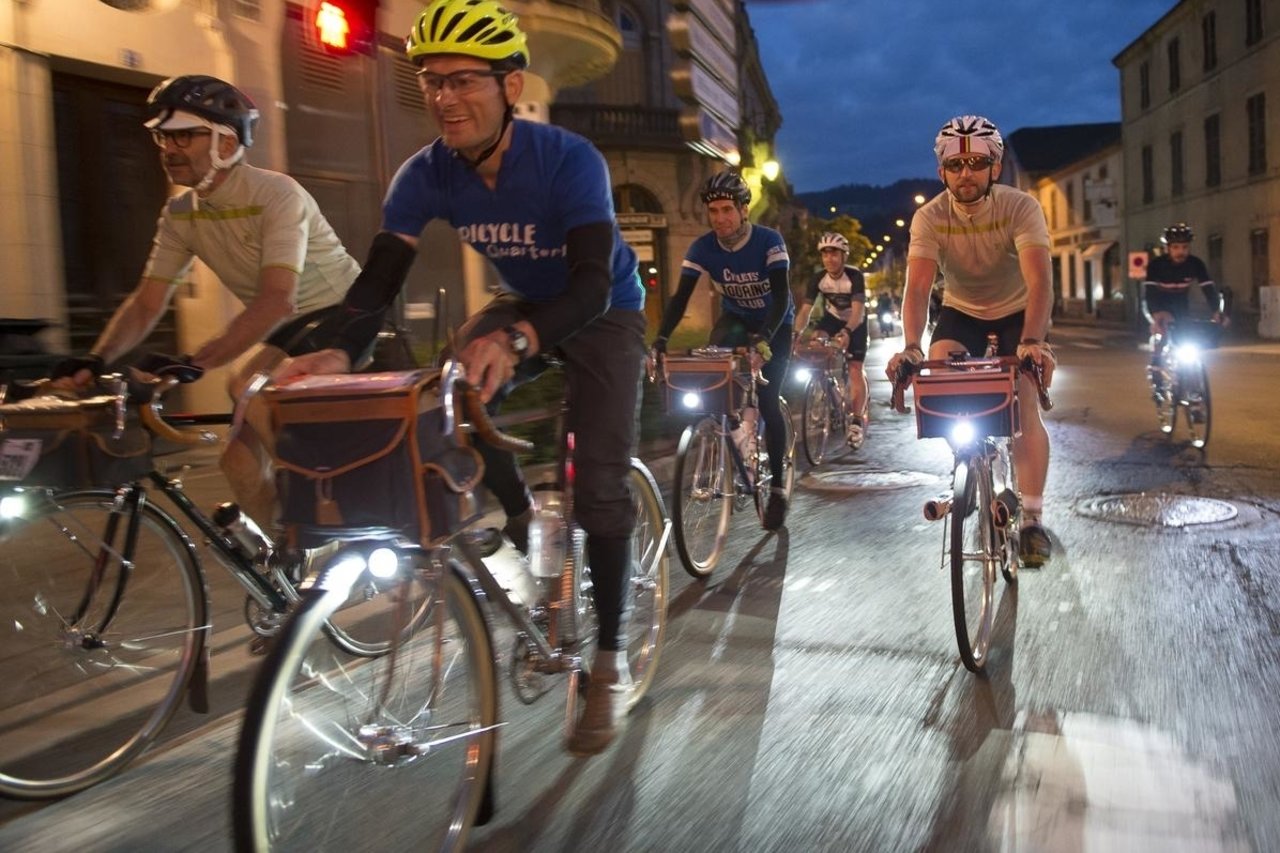 The second stage of the road trials began before dawn.

“Like all of our bicycles, this one was tailor-made. Julien, the boss of Victoire, designed for me a sportive geometry as I’m used to riding my bikes like this, but with less drop between bar and saddles than on my road bike. I feel really good on it: I didn’t have any pains, even after 10 hours on the bike, 235 km and 4200 m of elevation on the 1st stage. The bike is really comfortable on paved roads or on the gravel ones, thanks to the small diameter tubes. The stainless tubing combined with the triple triangle make it also compliant, with good lateral stiffness. On long distances like that, I mainly sit on the saddle, trying to keep a regular pace, and I have to admit that the 1x11 drivetrain was perfect for that. The 42x42 ratio was really appreciated on the first day when at 7am, after 2 hours on the bike already, we met a 15% climb. It was perfect to not go over my limits too early. The Compass Bon Jon Pass tires were also the perfect choice for the contest. They are light and comfortable, with very low rolling resistance. The last stage on Sunday, the gravel one, was pretty rough. A lot of bikes had some issues: broken derailleurs, flats… The bike went really really well, and as a mountain biker I appreciated it a lot! I rode safely to avoid stupid mistakes, but unfortunately I had a puncture on a steep and rough downhill. Thanks to the sealant in the tire, I was able to continue after a few pump strokes and finish the stage in 3rd place. The downhill handling is really safe, stable and the bike corners quickly. I remember the way down the Col du Béal after the 2nd stage with Matthieu Lifschitz, one of the judges, when we overtook many guys with carbon bikes, going fast and smooth on the wet road between the forests.

“I also rode the bike across the Massif Central, from Clermont-Ferrand to Montpellier, this summer. It was a 400K ride I made in two stages. I had about 6 kg in the Swift Ozette randonneur bag, I think. I appreciate even more now the handling of the bike, which is very well equilibrated. The last 50 km to Montpellier were on a big road with a lot of traffic, and I pushed the bike to an average of 30-35 km/hr in TT position, and it went really well!

“Now I have the perfect bike for long distances. I plan to ride my 1st 300K with it this autumn,” said Perrusset.

When asked about changes that Cycles Victoire might make to their entry for next year’s Concours de Machines, based on feedback from this year, Perrusset identifies a few areas for improvement:

“For next year, we’ll work a lot on the integration of all the components, especially the electronic ones. We’ll integrate a dynamo and a USB plug to charge phone and GPS batteries. We’ll also go further into the lightness. Julien thinks that we can save about 1 kg compared to this year’s winning bike. We have learned a lot with this bike, and we’ll improve on this year’s features with a front rack with a wider bearing surface to better stabilize the luggage, more clearance between fenders and tires that may be wider, a stiffer and lighter decaleur, and a better integration of electronic wires.”

That Cycles Victoire was a major sponsor of this year’s event and that they ran out the winner of the competition may signal a conflict of interest to some, and Cycles Victoire readily admit this at their website. But to their defense, they cite the international jury of judges, and on a larger scale, the ethos of the event: more camaraderie and learning through collaboration than cutthroat competition.

“Because if there is a victory, it is the one of the profession,” they write. This would seem to be true also for cycling fans and participants worldwide. 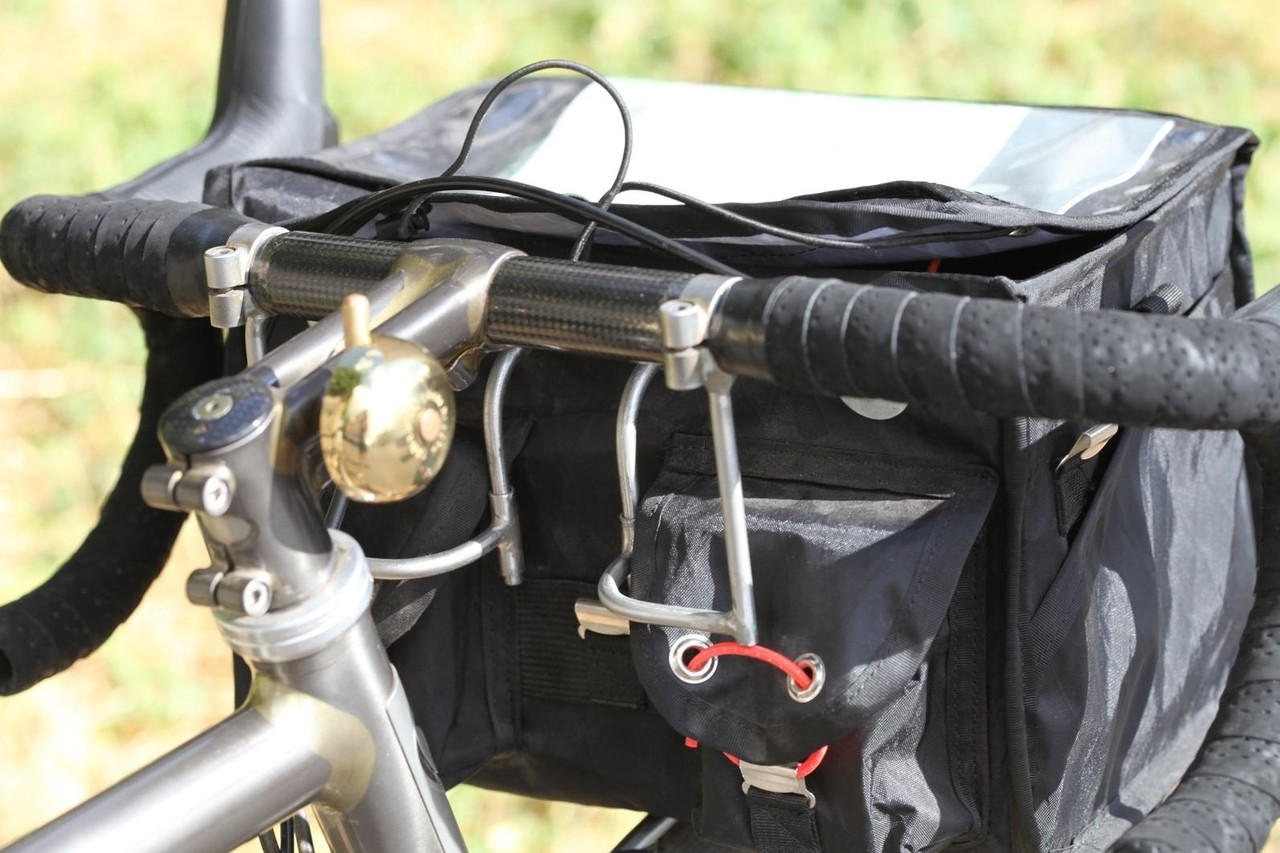 A lighter decaleur and better integration of wires is in the works for next year's entry from Cycles Victoire.