The French competition Concours de Machines awards the most innovative, durable and beautiful randonneur bikes through a series of juried inspections and on-the-road tests. In part one of our series about the event, Brian Ignatin looks back upon its storied past. 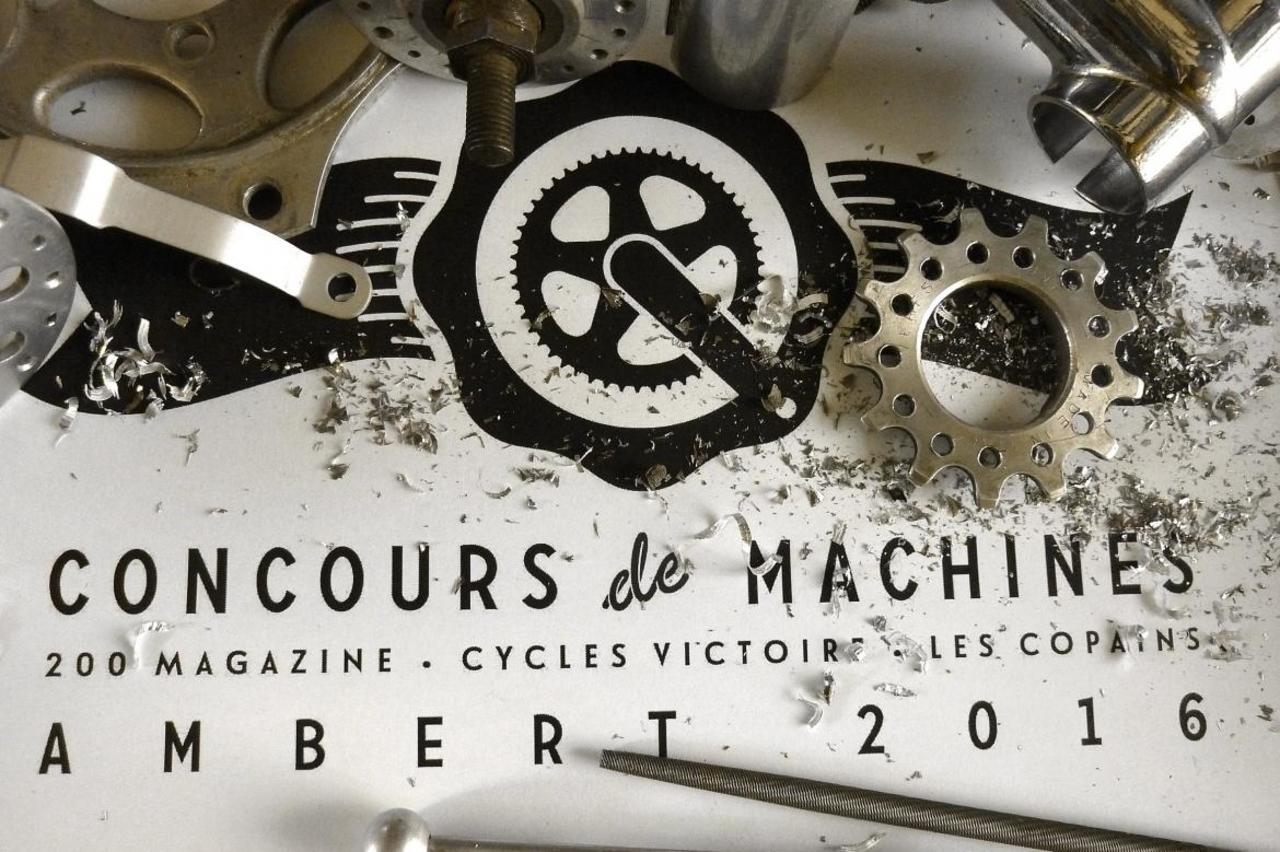 Innovation often comes from unexpected places. We tend to think of advances made by large companies with significant resources. But small firms have many advantages on the innovation front, since they do not have corporate bureaucracy to tend with, and management is typically much more hands-on than in larger firms. This leads to ideas being explored quickly for the sake of a good idea, without the need for market studies, or defined program management. Larger companies often have other priorities.

The bicycle racing world historically has been very conservative. Henri Desgrage, founder of the Tour de France famously did not allow derailleurs to be used; they didn’t appear until 1937, the first edition after he retired. He didn’t allow freewheels to be used until 1912, and even this was with great reluctance.

Meanwhile, Paul de Vivie (better known as Velocio), the father of French bicycle touring and randonneuring, was an early champion of multiple gears, and an early proponent of derailleur systems. He invented his own system in 1905.

In 1902, the Touring Club de France organized a challenge which pitted professional racer, Edouard Fischer (using a fixed gear) vs. Marthe Hesse (a female rider, using a 3-speed derailleur system) over a hilly 200 km course.  Hesse won; it was reported by the press that she “never set foot to the ground over the entire course."

Despite this showing, Desgrange was adamant, and famously wrote, "I applaud this test, but I still feel that variable gears are only for people over 45. Isn't it better to triumph by the strength of your muscles than by the artifice of a derailleur? We are getting soft. Come on fellows. Let's say that the test was a fine demonstration - for our grandparents! As for me, give me a fixed gear!"

The racing world largely stood by fixed gears and single speeds for many years. In the US, many racers rode bicycles with fixed gears in road races well into the 1960s.

Many things we appreciate in handbuilt bicycles today, owe their creation not to the racers of yore, but to the cyclo-tourists of the 1930s and 40s. In this respect, don’t necessarily think of cyclo-tourists as sightseers riding slowly, riding with panniers, and sleeping in tents.  Instead think about the fastest people in your club or at your local shop, who don’t officially race, but love to ride fast and challenge themselves.  These men and women appreciate performance in their bicycles.  As much as performance bicycles today are influenced by developments aimed at racing, 80 years ago, this equation was reversed, and this type of rider was not constrained by the conservative nature of the racing world at the time.

At the time, many innovations came from small high end French bicycle builders, known as “constructeurs”, who frequently were not satisfied with mainstream products and 3rd party components, so they designed and manufactured their own, integrating them into the core designs of the bicycles they produced.

The proving grounds for their creations were the “Concours de Machines” (Technical Trials), which were technical competitions held between 1934 and 1949, to determine the best bicycles, rather than races that determined the best riders. While there were other trials held in France, such as the one referenced above, and one held in the Auvergne region in 1922, it wasn’t until 1934 that a real impression was forged. 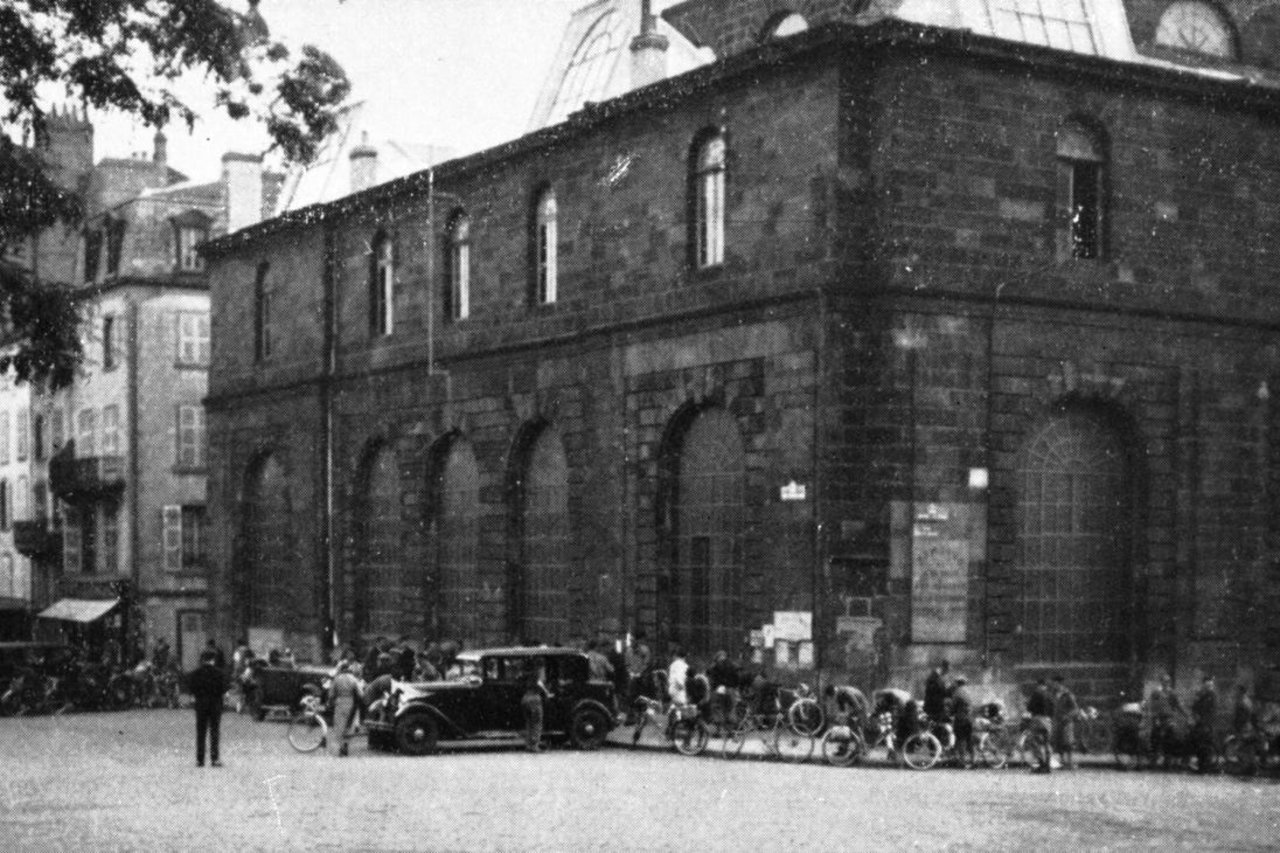 In 1934, the Groupe Montagnard Parisien organized their first Technical Trials, where bicycles were judged based on features such as integration of accessories, light weight and number of gears. Rules for the competition specified certain criteria be met for bicycles to be eligible to participate. The criteria included parameters for frame geometry, required tires of at least 35mm width, and braze-on mounts for all accessories.

The general thinking in the cycling community was that the very light weight bicycles could not withstand the rigors of everyday use To prove that they could, during the Trials each bike was ridden on more than 450 km of rough gravel roads in the mountains of the Massif Central, over the course of 3 stages.

After each stage, the bicycles were carefully inspected for defects and failures; penalties were issued for all non-conformances, including out of true wheels, loose components, and derailleurs that would no longer shift properly. 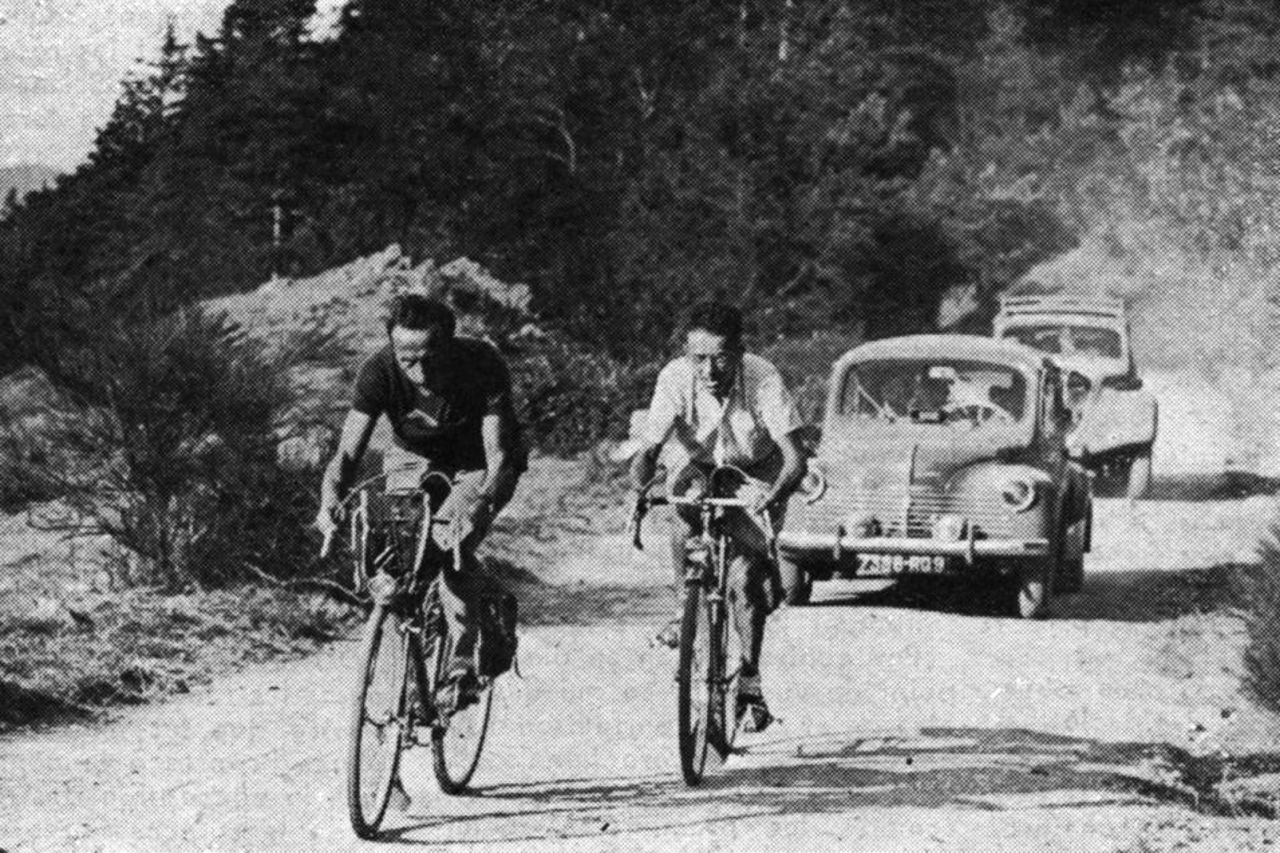 Not the Tour de France, but the Concours de Machines, in 1949.

The winner was determined by a combination of subjective and non-subjective characteristics which included weight, number of failures, and most desirable features. The results were remarkable: the winning bike, made by Nicholas Barra, fully equipped with fenders, lights, a rack and wide tires, weighed only 10.35 kg (22.8 lbs). This was in 1934, when most similarly equipped bicycles weighed almost twice as much: 20 kg (44 lbs)!

In the ensuing years, the trials continued, but were interrupted by the Second World War; they resumed in 1946. In a period of 15 years, nine major trials were held. Development by the constructeurs was rapid in the 30s and 40s as bicycles became lighter and more reliable. Faster riders were enlisted, as points were later awarded for faster finishing times, with the theory being that higher speeds added stress that the bicycles had to endure.

The Technical Trials proved that well designed, light weight, high-performance bicycles were not only possible, but durable, and offered unprecedented performance.  They showcased the capabilities of their manufacturers, and names like Singer, Herse, and Routens became widely respected for their talent and the quality of their machines. 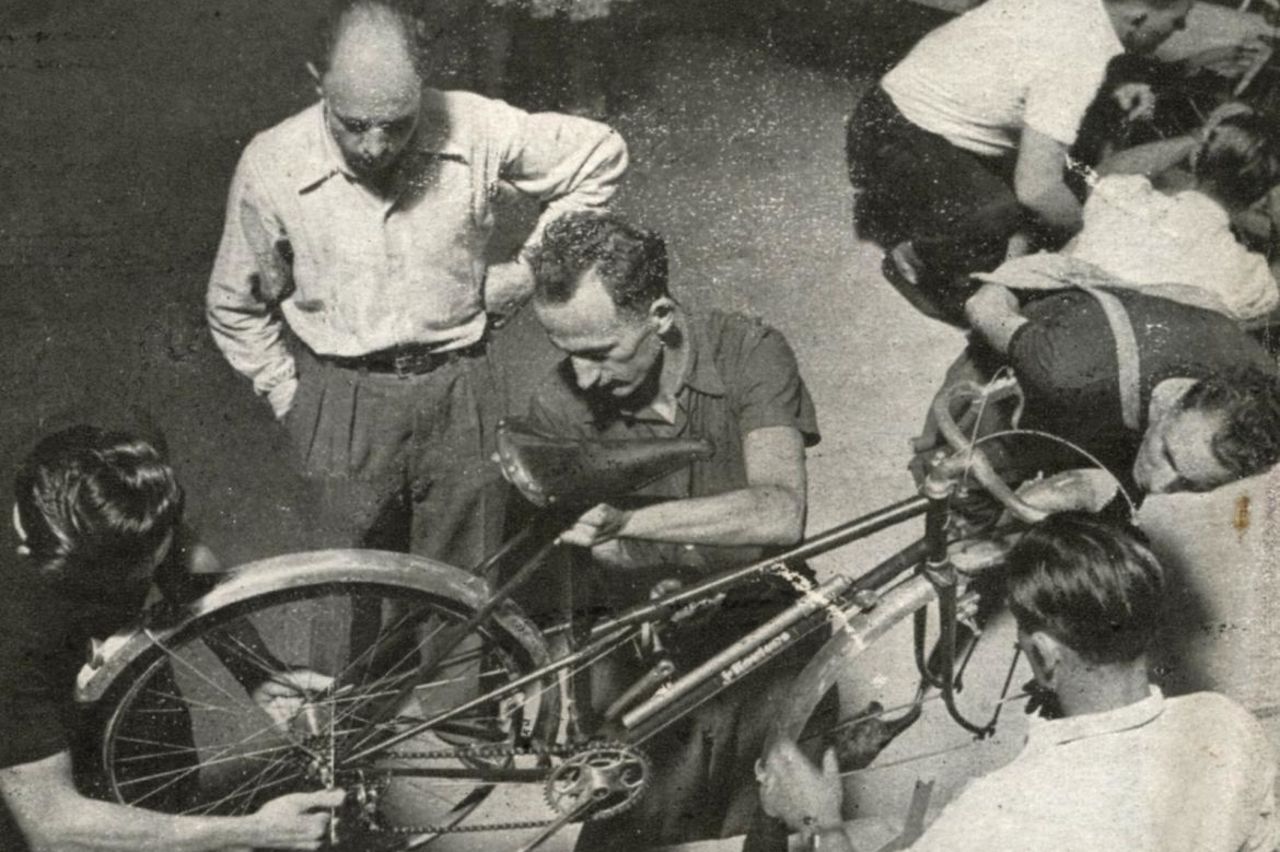 The trials were a huge success, not only for the constructeurs who participated, but also for the cycling industry in general, which over time adopted many of ideas presented during the trials into the mainstream.  Some of these ideas, notably sealed cartridge bearings and aluminum cranksets, whose reputations were made during the trials, are still being used today.

With the recent resurgence of handbuilt bicycles and the increasing popularity of randonneuring and gravel riding, there have been calls for new Technical Trials to be held.  Events such as the Oregon Manifest have been inspired by the original French trials, and adapted them to the world of urban and utility bicycles.

Thus it was with great anticipation that the Concours des Machines returned to Ambert, France (in the Auvergne region) from June 30 – July 3, 2016, which was organized by Victoire Cycles and 200 Magazine.  Their goal was not to exactly replicate the original trials held more than 60 years ago.  The organizers recognized that the bicycle marketplace and centers of production have changed, while new standards, new materials, and new technologies have emerged. They acknowledged that the prominence of craftsman and artisan builders had changed, with much knowledge lost over the years. However, they also recognized that there is strong enthusiasm for handcrafted bicycles, with many new builders entering the field in recent years.

The primary goal of the event was to highlight handcrafted bicycles made by French builders, and to show the general public that there are viable alternatives to the mass-production vision of cycling.  A secondary goal was to improve the work of the participants through the competition.  A third goal was to build camaraderie between the French handbuilt bicycle builders, who do not have opportunity to meet each other very often, hoping that this competition leads to collaboration. 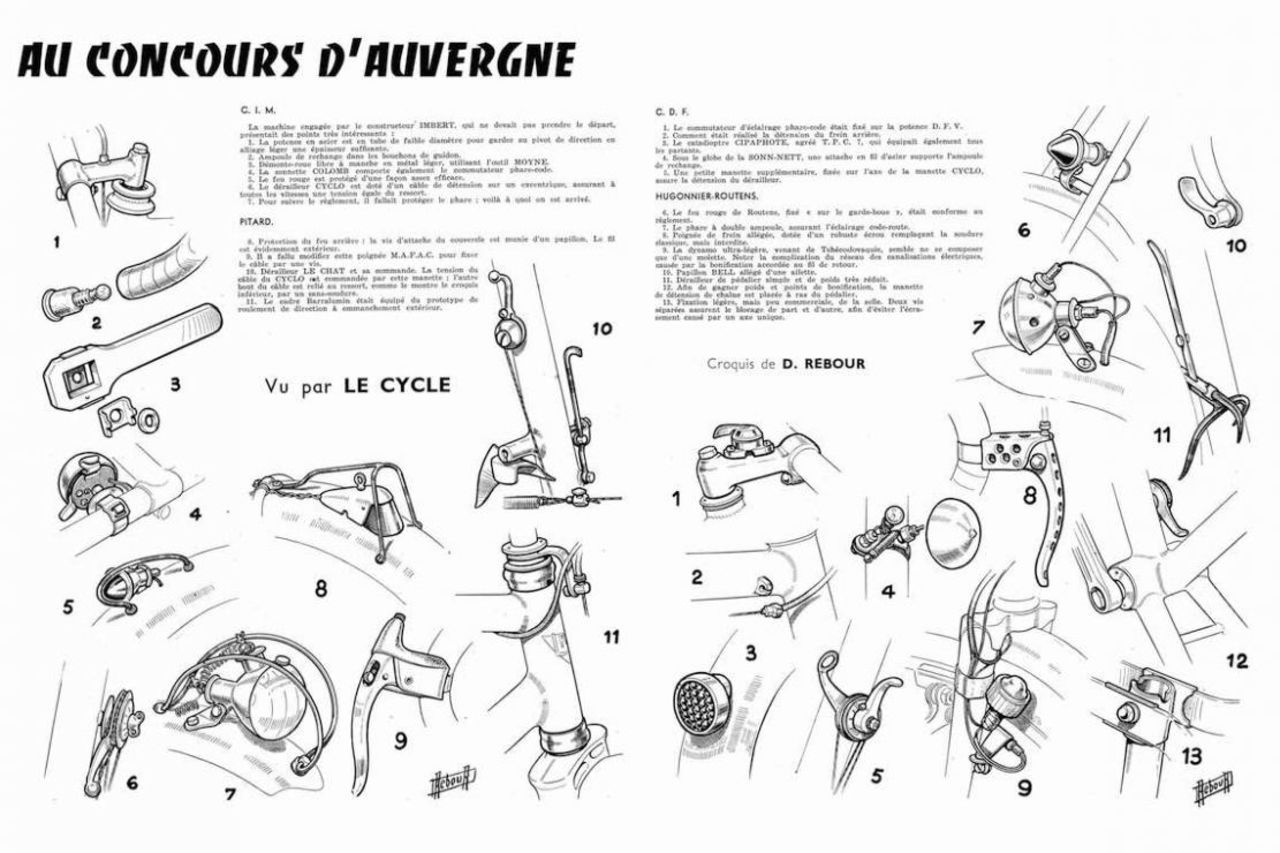 Despite the friendly atmosphere, this was to be a serious competition with 3 days of demanding trials designed to push the bicycles and the riders to their limits. An international panel of judges comprised of historians, builders and technicians were tasked with managing the competition and machines.

Future articles in this series will highlight the format and results of the competition, and will feature a firsthand account of one of the participants.

Author's Note: Much of the information concerning the original GMP Technical Trials comes from Jan Heine, who published several articles in Bicycle Quarterly and on his blog about them.