You Are All Diamonds

Within minutes of looking around the exhibitor stands at Bespoked, Anna Schwinn started remarking on the differences she saw between the work on display there and what she’d seen at NAHBS less than a month prior.  We asked Anna to write down her thoughts. 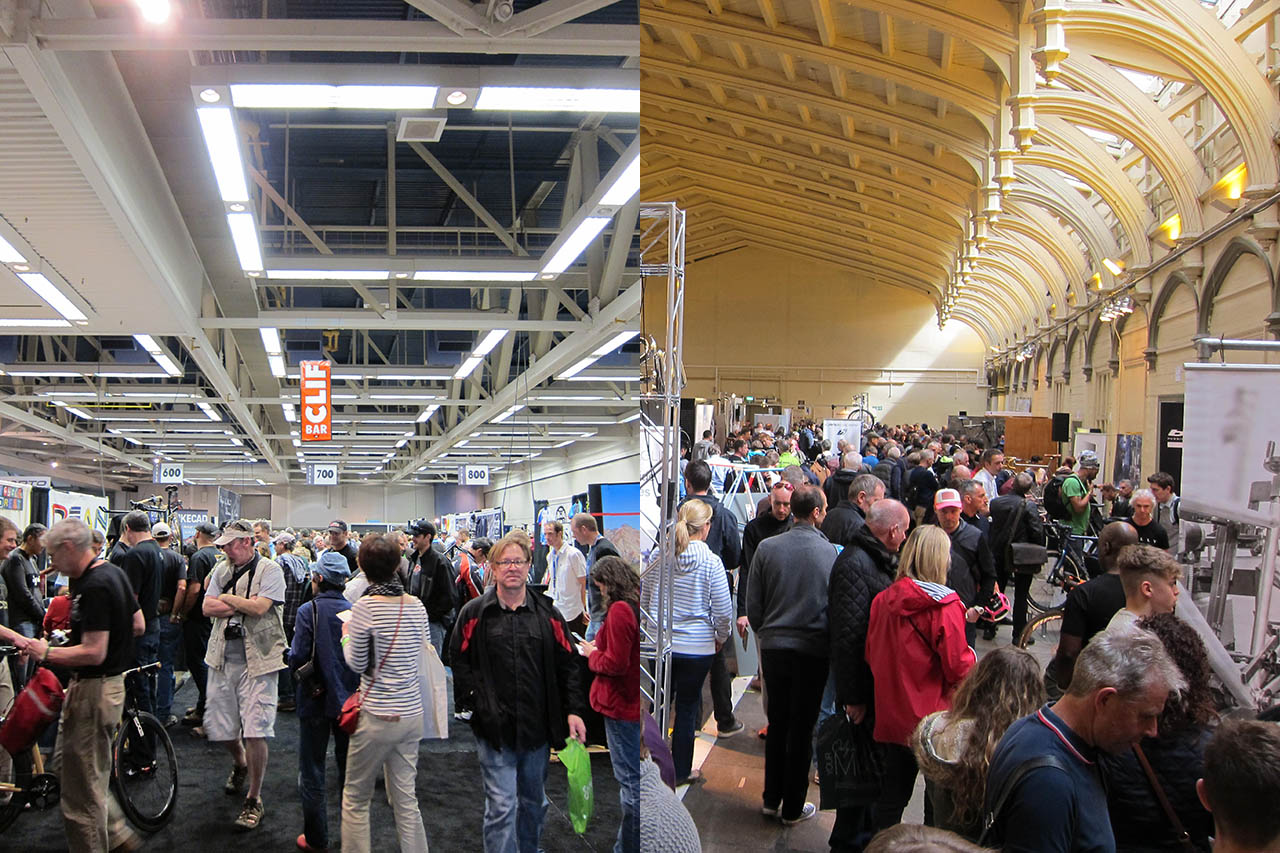 My first time at Bespoked, the United Kingdom's handbuilt bicycle show, made me realize how much I am a product of the American framebuilding community. Walking into Bespoked was like stepping into a parallel universe.

The very word the show’s name is derived from, 'bespoke,' defined as 'custom' or 'tailored,' highlights a long-established trans-Atlantic cultural gap. Within the US, the term is often used to imply that an object was handcrafted in a frivolous, overdone, or antiquated manner and there’s a sense that the object is priced far higher than it’s actual worth. Currently it is often used in a sarcastic or negative context, and rarely in a positive sense–within the US handmade bicycle community at least.

The UK community, on the other hand, seems to have really embraced the term, using it beyond its defined meaning to describe beautiful, classic, highly ornamented steel frames, with distinctly flattering and positive overtones.

These clashing interpretations of the word 'bespoke' really underscore philosophical differences between these communities… at least from what I could gather at the North American Handmade Bicycle Show and Bespoked.

Though the US saw a period where hand-cut, polished, carefully thinned lugs and obsessive, time-intense detailing dominated their show, this type of bike was nearly extinct at NAHBS this year. There has been a significant cultural shift over the past decade to refining the building process. This has created the current climate of clean welds and design that keeps in-step with the explosion of new tire, drivetrain, and braking technology that quickly became industry standards. US builders have embraced big tires and all of the clearance issues that accompany them, with a prominent showing of gravel or cyclocross frames, mountain, plus, and fat tire frames. NAHBS also displayed a great breadth in materials, with a high frequency of independent carbon and titanium framebuilders in attendance.

In contrast, Bespoked was dominated by classic touring and road bikes, fillet and lugged joints, and almost entirely in steel. Many builders in the UK are utilizing complex lugs or hand-carved bilaminate construction (use of both a lug and brass filler to create a joint - ed.). There were only a few UK independent carbon builders displaying at the show, and titanium was almost non-existent. With the exception of the Hack Bike Derby frames, the curved-tube cruiser and klunker-style frames experiencing a surge in popularity in the American market were almost absent at Bespoked.

Infrastructure differences are evident too. Bespoked was dominated by Columbus and Reynolds which are made closer geographically and thus are more readily available in that part of the world. The US has a greater presence of TrueTemper and much of the stainless steel here comes from San Diego-based KVA. Ceeway, the UK’s primary frame-part resource, carries a distinctly different variety of braze-ons and lugs and dropouts than Nova in the US (though Paragon dropouts were popular at both shows). The luscious wet paint jobs NAHBS-goers are accustomed to are fewer and farther between at Bespoked. This type of frame painting exists in the United Kingdom, but still on a relatively small scale.

In terms of process, I was surprised by how many builders use hand filing rather than machine cutting to create miters at joints. In my post-show builder visits I would find that this results from the relatively high cost of machinery and workspace in the UK, particularly in urban areas. In these encounters, I met several builders with no more machinery than a drill press present in their shops. It occurred to me that 'bespoke' may not just be embraced out of taste or culture, but out of necessity due to limitations on infrastructure and equipment.

The UK is currently experiencing a massive swell of new builders, making this an exciting time to visit the show. It is very similar to the expansion the US experienced ten years ago. The UK has a few frame building schools, most prominently the very dynamic Bicycle Academy, which organized the Hack Bike Derby among many other things. Aspiring builders now have more options to start learning the craft aside from scoring a rare apprenticeship or gradually working their way up the ladder in a larger scale shop. Multi-week courses teach skills in brazing, mitering and assembling bicycles, with additional master classes to supplement that education.

At Bespoked, a number of these new builders with little more than a year of experience and a handful of frames in their portfolio display their work in booths adjacent to seasoned builders with decades of experience and thousands of frames. While there was a new builder’s area at Bespoked, many of those displaying in the main area would have had a year or more in New Builder Row at NAHBS, where the minimum requirement for a full both is two years as a professional builder and 50 frames.

For me, the most interesting point of difference between the show communities is the feedback culture and basic level of craftsmanship, the two of which are associated. While many builders presented a well-crafted and thought-out product, and in some cases truly creative and beautiful work, also evident were examples of sub-par work. This was a theme of discussion among builders before the show even opened. The lack of finish work, heat-deformed tubing at the joint, and presence of pinholes (all observable through paint) were visible around the show from new and established builders alike, as were cases of overzealous filing, visibly inconsistent welds, and other visual issues that would lead one to question the deeper level of craftsmanship.

While these themes were discussed between builders, it was evident that current culture of the event has prevented those builders from being openly and directly critiqued by the larger community. Having spent my life in the American frame building culture, I can say for certain that such work would not go undiscussed. I recall in the early days of NAHBS, Jan Heine, of Bicycle Quarterly, tore into builders whose work was below the standard he expected.

This is where the big difference between the shows lies, for me anyway. Bespoked was founded slightly before this new builder boom (domestically facilitated by The Bicycle Academy) and designed to be a public exhibition of the craft. NAHBS, on the other hand, was founded in large part to facilitate mentorship and communication between the established builder community and a swell of new builders that had already been in motion. This is evident in the side programming, with the American show packed with seminars to educate new and aspiring builders. NAHBS offers new builders a venue to announce their arrival and a sometimes scathing forum for critique. Bespoked, on the other hand, takes a softer and more genteel approach–as its name might imply.