Bicycles and Coffee, a retail shop in the western Washington DC suburb of Purcellville, Virginia, serves up the best of artisan bicycles and coffee. 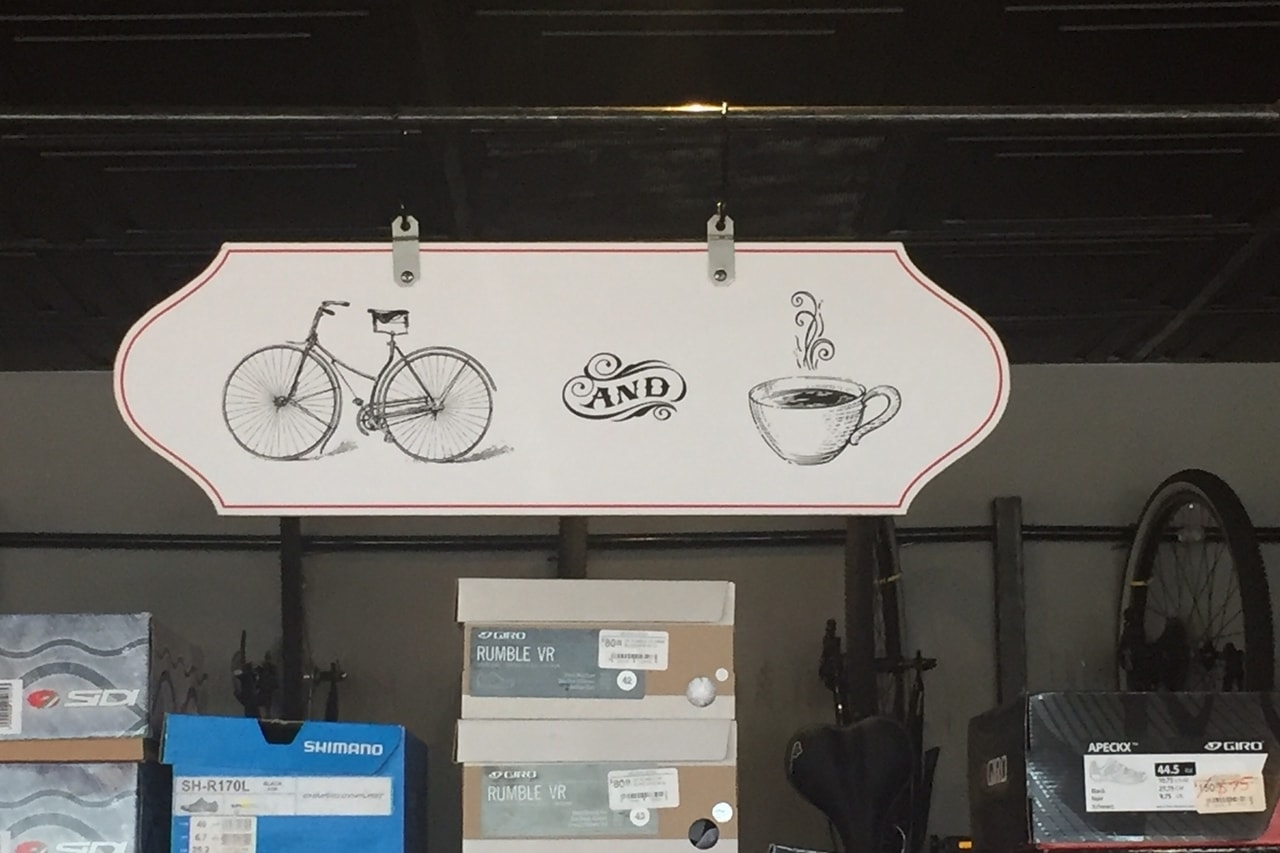 The name of Purcellville, Virginia’s Bicycles and Coffee holds no secrets: the retail shop in the growing community of about 10,000 people on the western fringes of the Washington, DC metropolitan area serves up the best of both prized commodities.

If bikes and coffee are a perfect pair, then it’s matched by the marriage of the two passionate, caffeinated cycling connoisseurs and owners of the shop, Scott and Nicole Davison. Both natives of the Washington, DC area, they spent time in other parts of the country, and overseas, before returning home to open the shop, originally called “Veloville”, four years ago.

During a tenure in Portland, Oregon, the coffee bug bit hard, and the idea to combine the two passions took shape. Having been lifelong cyclists, the Davisons had extensive knowledge of bikes, but the art of the coffee brew was honed through collaboration with Portland’s famed Stumptown Coffee Roasters.

The attention to detail that results in a smooth and flavorful cup of coffee extends to all things bicycle. Nicole and Scott favor the handbuilt, custom bicycle - particularly metal ones - and a couple of different bikes from Wisconsin-based Waterford Cycles are a sure bet to be on display at the shop. Waterford’s associated brand Gunnar Bicycles, with its standard models and nearly limitless custom upgrade options, are a popular choice amongst shop customers. 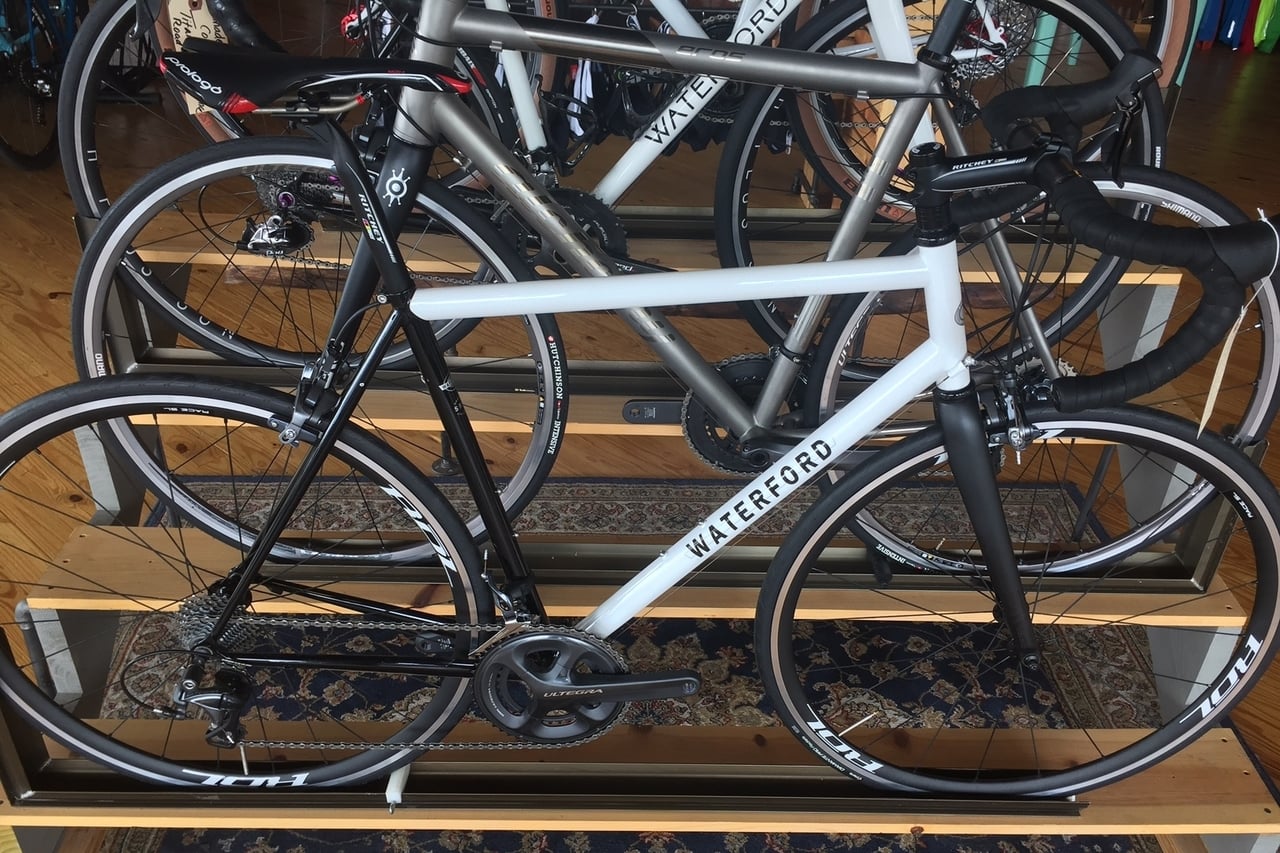 Custom offerings from Waterford and Alchemy.    All photos: Matt Butterman

“The Gunnars are a popular choice for a lot of our customers - particularly ones looking to get into gravel riding - because they represent a great value in a frameset that can still be customized,” says Scott. 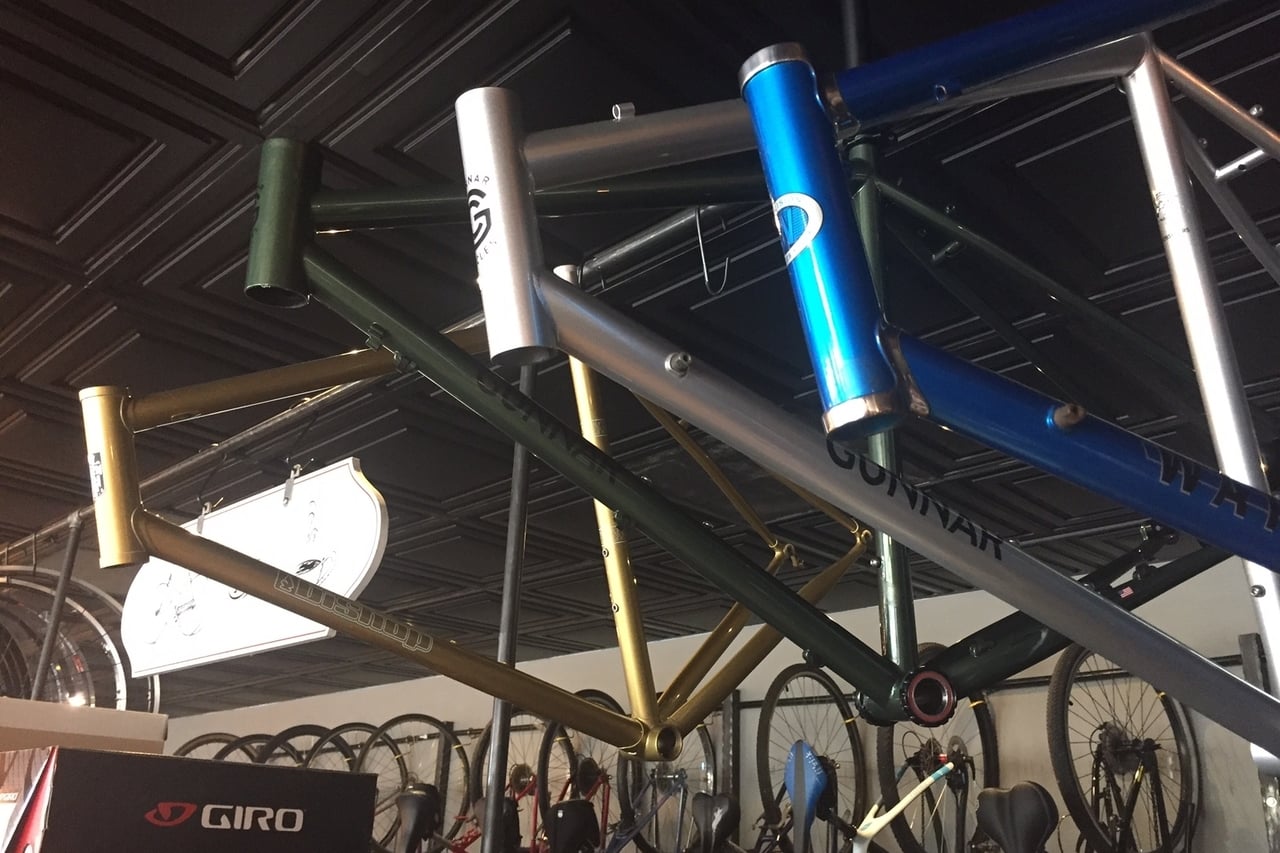 A line-up of artisan bike goodness.

Bicycles and Coffee also offers custom bikes from Denver-based Alchemy Bicycles (including custom carbon options), and, as part of the shop’s commitment to serving the community and sourcing locally-produced items, they work with local, Mid-Atlantic artisan frame builder Chris Bishop to display and take orders for his two-wheeled masterpieces. 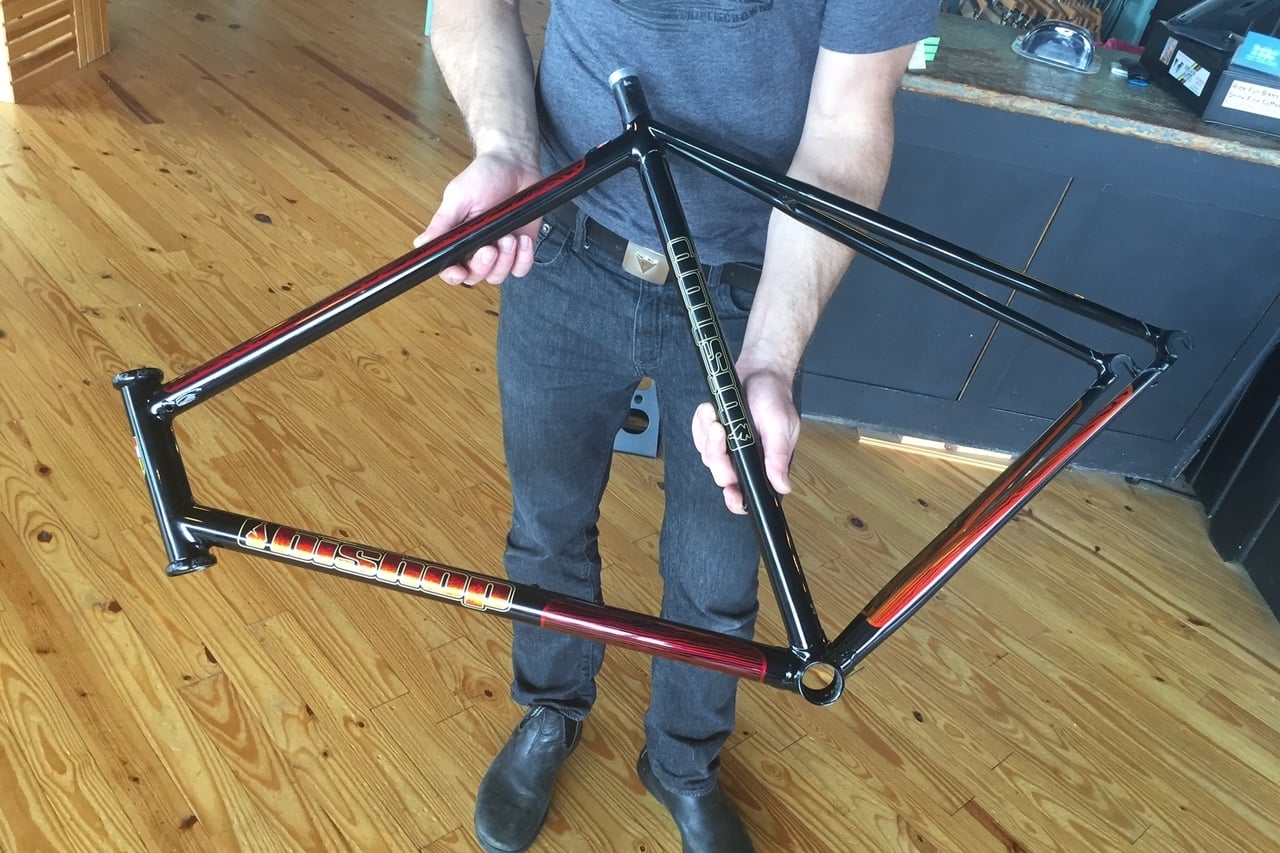 Scott showed us the Bishop frameset that won the Best Finish award at the recent North American Handmade Bicycle Show in Salt Lake City with a paint job done by Black Magic Paint, and which now resides at the shop.

Fostering the local economy is only part of the shop’s commitment to the community. Scott and Nicole are both still active cyclists, and they are eager to share their love of cycling by supporting and even promoting local events. On the morning of our visit, Nicole was leading a gravel riding clinic for women, doing drills and giving personalized attention to the dozen or so participants, most of whom were novice gravel riders and nervous about the prospect of riding on loose gravel.

If you’re an adherent of the blossoming gravel grinder scene, Purcellville and surrounding Loudoun County is a great place to ply your passion, with miles of gravel roads not yet swallowed up and paved over by suburban sprawl. Specialty bikes made for gravel riding make up a large percentage of the custom bikes that Bicycles and Coffee sells. 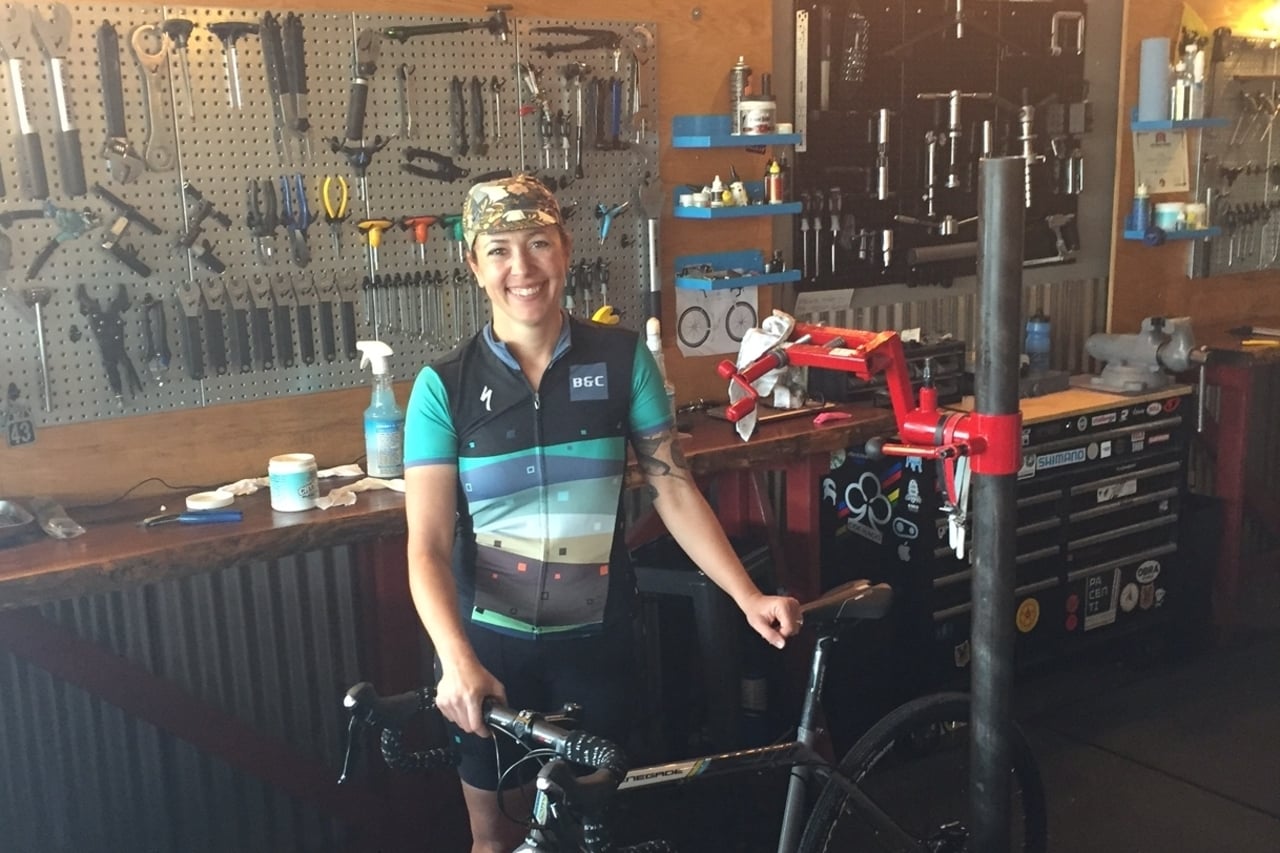 Selling pricey new kit isn’t the primary motivation for the Davisons, however. They look first and foremost to getting people out on bikes and becoming passionate cyclists and part of a special community. Kerry, a women’s gravel clinic participant, mother of four and an IT Project Manager who lives nearby told us, “Scott and Nicole aren’t here to sell you a new bike and push you out the door, they invite you into the local cycling community. Naturally, as you ride more, you are probably going to want to upgrade your equipment or buy another bike, but there’s no hard sell going on. I really appreciate that about them.”

And while Bicycles and Coffee sells the finest examples of product from both realms, they don’t come served with an attitude. They also sell mass-produced bikes at many different price points, including kids’ bikes, and each year they donate kids bikes to local charities for the Holiday gift season. Being a shop that truly serves the needs of the community, and which promotes cycling in all its many different forms, is the most important aim for its owners. 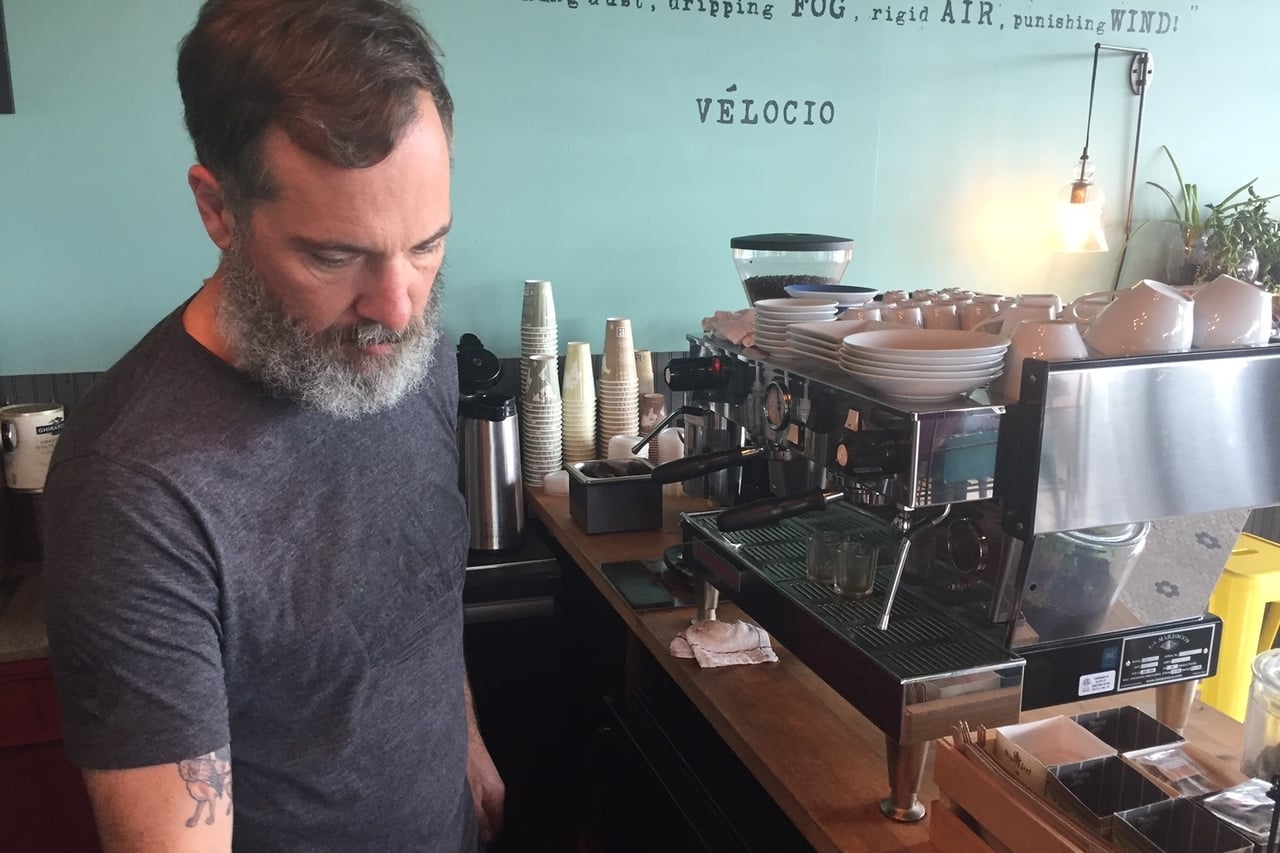 Scott Davison at the coffee bar.

As Scott artfully prepared a cappuccino for a customer, the guiding philosophy of the shop was on full display: quality matters, much more than speed or numbers served. There’s a nice library of cycling books next to the coffee bar for customers to read, and many of them come for the conversation as much as for the excellent brew. It's not a place to grab a quick cup on your way to a meeting.

“There’s a new Starbucks that opened down the road,” he said, “and we’re never going to match their volume, of course. For us, it doesn’t really matter. There’s just a good feeling about doing something as well as we can.”

A good mantra to follow, for both bicycles and coffee.