British builder Ted James cut his teeth in the industry by building BMX frames to replace the frames he'd often break through hard riding. Now he imparts his offbeat style to a whole range of bicycle types. 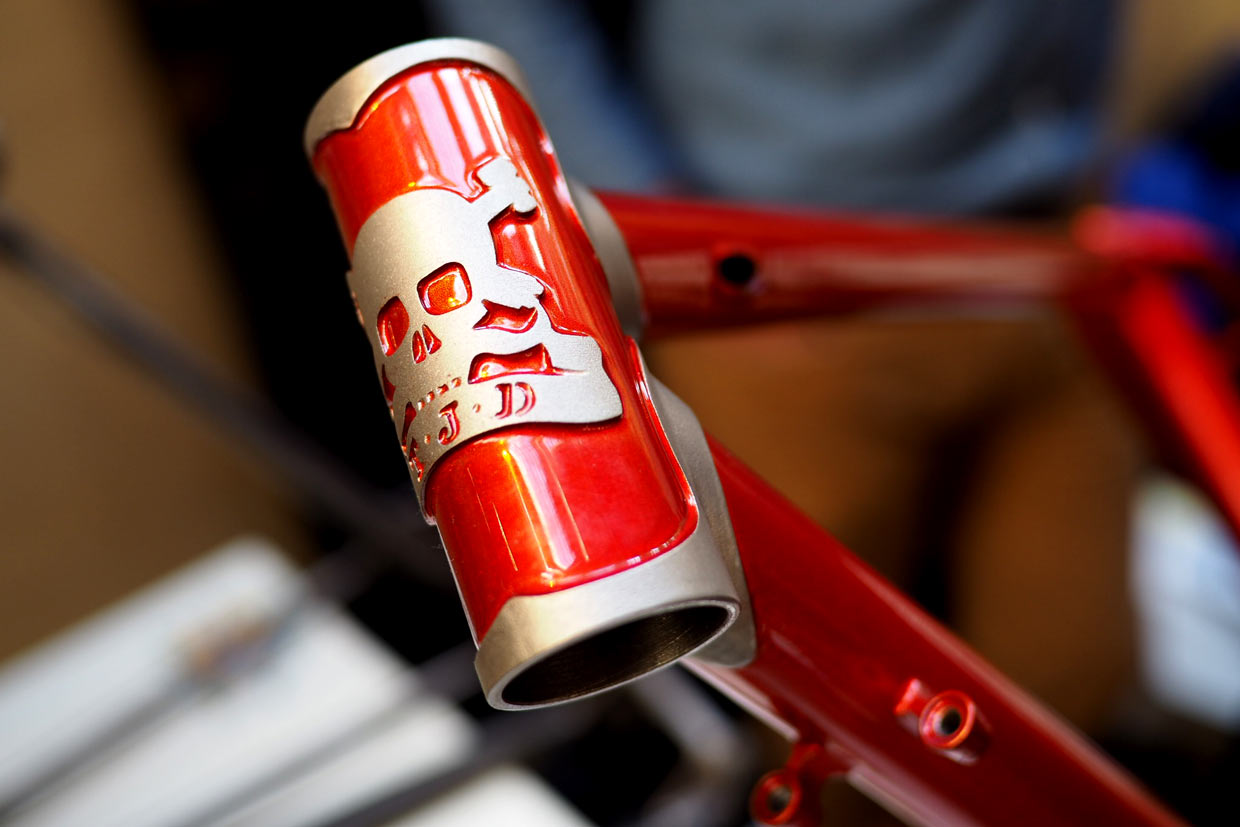 In a show hall full of flawless, polished road frames, the bikes in the Ted James Design booth at Bespoked stood out for the range for genres and types of bikes presented. Ted James took on his first welding apprenticeship at 17, which was a sensible choice of profession for any BMX rider who excels at breaking bikes. Over time, Ted would add fillet brazing and silver brazing to his quiver of skills and would eventually earn the name “SuperTed” during his time wrenching for Condor Cycles.

Hiding in the corner of his booth was Ted’s submission for the Hack Bike Derby. The Derby, a project wherein framebuilders around the UK, with extremely limited time and resources, construct bikes out of found parts and tubing, for feats of strength and bravery. Derby members this year built singlespeed 26in klunker-style bikes to race, fire jump, camp, and crash during the event.

While there were submissions from other builders present, Ted’s submission was exceptional for its tubing and creative construction. The tubing is a roughly fillet-brazed assemblage of tubing from iconic brands, including Thorn, Somec, Bob Jackson, Viscount, and Lee Cooper, with each member still showing the branding of the frames from which they were harvested. At the front and rear dropouts, tubing was crushed and slotted to accommodate the axle. In the case of the rear, a special reinforcement brace was added from seat stay to the dropout in order to fortify the joint for free-jumping over camp fires.

The cockpit of the bike is a massive single piece fork and handlebar structure dubbed “The Bork.” According to James, it was the most involved part of the building process.

The rest of the bike was assembled from found parts. The front brake was a found drum brake. Both front and rear wheels were laced in a “snowflake” pattern to facilitate usage of the found long spokes… and “to be rad.” Handlebar grips were repurposed innertubes with the valves still attached.

Front and center in the booth was this copper all-purpose touring and adventure rig the builder had built for his friend Matt to ride down the US west coast.

“Matt’s crazy, so I built him a crazy bike,” said James.

The bike is copper plated to match Matt’s “high fashion” style and it is dripping with brightly anodized components and fittings- the rear of the bike is green, and the front is blue. The frameset is designed to accommodate any technological whim the rider might have in his builds. The seatstay is split for a belt drive configuration. The hand cut lugs are Rohloff-compatible with a derailleur hanger. The frame is single speed compatible by use of an eccentric bottom bracket. There are fittings to allow for any desired cable routing configuration. And, the bike features couplers to facilitate world traveling.

Matt, who had been trained as a women’s pattern designer, made his frame bag from an old jacket. What was probably most interesting about the bike is that not only had it been toured and ridden, but it had actually been ridden to Bespoked - and was absolutely filthy as a result.

There were several other interesting pieces of note in the booth, including a road frame Ted built for his wife with bead-blasted stainless lugs, a pre-fabrication demonstration of the construction of his trademark unicrown steerer, and sliding dropout systems.