Builder Jon Tallerico of Lodi California's Tallerico Cycles built a penny farthing-style bike from scrap in his workshop. It was a non-serious bike intended to make a point, but it ended up winning him the People's Choice award.

Jon Tallerico's fun project turned out to be a show-stopper. Photo: Paul Skilbeck

Jon Tallerico of Tallerico Cycles is based in Lodi, California, where he moved to from Moab around the turn of the (21st) century. The high-wheeler he brought to NAHBS isn’t made for any customer in particular, “I just made it to draw people to my booth,” he said on the first day of the show. Four days later, back in Lodi with the People's Choice award sitting on his desk, Tallerico was still digesting what had happened. 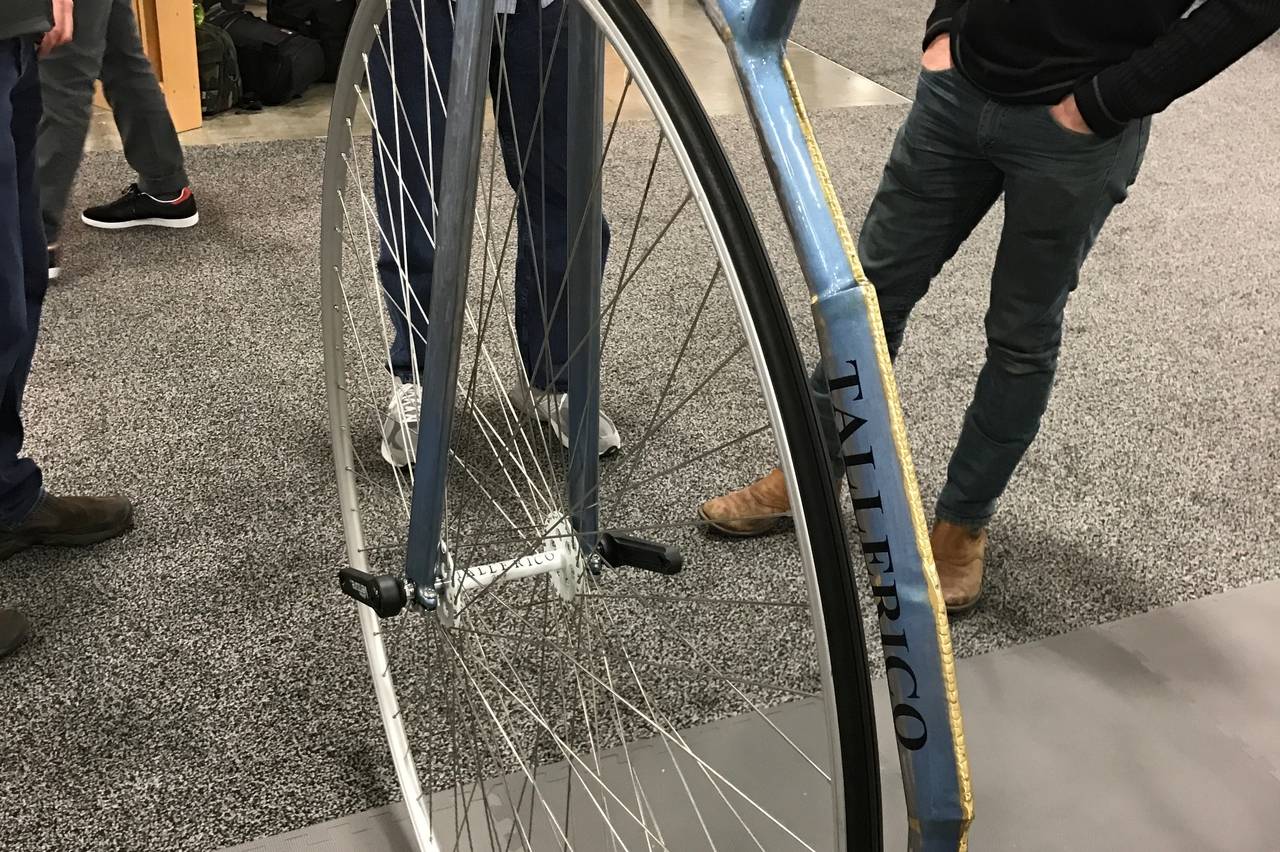 Brass bead on the rear stay was admired by seasoned builders at NAHBS. Photo: Paul Skilbeck

"I was doing an interview at the time of the awards. I didn't hear my name called, and was shocked when I was told I'd won. I didn't know what to say up on the podium, I was at a loss for words!" Said Tallerico.

"The bike has a bit of a fun sense about it. We had T-shirts made with the penny bike on it. It's the OG bike. OG is not Old Guard, but Original Gravel. I wanted to enter it in the gravel bike competition. When they called up the gravel bikes to be judged, but one of the judges stopped me and offered a few words of discouragement. He explained the category is for the purpose of promoting a brand and selling more bicycles." Since the OG bike is less than fully serious, Tallerico didn't argue, but in the end, in winning the People's Choice award the OG bike promoted his brand and helped him sell more bicycles.

"It’s drawn attention to our other products. Since the show we’ve had orders come in and made some sales. In Sac 2012 we sold four complete bikes during the show. Here I’d sold only one bike by Sunday afternoon. Collectors are now bidding on the OG bike with interest running around $10k for the bike with trophy," said Tallerico. 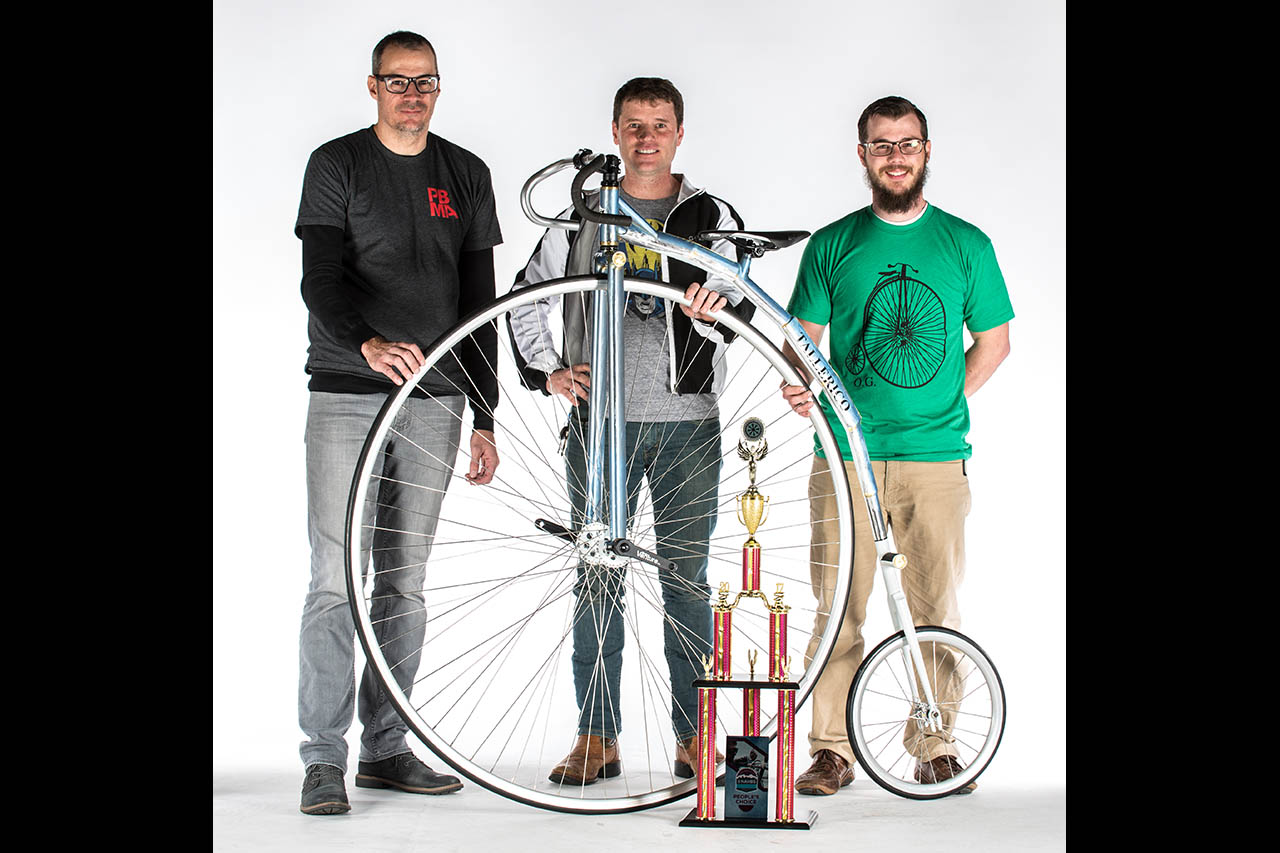 The first thing many notice about the bike is the contrast between a polished, smart front end and a bumpy rear stay. "I wanted to make it obvious we were using scrap tubing. I wanted it to be kind of rough. I’ve never seen a penny farthing that wasn’t rough. Cast iron frames and rims aren't sleek. But I put a pretty paint job on it, and masked off the fillet bead on the back, and added clearcoat, basically to show my torch skills. Laying a bead like that with a torch takes some practice. With all the paint it popped and looked beautiful. Its real intention was to get people into the booth so we could talk about our gravel bike, our 22.5lb mountain bike, and our road bike.

The OG bike was immediately controversial. Some loved it, others saw its true purpose, and a few detested it. "Other framebuilders were scrutinizing it, there was some ribbing," said Tallerico. "I had to defend myself on the framebuilder’s facebook page. But the people just loved it, I’m talking hundreds of photos on social media. It was that object at the show that people wanted a picture standing next to it." Tallerico's business partner James Stanfill suggested entering it in the People’s Choice category after seeing how much attention it was getting.

Sourcing parts for a bike like this is far from easy. "We had to source the wheel from Holland. They sent the wrong spoke length, so I had to get clever to address the spoke length. It’s a five cross, but then (wheel expert) Rick Hjertberg told me that’s the lacing pattern used in a bygone era. So that was a happy accident. I finished building it the week before the show. I didn't want to spend a lot of money on it, which is partly why I used scrap tube sections for the rear stay. Then it was about $300 for paint, $800 for the wheels. White Industries donated one of their new prototype headsets. I didn’t want the trad flat-bar bike, I wanted one like a road racing bike. We used a Paul Comp stem with an old Cinelli road bar. I moved the seat back and down from its standard position so the rider could get more aero. I didn’t want to fully tape the bar, because I wanted it to look not quite ready and a bit silly. The first day of the show I was letting the roll of tape dangle," said Tallerico.

It takes a lot of confidence for a frame builder to produce a bike that is expected to be controversial, especially in the aesthetic sense. But when talking to Tallerico about this bike, there's a clear sense that he's very pleased with the work he put into it. “I seam-welded the rear stay, it’s not TIG. I just washed off the flux and left it raw as it was. There’s been no other finishing. With some care, raw welds can look surprisingly good.”

This way of thinking flows throughout the Tallerico brand. He sells well-made, bikes that are perfectly presentable, yet without the high degree of finishing that many in the handbuilt custom industry practice. This he says, enables him to sell great bikes at lower prices.

Editor's note: This article has been updated from its orginal publication on March 10, 2017.