Three classic-style road bikes from the 2018 NAHBS, all from New England builders. 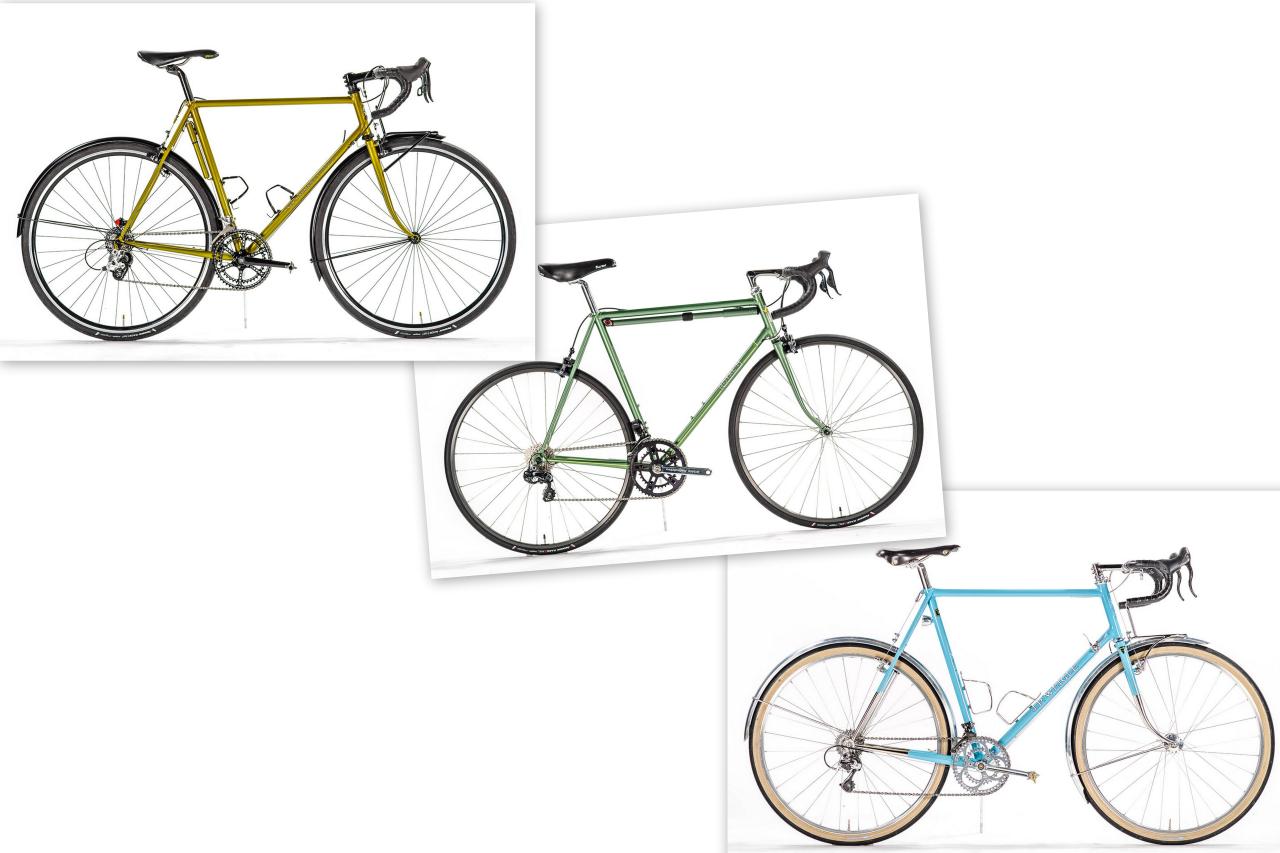 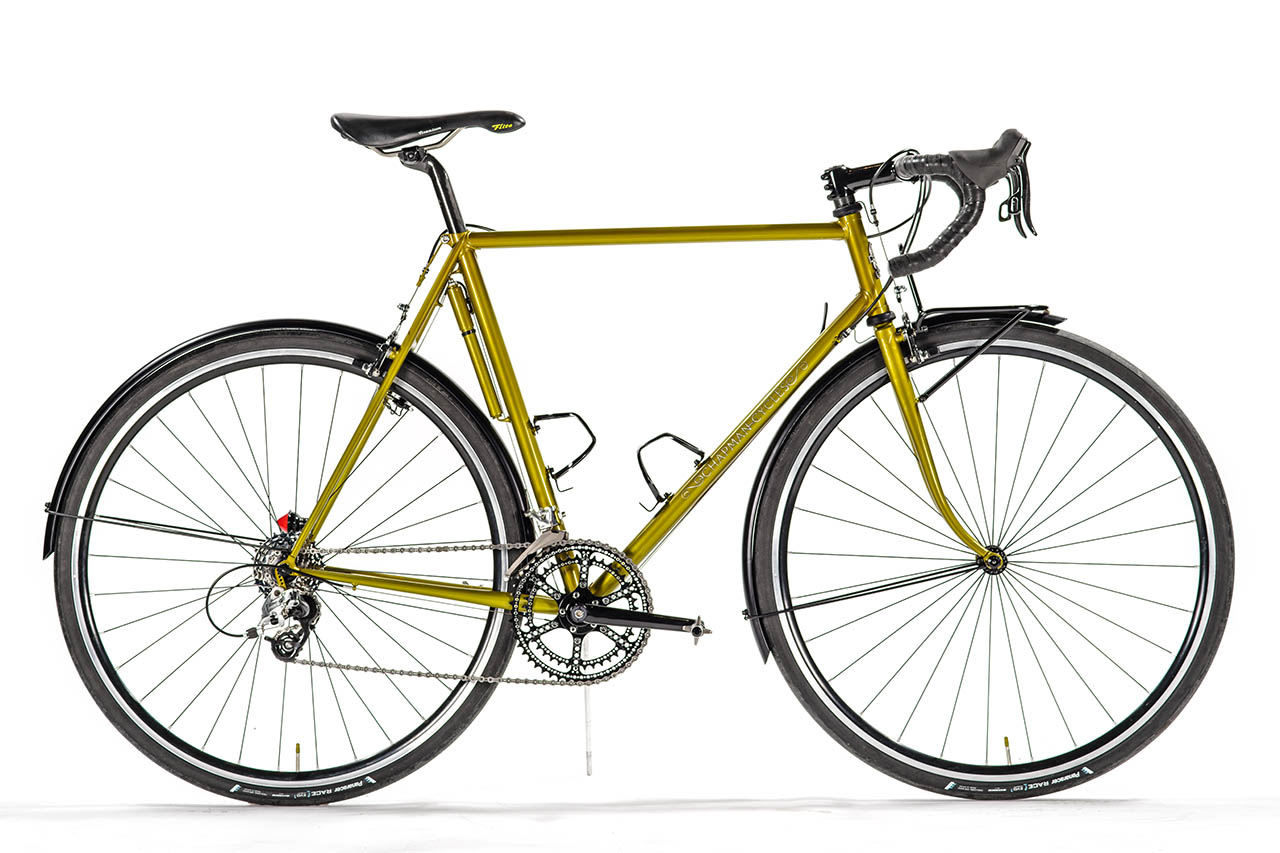 It was to replace my road bike from 2002. My definition of a road bike has changed over the past 16 years to include rack, bag, dynamo, lighting, and fenders.

I like how the pump is nicely tucked away behind the seat tube. The Velogical dynamo is tucked away under the non-drive seat stay. And of course the chainrings and MAFAC Competition brake arms which were drilled by Jon Williams of Drillium Revival!

This bike was to be a road bike and I wanted it to be light weight. The complete bike with fenders, dynamo, lights, pump, and rack is 18.5lbs. The tubing is a combination of Columbus Zona and SL.

The dynamo is activated with a shift lever on the down tube. The Velogical dynamo isn’t really designed with that in mind so I had to fabricate a braze-on, mount with spring, and cable set screw to get it to work as planned.

The finish is an avocado green with yellow candy over. I like that there are very few logos. I stripped and re-cleared the shifters, rear derailleur, seat post, bars, and stem. And I made the fillet brazed crank arms.
Royal H 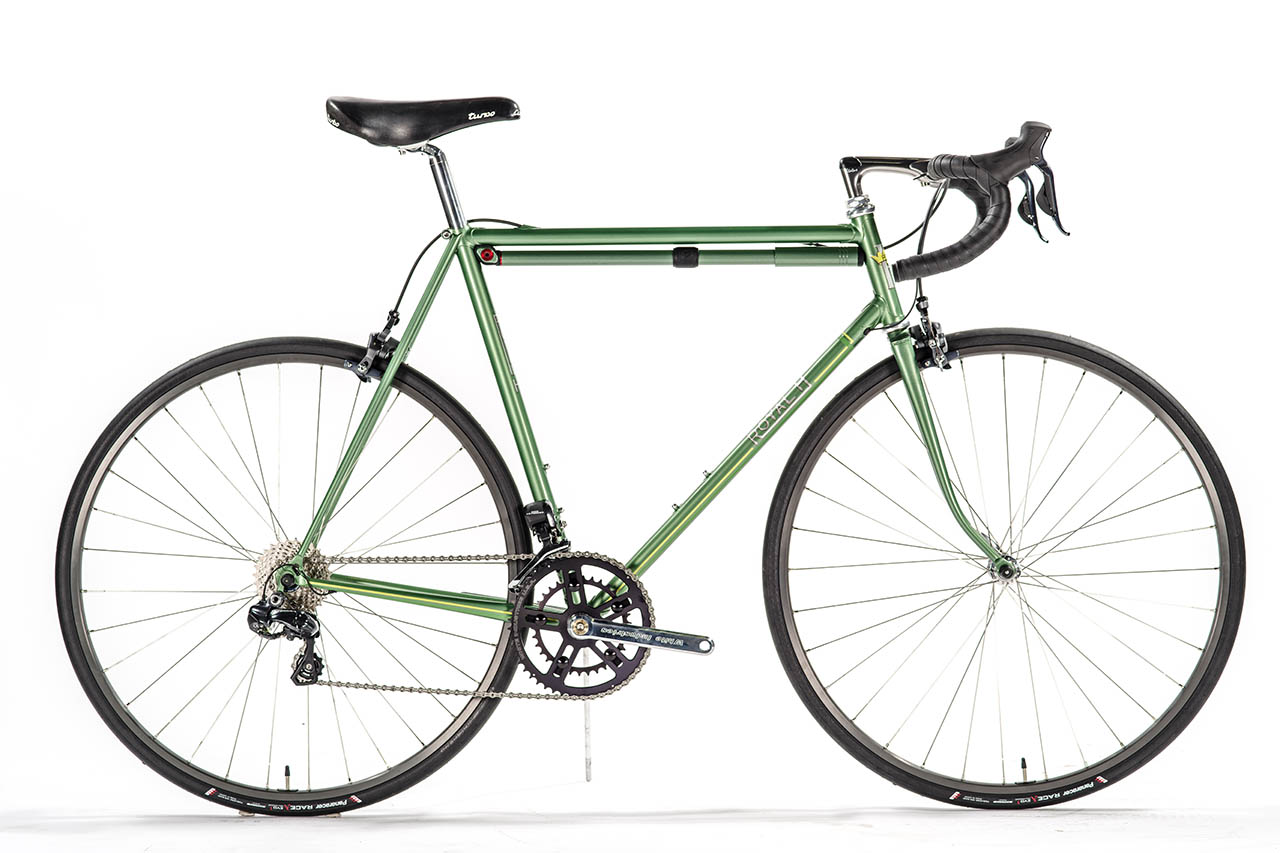 This bike was built as a road bike for a good friend at Seven Cycles. We wanted to combine the classic stance of the 90s steel Italian bikes that we both love, while incorporating top of the line contemporary components. The paint was inspired by the 1979 Saab that the customer learned to drive stick shift on.

Overall, I love the juxtaposition of the Di2 electronic shifting with the classic tube sizes and lug shapes. Specifically, the Zeus 2000 crown was a treat to work with - a dead stock part from Spain that I traded another builder for. The Columbus fork ends and semi-horizontal dropouts were also vintage parts that were fun to incorporate. The routing of the Di2 wires were fun to lay out as well, with the goal being clean lines and a streamlined look.

For this rider's height, weight, and riding style, the Columbus SL tubeset was a perfect fit. I was able to design the chainstays to be relatively short for quick acceleration/handling, while taking advantage of the 1" top tube and 14mm stays to provide the comfortable feel of steel that makes it such a great material for bikes. I paired the very modern Shimano Di2 Ultegra group with more classic silver parts from White Industries. I think the polished silver White Industries cranks and hubs temper the modern look of the Ultegra's greys and blacks. I laced the hubs to the H+Son TB14 hard anodized rims to ease the transition from polished silver to grey. I think the resulting combination of greys, blacks and polished silver strikes a nice balance.

Design challenges, if any

Modifying the Soma Highway One handlebars for the in-bar Di2 junction box was a small challenge. Two small holes were drilled near the end of the bars and a lot of patience fishing the etube cable from end to end. Nothing a few beers didn't help with! In the end, it was a small amount of work that resulted in a very clean, hidden junction box and charging port.

The paint was done by Jordan Low at Hot Tubes. I met Jordan when he was a painter at Seven Cycles years ago, and he is also friends with the owner of the bike, so it was fun to collaborate all together on that. The graphics are all painted, and the shading Jordan did with the Royal H logo just has to bee seen in person- it really looks three dimensional. Exceptional work on that and the box lining on the down tube and chainstays. It's a relatively subtle paint scheme for a show bike, but i think it is powerful and really works with the rest of the bike. I love it! 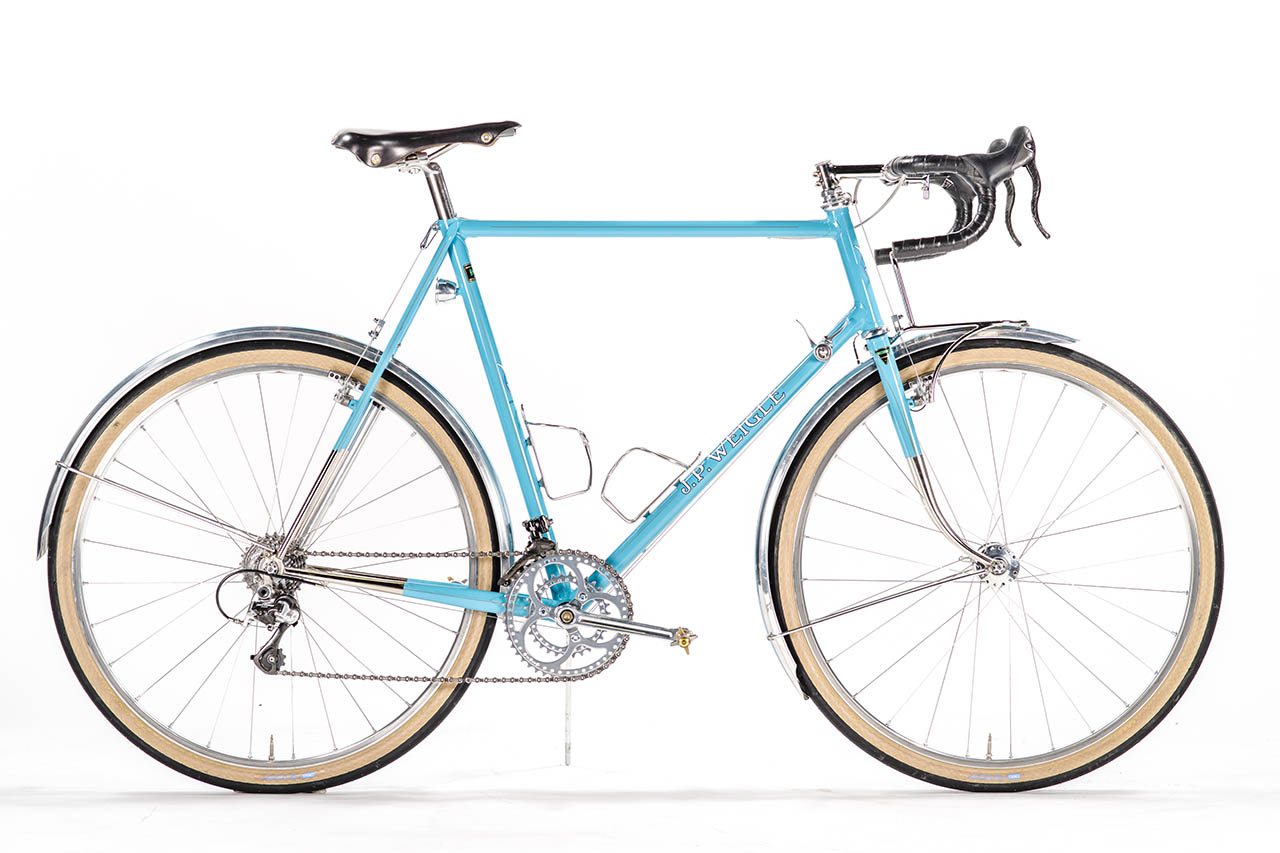 J.P. Weigle Cycles - Peter Weigle
Purpose and inspiration
The bike wasn't built as a "show" bike for NAHBS. It was built last spring/summer to be used at the Concours de Machines competition in Ambert, France in early July 2017. The event consisted of two challenging rides in the mountains over two days to test the machines' performance and durability.  Points were deducted if the bike had any problems, broken parts etc, or if the rider didn't finish the course in the allotted time. Bonus points were given for technical innovations and light weight.
Frame tube and component selection
The frame and the components were carefully modified to reduce overall weight without sacrificing durability. The components include a SON Widebody generator hub, Pacenti Brevet 650B rims, Compass Maes Parallel handlebars, titanium brake pad eyebolts, Compass Loup Loup Pass Extralight 650B x 38 mm tires, Compass René Herse cranks, Gilles Berthoud Galibier saddle, Nitto 80 bottle cages and Maware handlebar tape.
Additional notes
Our bike finished the test with no problems whatsoever, and was awarded for being the lightest bike to finish the event at 9.1kg (20 lbs.). After the Concours the bike was shipped to Japan for a challenging ride over several mountain passes. The bike was cleaned up two weeks ago and new tires were installed for the NAHBS show. It may have been the only bike in the awards ceremony that had a previous pedigree and one that had proven itself in competition.
Randonneur Steel J.P. Weigle Cycles Chapman Cycles