This ain't no grasshopper. Moots brought a prototype titanium soft-tail bike to NAHBS that will have adventure cyclists salivating. 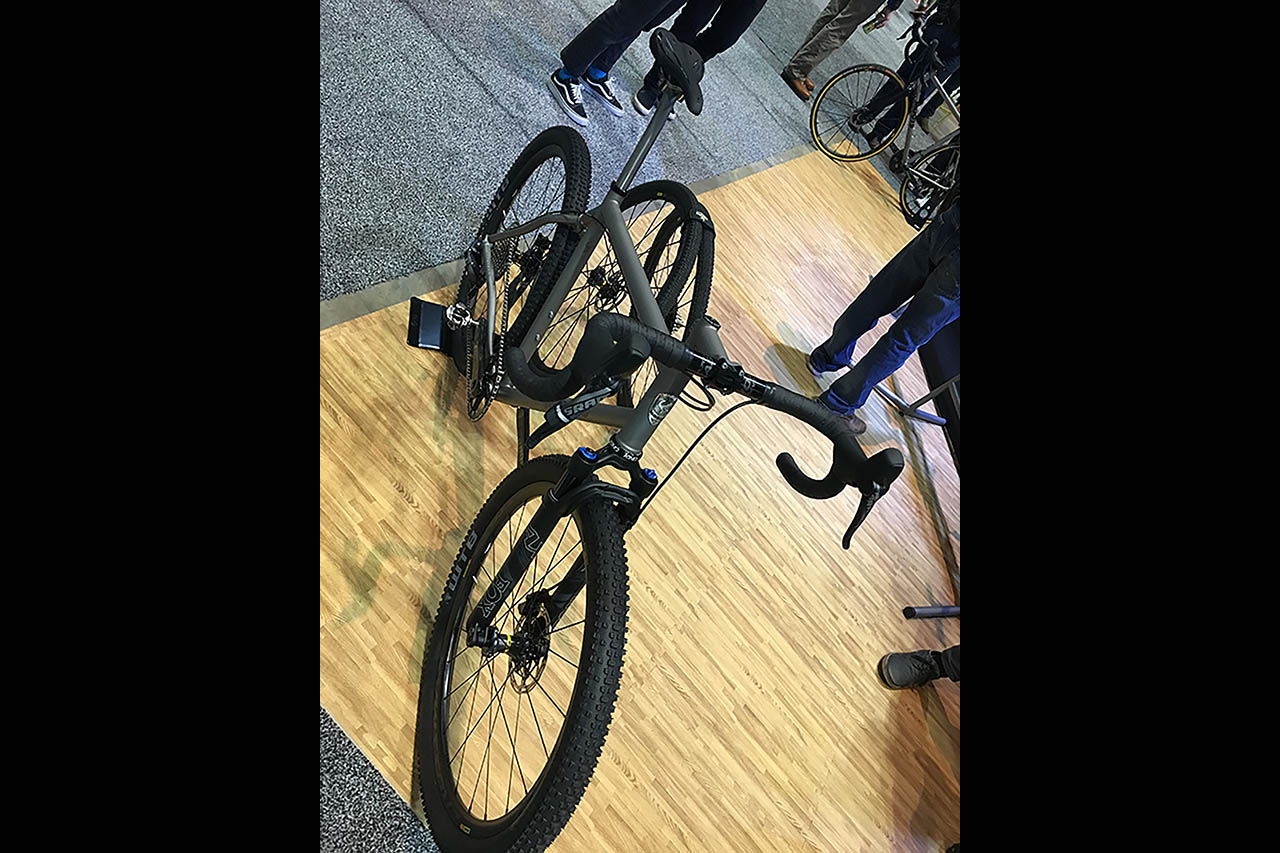 One of the more exciting mixed-surface bikes at NAHBS. All photos: Mark Hallinger

Moots has been around since 1981, and for a long while have been known as a leading specialist in titanium frames. In the early 1990s they developed one of the early rear suspension systems for cross country mountain bikes and still use that wishbone shock system today. With a home base in the Rocky Mountain outpost of Steamboat Springs Colorado, at 6,732 feet, there is no shortage of dramatic terrain to inspire their ideas and the prototype bike they unveiled at NAHBS this year one looks pretty much ready for the challenge.

It's a gravel softtail (or a ‘short travel gravel beast’ as they call it), harking back to their early mountain bike suspension principle, although now this approach is regarded more as hybrid of a mountain bike and road bike. It actually works quite well in both applications, as well as in between. Endurance events such as Ride the Divide helped push early develoment of the adventure/gravel genre, and with much of the market now opting for the road less traveled (mainly by cars) bicycle companies continue to explore, looking for the best approach.

Which is not to say Moots is new to the game of gravel bikes. Far from it, which is why when the company comes out with a bike development we are particularly interested. We're seeing this up at the Adventure end of the Gravel spectrum.

The bike has been added to Moots' established Routt line of gravel bikes. Features include a scaled down version of Moots' established YBB pivotless suspension from the company’s mountain bike range, which has 20mm of travel and is made from titanium.  Other touches include size-specific 3/2.5 titanium tubing and Moots thru axle dropouts and BB shell. The head tube is also machined by Moots, and the titanium frame, stem and post, all made in-house by Moots, have an etched Premium finish. SRAM  Force brakes and derailleurs and a Chris King headset complete the setup.

The bike also had a modified Fox fork for 27.5 inch wheels, which will run with 2.25" tires, or 700c hoops with a 45mm tire. With the disc brake, you could choose your rim/tire size depending on the terrain and how much of an air cushion you'll need. This is Moots’ first bike specifically designed for both wheel sizes, according to Moots President Drew Medlock.

Testing will be taking place this spring. One engineering challenge already overcome was keeping the chain on the single chainring, away from the fat 27.5 tire. 20mm of travel is a lot for an adventure bike, and with the suspension forks you've got a bike that will remain sure-footed on some rough trails.

It's an exciting looking bike, alright. A different handlebar setup with flat bars and the 135mm Deda Aero Blast extensions would provide more control on the descents, while keeping a compact frontal area for big headwinds. Possibly with some short bar ends for an extra hand position. Such a thought might be heresy to some purists, but when you're pushing out the envelope from the inside all options should be considered.