Hollingsworth is a line of classic touring bicycles from Royal H Cycles' Bryan Hollingsworth and his uncle Pete. The renowned British marque Holdsworth was the inspiration for this family collaboration.

In the Royal H booth at the recent Philly Bike Expo was a touring bike labelled a “Hollingsworth” that seemed to be inspired in looks and stately design by the English brand Holdsworth.

It turns out that Royal H’s owner’s name is Bryan Hollingsworth, but the bike was in fact inspired by a Holdsworth owned by Bryan’s uncle, Pete Hollingsworth, and it’s quite an interesting story.

Pete Hollingsworth is a master craftsman and woodworker who, like his brother and nephew, is also a cyclist, and the three of them were planning to do a trip from Boston to Montreal a few years ago. Pete was cajoled by his brother into purchasing a used Holdsworth touring bike at a swap meet for $500. He begrudgingly bought the bike, unconvinced of its utility and suitability for the trip ahead.

The three took a shakedown journey from Princeton, New Jersey up to the border with New York and back through hilly terrain that somewhat resembled the higher mountains ahead of them on their Boston to Montreal trip. Pete Hollingsworth began to change his mind about his used Holdsworth as the miles piled up beneath his wheels.

“I loved it,” Pete Hollingsworth said. “The more I rode the bike, loaded down with full panniers and gear, the more I realized that this sort of journey was what this bike was meant to do.”

Then, on a tricky descent in Hunterdon County, New Jersey, Pete Hollingsworth suffered a bad crash that destroyed his Holdsworth touring bike and sent him to the emergency room.

As he recovered and began to ride again, Hollingsworth yearned for the geometry and overall ride of his defunct Holdsworth. He discussed the idea of a build with his nephew Bryan, and it snowballed into a plan for a formal re-creation of all the best features of his old Holdsworth.

At about the same time this plan was hatched, Pete Hollingsworth was changing his artistic medium from wood to metal after attending a seminar on lugs given by master frame builder Doug Fattic at the 2015 Philly Bike Expo. Hollingsworth began to create intricately shaped lugs from metal, making use of his skills honed as a wood craftsman.

With his nephew’s frame shop and fabrication skills added to his new aptitude for shaping lugs, Pete and Bryan Hollingsworth launched the Hollingsworth line of bikes. They are not copies of the classics, but new classics!

Along with the hand-cut lugs for each Hollingsworth, Pete also hand-draws all of the retro-design graphics and decals for the bikes. 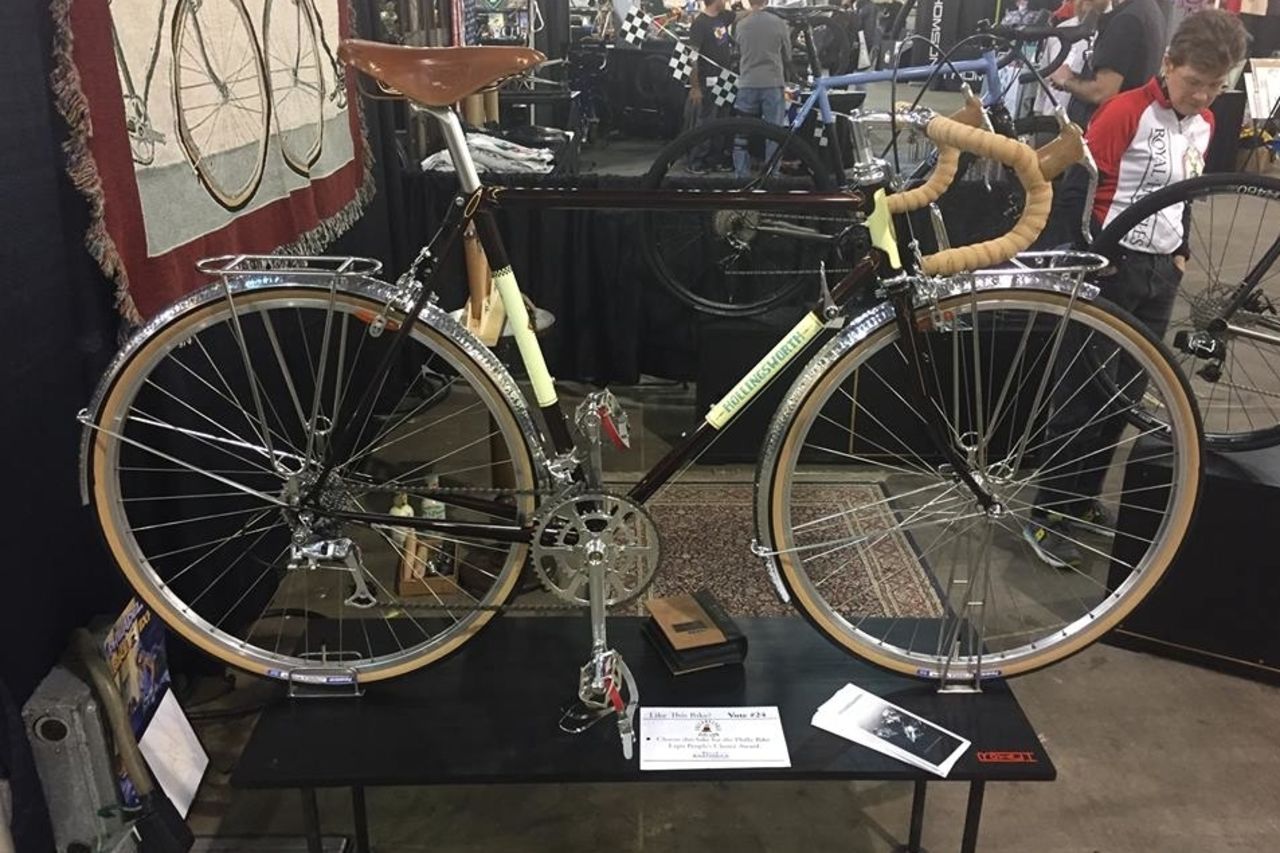 The bike Pete Hollingsworth showed at the Philly Bike Expo was built with what he termed a “dog’s breakfast” of tubes: some Columbus, some Tange and some Ishiwata. Hollingsworth plans to create tongue-in-cheek “DB” seat tube decals for this mongrel mix in the near future. The bike had 56cm x 56 cm seat and top tubes, with a 104cm wheelbase.