Bamboo is an evergreen, flowering perennial plant subfamily of the grass family Poaceae. It’s a staple crop of great economic and cultural significance in its native southeastern Asia. And it’s also the material of choice for Colorado-based Boo Bicycles.

Bamboo is not a wood, as commonly misconceived, but a grass. More specifically, it's a composite material of fibrous vascular bundles that has higher compressive strength than wood, concrete, or brick, and a tensile strength that rivals steel. It’s also much lighter than traditional metals. If it sounds like an ideal material for bicycle frames, you’d be correct, and Boo Bicycle’s CEO, Nick Frey, would certainly agree with you.

“Bamboo truly shines when used in a bike frame because of its immense bending stiffness and lively feel.  This is why some of the most expensive and top-end fly rods, skis, and longboards are made with bamboo,” says Frey.

Frey’s opinion comes with authority, not just from his years racing professionally on the road for the Jamis-Sutter Home cycling team, but also by way of his engineering degree from Princeton University. In fact, it was at Princeton that Frey built his first bicycle frame from bamboo.

“We started building a frame with bamboo and carbon fiber for a mechanical and aerospace engineering course at Princeton. We were initially just looking for something to impress the professor, but then we realized that bamboo has incredible properties that lend itself to use in bike frames: super stiff in bending, forgiving in torsion, light, resilient, durable and with the ability to absorb high-frequency vibration. Boo grew out of this desire to build the ultimate custom bike frame made of any material. Bamboo happened to be the material we believe is the most ideal for rough and demanding conditions.” 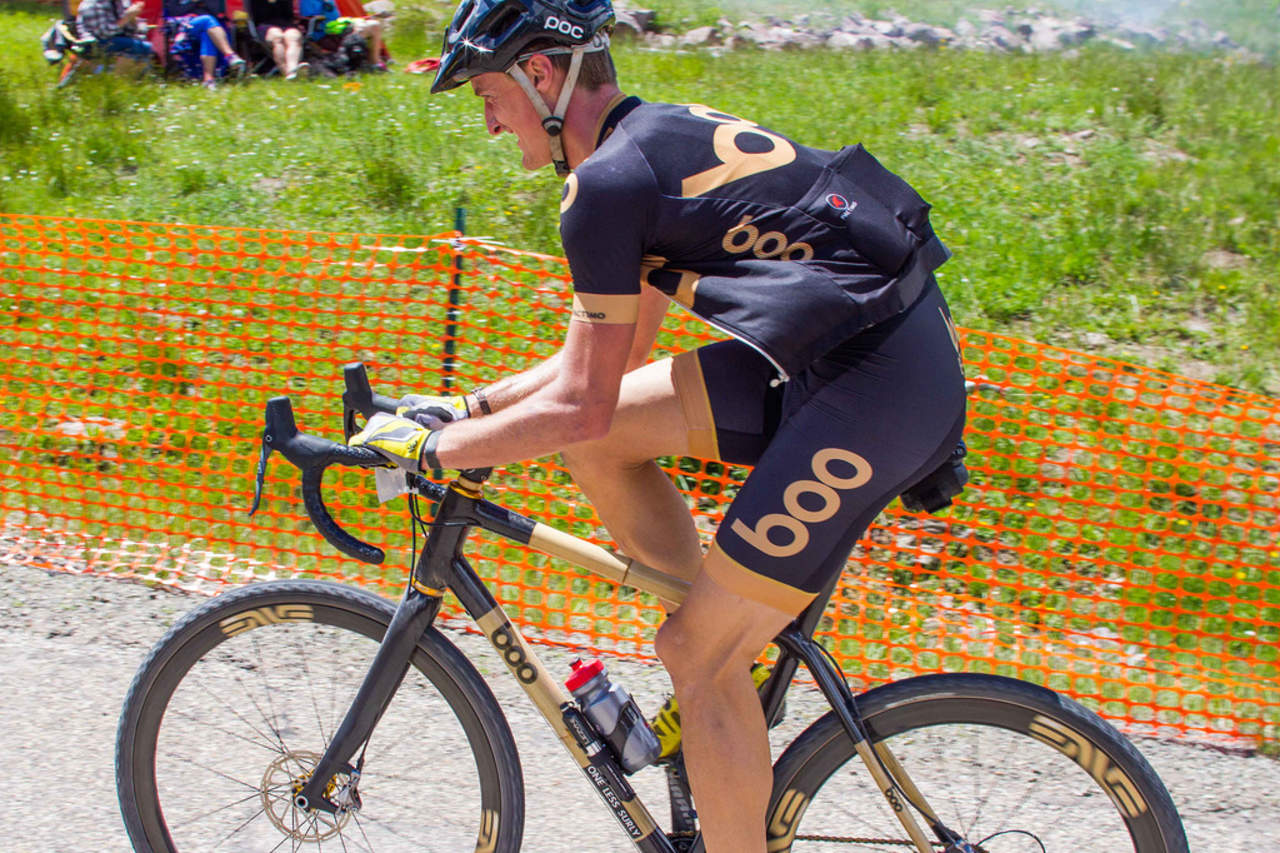 It was in those rough and demanding trials on the road where bamboo earned its stripes as a frame material for Frey.

“As a professional cyclist, I knew the key to staying with the front group or making the break had mostly to do with your athletic preparation.  However, quite often one’s preparation was stellar, but his or her comfort on the bike and confidence in its handling would be a limiting factor. If I couldn’t rail a corner, and instead felt a bit cautious, I would lose a couple spots in every turn, and with sometimes eight turns in a 1km lap, I was in the danger zone 100 guys back before I knew it.

“Bamboo provides the ultimate performance in a bike because it has torsional forgiveness and it dampens vibration.  When you’re cornering, the bike provides a very slight degree of twisting compliance that lets you simply dive bomb a corner and hook up. Like any sports car with brilliantly tuned suspension, it’s critical to have some give without letting the car lean. Bamboo combined with carbon fiber is the best of both worlds, and the rider feels almost at one with their machine, meaning there is absolutely no limiting factor on performance - other than training and preparation!”

Boo began building bamboo frames in 2009, but the use of bamboo for bicycles began much earlier. In 1894, a British company, Bamboo Cycle Company, obtained a patent for their bikes made from bamboo sourced from Great Britain’s colonial dominions in southeast Asia. Two years later, Americans August Oberg and Andrew Gustafson obtained their own U.S. patent. But the development of higher quality steel alloys, and the easier sourcing of steels closer to production facilities in Europe and the U.S., meant that bamboo was largely abandoned as a frame material for much of the twentieth century.

But by the dawn of the 21st century, Asia had replaced Europe and the U.S. as the epicenter of bicycle production, at least in terms of mass production. The Asian focus of the bike industry, combined with growing demand for sustainability of building materials, meant that bamboo made a comeback in the handmade bicycle niche. And despite the easy sourcing of bamboo close to major factories in China and Taiwan, bamboo requires an expertise that Frey believes can never be replaced by machines.

“Bamboo will absolutely remain an ultra-niche material. It’s too difficult to work with and takes too much skill and experience. We are happy for it to be this way - we don’t want bamboo frames to ever be mainstream, just like a Ferrari will never be a daily driver. It’s an exotic, boutique, and exclusive bike for a discerning rider who wants to invest in a purchase that will last many, many years. If any of us wanted to strike pay dirt, we likely wouldn’t be in the bike industry!  So instead, we are striving to further perfect the bike frame with one of the most unique and difficult materials in the world,” said Frey.

In fact, Boo does have production in Asia, just not by a machine in a factory, but by an expert expatriate American craftsman named James Wolf.

“Every Boo frame is handmade in Saigon, Vietnam. My partner James “Bamboo Master” Wolf eats, sleeps, and breathes bamboo. Literally. He actually has lived in Saigon for over two decades and, with his wife Lam, runs an entire bamboo plantation. This is not ordinary bamboo that he works with. It’s a special variety named dendrocalamus strictus.  It is also called “Iron Bamboo”, and is so rare that we have to grow it ourselves. It actually destroys machines that attempt to form it into a laminate structure, which is what most bamboo products are in the First World. We use it because it basically blows away any other natural material in the world, and it has traits that a 100% carbon fiber bike simply does not,” said Frey. 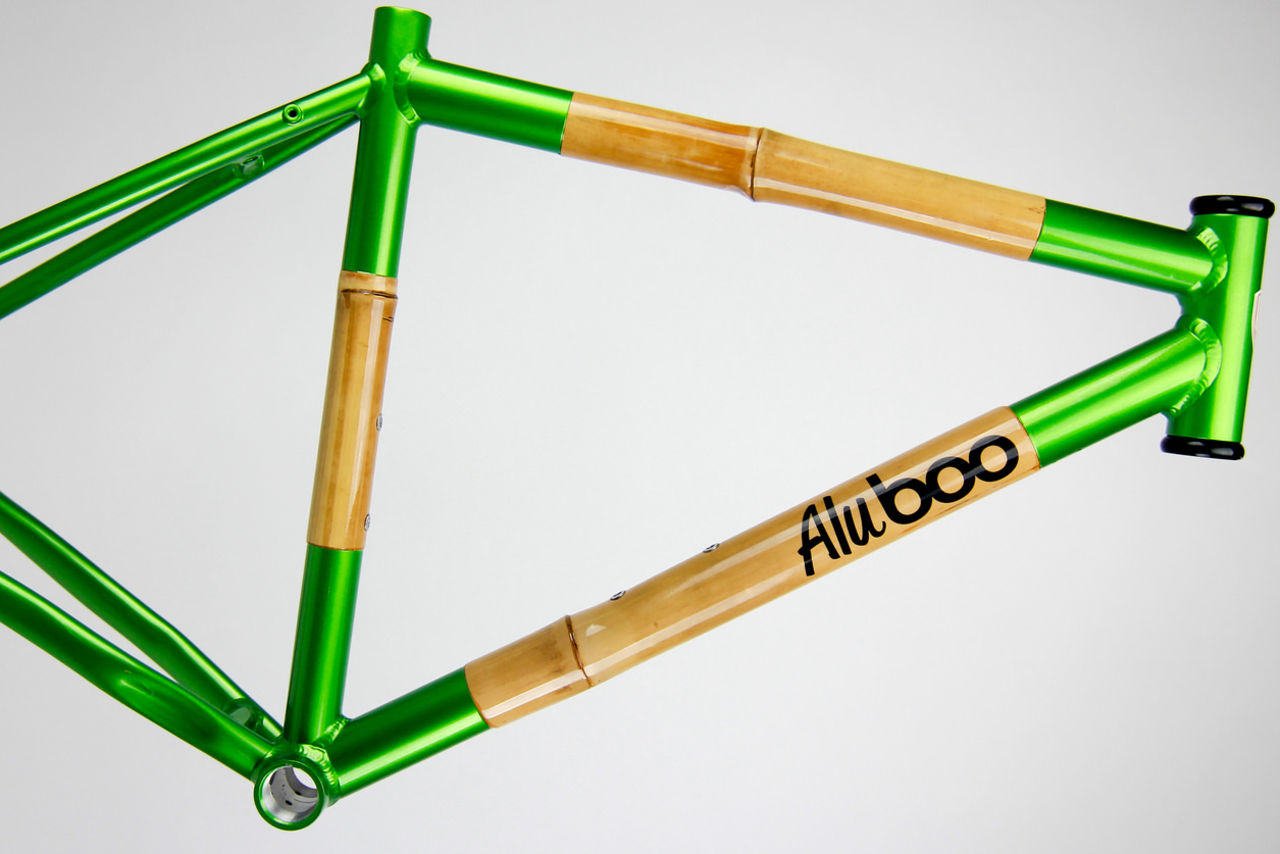 The budget-friendly Aluboo frame comes in a number of brilliant colors that contrast with the natural bamboo finish of the main tubes.

Boo offers a wide variety of models for the consumer, with bikes in the road, mountain, gravel, cyclocross, fat bike and commuter categories. The Aluboo road, commuter and cyclocross bikes, and Alubooyah cross-country fat bikes start at a very budget-friendly $895 for the frame only.

Aluboo and Alubooyah frames are built using aluminum lugs.  Bamboo poles with a slightly larger diameter than the lugs are selected. The ends of these inserts are turned down and textured for a flush fit, and aircraft-grade epoxy secures the bamboo inside hand-welded 6061 aluminum lugs. 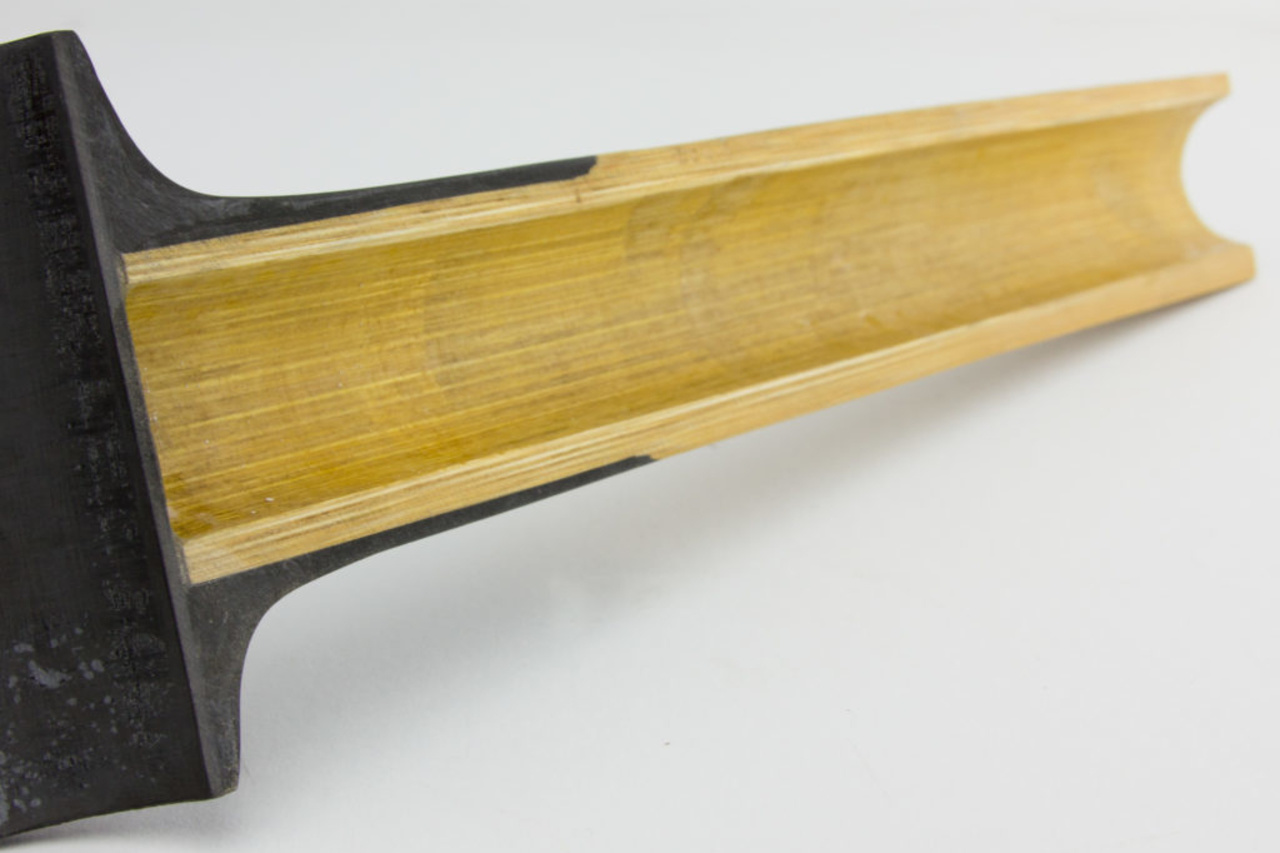 All Boo frames are built using tube-to-tube construction. The top-of-the line SL and RS-series frames use hand-cut and chiseled bamboo tubes, fitted together perfectly before being bound with unidirectional carbon fiber. Tubes are hollowed to a 3-5mm wall thickness for weight savings and stiffness tuning. The average Boo frame takes 40-50 hours of labor to construct. 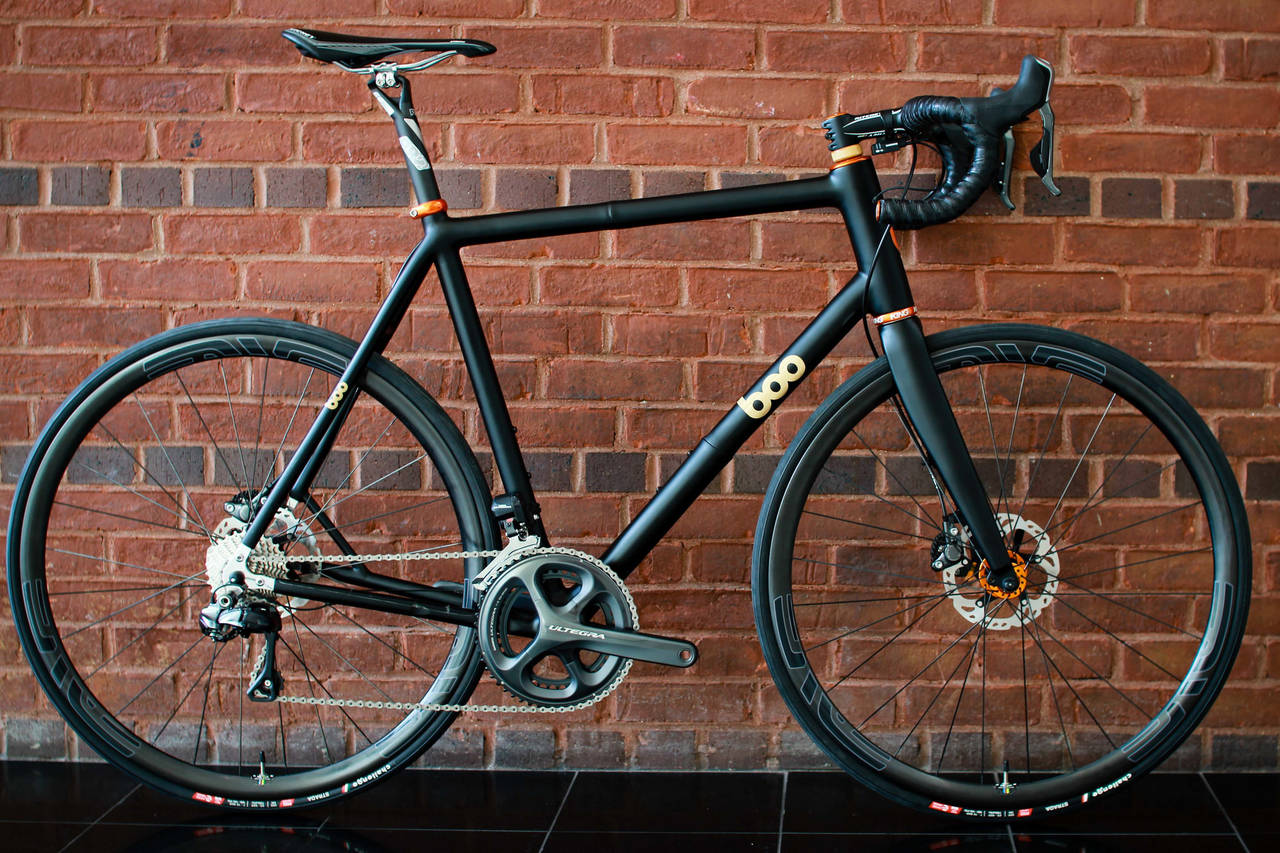 Not carbon fiber, but a Boo SL frame with custom matte black paint.

Boo offers its SL-series frames on a custom-only, made-to-order basis. Rider measurements, component specifications, and riding objectives are integrated into a custom BikeCAD geometry which, in addition to a number of innovations that increase frame stiffness without sacrificing ride quality or weight, combine to produce Boo’s marquee frame. 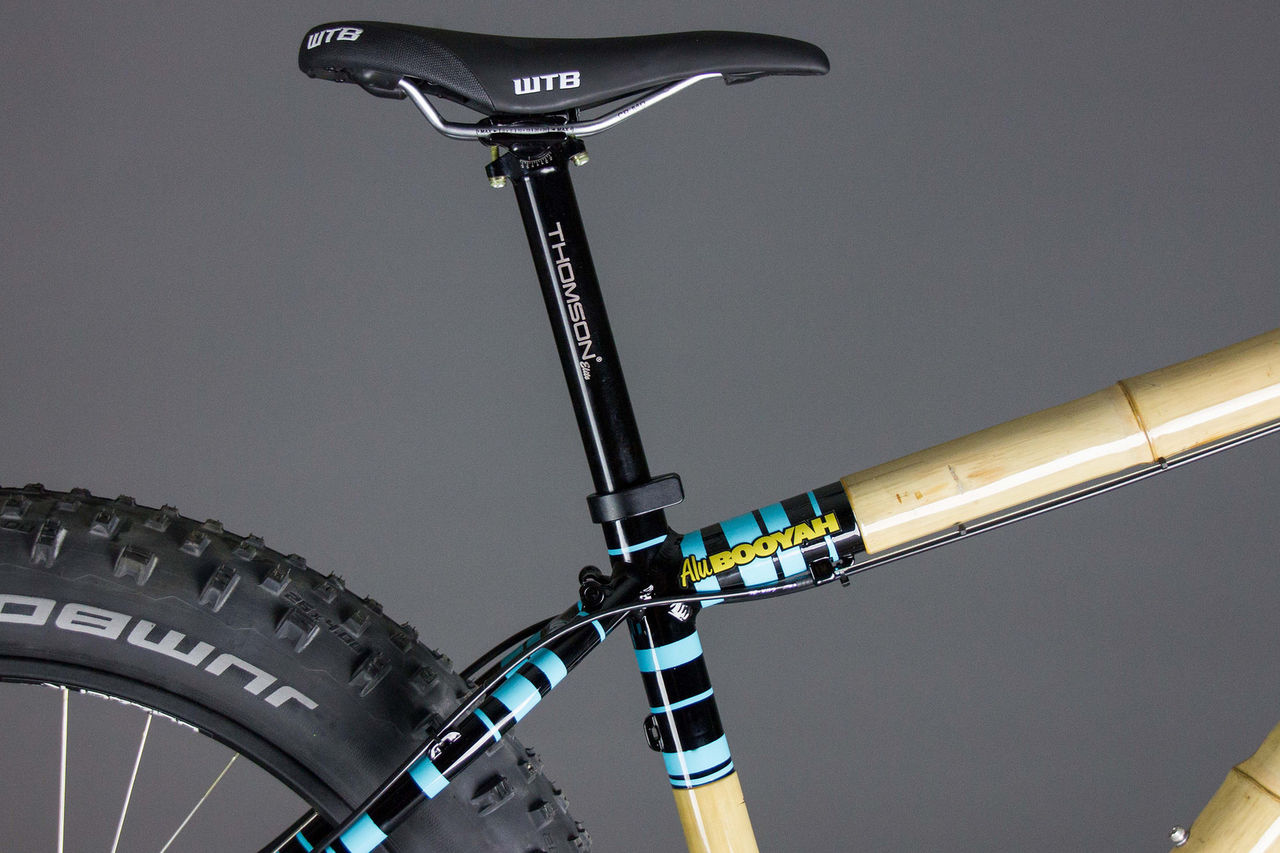 Alubooyah Fat Bike for cross-country use.

While bamboo comes from the plantation harvested as nearly perfect, organic tubesets, this most “green” of frame materials does have some idiosyncracies. One of these is the natural tendency of bamboo tubes to develop cracks. This tendency can be exacerbated when the bamboo is taken out of its natural, warm and wet south Asian environment and used in cool and dry conditions, such as found in much of the western U.S. in wintertime. Frey, the engineer, is quick to offer a scientific explanation for this phenomenon and explains why a crack in a bamboo frame should not sound the same sort of alarm bells that a crack in a carbon frame would.

“Bamboo splits because there’s nothing holding it together!  As simple as that sounds, it’s the truth. All fibers are longitudinal and a split is simply the cylindrical form “opening up” to relieve an internal stress caused by drying out. The outer fibers are more densely packed than the inner fibers, and so the inside of a pole shrinks more rapidly and drastically than the outside. This stress differential causes a small split, often at a node. Those splits are not structurally impactful, as no fiber is compromised, so it’s completely different than a carbon monocoque “crack” which causes a catastrophic failure.

“Bamboo generally splits more frequently in colder and drier conditions - different than the jungle in which it lived. We have repair kits sent out with new frames and have rarely dealt with a full warranty as a result of a split,” said Frey.

Frey admits that bamboo is not the easiest material for builders to work with, but for Boo and their customers, the effort is worth it.

“It’s difficult to work with bamboo in general, but the hardest aspect of frame construction is manipulating the bamboo into curved forms. The BOOlossal SL was one of the most demanding bike frames to build since starting the company seven years ago. It’s a fat bike with custom geometry and a 197x12 full-carbon thru-axle.  It can run the largest tire and rim combination on the market in the rear, as well as a belt drive and a Press Fit 121 BB.

“All of these design challenges were overcome with a novel and proprietary method for curving bamboo stays with heat.  Our SL Series is absolutely the most technically evolved bike frame made of a natural material on the planet, and every single one—fat or not—requires immense time, energy, design, and craftsmanship,” said Frey. 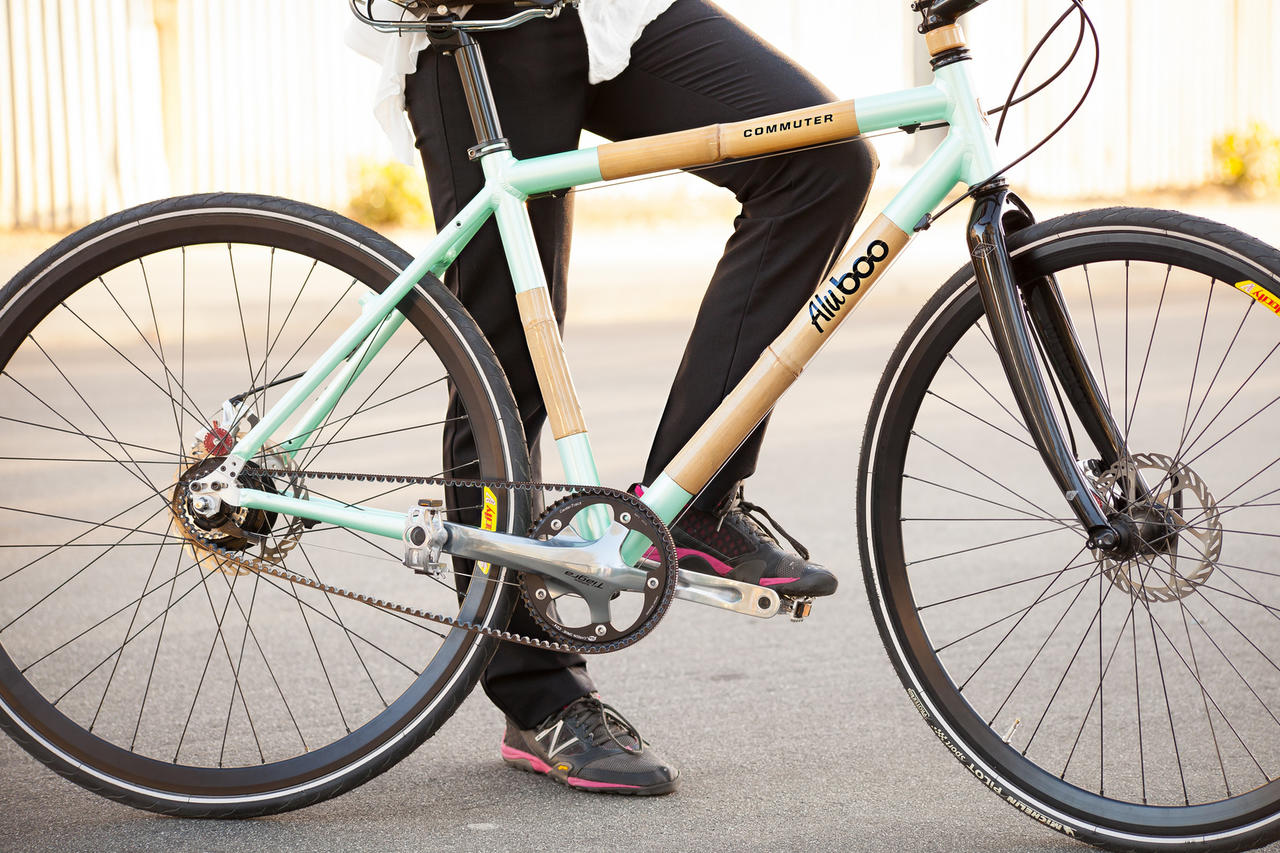 Aluboo commuter bike allows one to commute in style - and also without breaking the bank.

Boo has been ahead of the curve in the rebirth of bamboo as a 21st-century frame material. From growing and harvesting special, ideal varieties of bamboo, to high-tech structural analysis in the academic laboratory, and a baptism of fire on the rough streets and trails of the racing circuit, Boo is driving bamboo’s rediscovery as an ideal frame material for handmade builders willing to put in the effort, and is proving that this wonder grass is much more than lunch for panda bears.