When cyclists are glad to meet their makers

The Meet Your Maker event on July 23, hosted by Bruce Gordon Cycles in Petaluma, featured a swap meet as well as a ride. 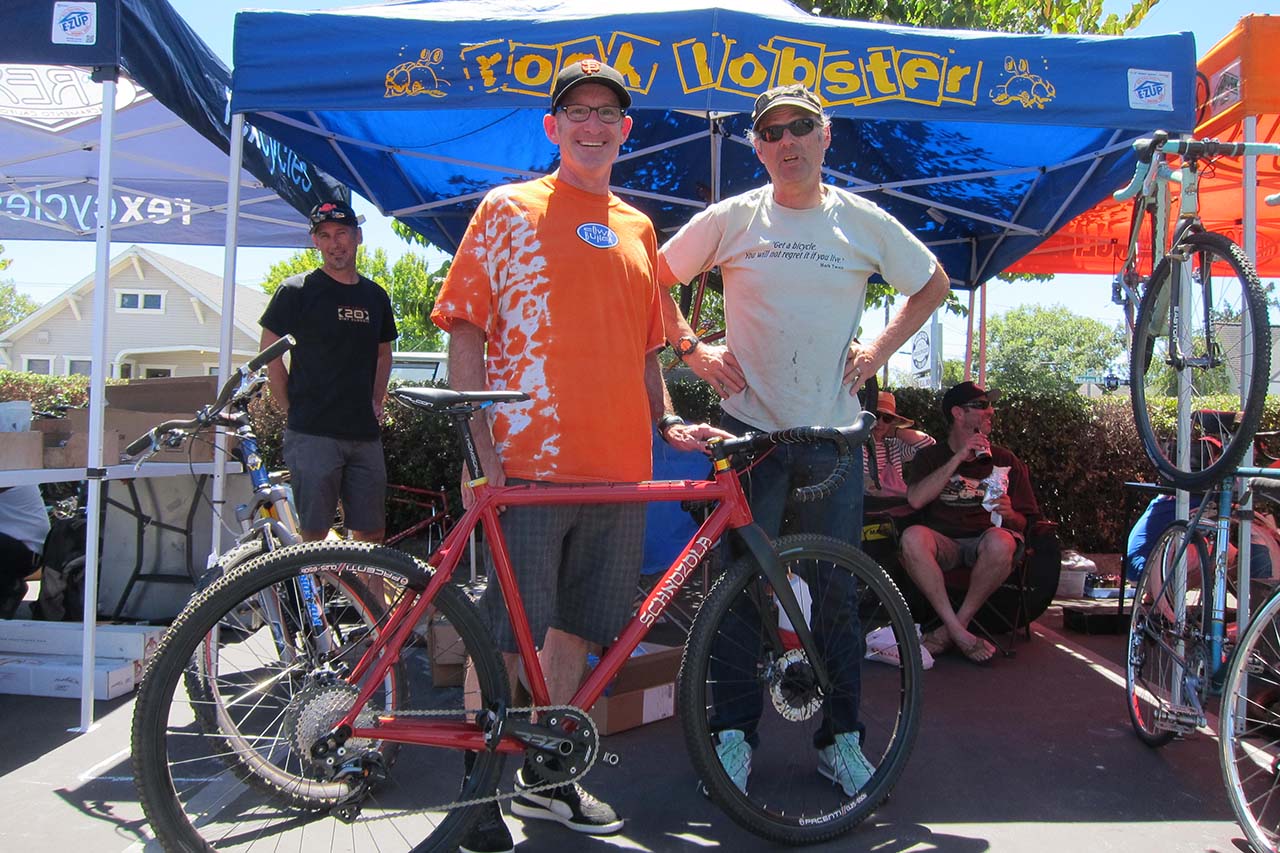 It was going to be a hot Petaluma day, this July 23, in the small black-top parking lot adjoining the small cluster of canoe and bike shops where Bruce Gordon’s place is located. The rising heat may have deterred some, but those that braved the intense sunshine found a laid-back gathering of Northern California’s finest bike making talent.

With a history going back six or seven years, Meet Your Maker events used to be solely about riding in a small group with a few big names in the frame building industry. According to their ringleader, Sean Walling of Soulcraft Cycles, that’s all changed now.

Yet the forty-odd cyclists gathered outside the Bruce Gordon Cycles shop and museum in Petaluma, California, at 9 a.m. on July 23, suggested that the original Meet Your Maker formula still has a popular appeal.

“The ride wasn’t what this, particular event was about,” said Walling. “It was really about the swap meet. But it’s nice to get out on the bike on a Saturday, and a few of the builders wanted to ride, so we still include that in some of our events,” he said.

This was the second time that Bruce Gordon has hosted a Meet Your Maker swap meet in his shared parking lot. In the welcome shade of the pop-up canopies were arrayed almost every imaginable bicycle part, tyres, and a good number of complete frames and bicycles.

Photo Gallery. Some mobile phone users will need to use this link and be signed into a Flickr account to view.

Cycling folks who showed up gladly relieved the frame builders of old and excess stock at bargain prices, but more importantly, with the chatter and banter they got to know the bicycle frame builders a tad better.

The builder relationship is a big part of ordering and owning a handbuilt custom bicycle, so these low-key events are a welcome opportunity for customers to show up find out more of what they need to know.

The frame builders, around 10 or 12 all told, seemed happy with the day. Rick Hunter of Santa Cruz sold a frame, in fact he would’ve sold two if he’d had another to sell. “I just built it up at the same time I was making a custom order, in the hope I’d sell it sometime in the future. It’s a more efficient use of time than making frames one-off,” said Hunter. “Money in the bank!” Sean Walling shouted across from the next booth.

In the booth opposite, Paul Sadoff was finalizing the sale of a fully equipped Schnozola, the budget-priced high-end bike he is making in conjunction with Bruce Gordon Cycles. “I built the frame and Bruce painted it. Now I’m going to have to pay Bruce for the paint,” said Sadoff, who has built quite a reputation world-wide with his Rock Lobster brand. Sadoff said he’d been talking prior to this weekend with the customer, Mark Leeper, who travelled 65 miles to meet this maker and his prospective new bike. Seeing the bright-red Schnozola in all it’s big-nosed glory was all the persuasion needed to close the deal.

Two booths along, Cameron Falconer, a frame builder based in Fairfax, also sold a bike. Falconer is planning to relocate his business to Quincy, in the Sierra Nevadas. “I grew up in Fairfax, but I’m ready to leave. It’s changed so much, there’s just too much bullshit in the Bay Area now, I’ve had it, there are better places to live,” Falconer explained.

A relatively new company, Squid Bikes, who are based in Sacramento, were displaying their bikes. We contract our building out to local framebuilders still, but these guys said we could set up our tent here, which was cool. People are finding out about us,” said Chris Namba, the youthful co-owner of the company.

Several of those that didn’t sell a bike still went away with more of the folding stuff than they’d arrived with. “I’ve done pretty well today,” said a grinning Curtis Inglis of Retrotec/Inglis, with a wad of notes in his hand. Sean Walling, who had hoped for a larger turnout was nonetheless content with his financial return. It’s about the same as it was last time we were here, he said.

Despite the summer heat, the turnout seemed OK to bystanders, and while there was undoubtedly plenty of business being done, visitors on a tight budget, still had the opportunity of touring Bruce Gordon’s shop and museum where he showcased his NAHBS trophies and bicycles he had built over a span of five decades.

Listening to the builders chat among themselves, one quickly gained the impression that Meet Your Maker is a lot more than just a swap meet and informal ride. Within this gathering of Northern California’s independent framebuilders, the strength of the long term friendships and business relationships was clear in the obvious camaraderie drifting between the pop-up tents in the hot midday air. Probing into the past of these relationships revealed a complex network of interconnectivity between every company present. This list included Soulcraft Cycles, Paul Sadoff and Rock Lobster, Falconer from San Francisco, Curtis Inglis of Inglis Cycles, W.H Bradford, Blue Collar Cycles, Rex Cycles, Black Mountain Bicycles, Squid Cycles, and of course Bruce Gordon himself.

Meet Your Maker grew out of social rides organized by this tight-knit group of bike makers, when they decided to let their customers join in. In a neck of the frame building woods that's committed to the anti-marketing philosophy, it maybe wouldn’t be appropriate to call it a marketing event per se, but the Meet Your Maker Tour has evolved to facilitate a stronger interface with the customers, taking the series of events away from pure bike rides. Of course it’s always a special thing to ride along in the company of famous framebuilders, but conversation on rides is not always a given. The change to a more social format seems to have been be for the better for both the frame builders and the customers in this particular marketplace.

The next Meet Your Maker event will be held at: Quincy, California, October 8th.

Kirk Stevenson contributed to this article.